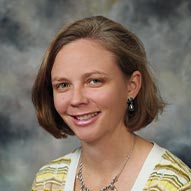 Myra Wyckoff, M.D., is a pediatric physician at Children’s Health℠ who specializes in neonatal resuscitation. She is also a professor of pediatrics at UT Southwestern Medical Center.