Jack gets back in the game after an ACL injury

After an ACL injury sidelined Jack from the sport he loves, he and his family found support and expert care at Children's Health Andrews Institute for Orthopaedics & Sports Medicine

For as long as he can remember, Jack wanted to play football.

"Every year he would ask if he could play football. I would have to tell him, ‘No, you can't play when you're 3 years old,'" his mom, Ana, says with a laugh.

Jack finally got his wish and loved every minute of it. Then, in sixth grade, he tore his anterior cruciate ligament (ACL), which is the primary stabilizer of the knee joint. He also had a meniscus tear.

"I was playing quarterback and took a late hit out of bounds during one game," Jack says.

That injury ended his season, and had the potential to end his entire career.

Jack and his parents didn't want that one hit to end his football experience, so they sought out the best surgeon and support they could find.

"My husband knew exactly what he was looking for," Jack's mom says. "He wanted an experienced surgeon who would use the latest research and technology, and we found that in Dr. Loveland."

"Dr. Loveland was great," says Jack. "He took the time to explain everything to me and got to know me on a personal level. He was honest about what was going to happen and told me it was going to be hard coming back from this injury. I knew exactly what I was getting into and was ready to do what I needed to get back on the field."

"As a parent, he was exactly the kind of surgeon you want for your child," Jack's mom shares. "The support we've received throughout our journey has been amazing. It's just unheard of anywhere else." 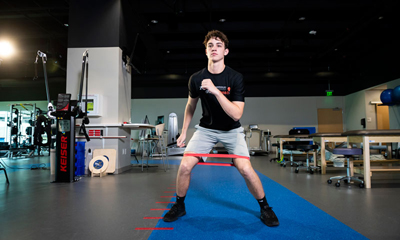 Surgery was just the first step in Jack's journey to get back on the football field. For the next year, he worked with the physical therapy team to recover from his injury and begin to build his strength.

Jack then participated in the bridge program, where rehabilitative specialists work with the strength conditioning specialists at Children's Health Andrews Institute Sports Performance powered by EXOS. This partnership allows athletes to take part in training and conditioning that ultimately helps improve performance once they return to their sport.

"Bridge gave me one-on-one attention with Josh, the sports conditioning specialist I worked with," Jack shares. "I got really close to him and he's become a role model."

Relationships were at the core of Jack's recovery – something that he attributes his success to and something that didn't go unnoticed by his parents. 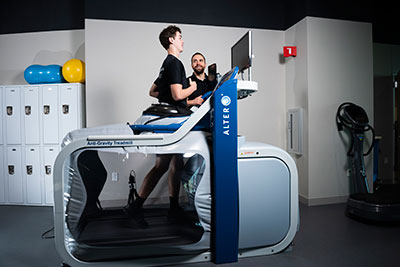 During his sessions, Jack would strength train, stretch and take advantage of the equipment available at Children's Health Andrews Institute – including the anti-gravity machine, underwater treadmill and field for speed training and conditioning.

"Everything I did, whether it was on a machine or exercises in physical therapy, centered around attention to form and building strength," he says. "I've seen a lot of guys come back from injury just to get hurt again. That's not the goal here. They want you to get healthy and be the best you can be."

That attention to detail and hard work has paid off. Track was the first sport Jack was able to return to after his injury, and it didn't take long for his persistence and hard work to show. 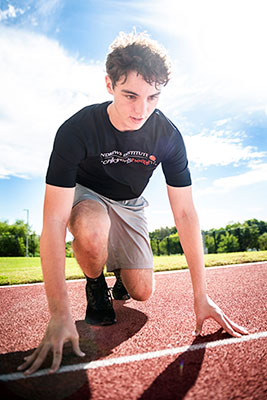 "He was named his team's most valuable player for scoring the most points at his first track meet back after his injury," his mom shares. "Josh and the team here had a big part in that – helping him improve and also encouraging him during a very long recovery."

Today, Jack is back on the football field. He's even made his high school's "A" freshman team where he feels well prepared thanks to his training sessions with Josh.

Jack looks forward to a long and successful football career in high school, and hopefully even one in college, showing that an injury doesn't have to hold you back. In Jack's case, it's made him stronger.

The only pediatric institute of its kind in Texas, the Children's Health Andrews Institute for Orthopaedics & Sports Medicine aims at reducing the number of children being sidelined from injury. Learn more about our wide range of services available to help athletes stay healthy and improve their game.

Receive the latest advice from our orthopedic and sports performance specialists – right in your inbox. Sign up for Performance Playbook, the monthly newsletter from Children's Health Andrews Institute.

Offering elite performance expertise to athletes ages 7 to 22 to help them reach their sports performance goals. We focus on injury prevention through performance training and active recovery while preparing the athlete for improving their game.