Austin Rice was a typical, active 10-year-old who loved playing baseball. One day at practice, he complained of a severe headache and within minutes began sweating profusely with no feeling on his left side.

"There was a lot of faith involved that day," said Dawn, Austin's mom. "I knew God was present because I had this strong feeling I needed to get back over to the baseball field soon after dropping him off."

When the paramedics arrived, Austin was in a seizure-like state. The ambulance brought him to Children's Medical Center Plano where doctors in the Emergency Department ordered a CT scan and suspected he had an Arteriovenous Malformation (AVM), an abnormal tangle of blood vessels that causes multiple irregular connections between the arteries and veins. 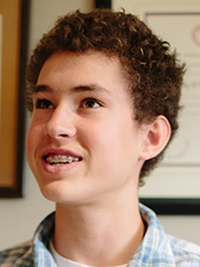 Once the scan confirmed the diagnosis, Austin was transported to Children's Medical Center Dallas, the flagship of Children's Health℠.

A team of specialists were waiting for Austin ready to assess his condition. The decision was made to monitor him overnight. Austin's blood clot was quite large creating an elevation in the pressure within his head, and his condition became life threatening when attempts to medically control the pressure began to fail. He was taken to the operating room where neurosurgeon Dr. Bradley Weprin removed the blood clot to decrease intracranial pressure without disturbing the ruptured AVM.

"The surgery was a life-saving maneuver," Dr. Weprin said. Once Austin's brain had recovered enough for another procedure, he returned to the operating room. With the use of image guidance and a new angiogram, the AVM was completely removed. Based on the malformation's location, significant risks were vision loss and motor weakness.

"Dr. Weprin was amazing with keeping us informed," Dawn said. "We moved from California to Dallas six years ago, and we could not be in a better place dealing with a brain issue. Whatever comes up, someone at Children's always knows the answer."

Specialized Care Through a Team Approach 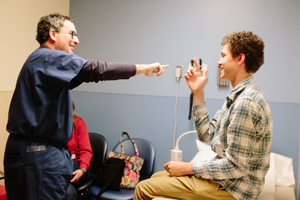 During the additional non-emergent evaluation of Austin's ruptured AVM, it was discovered that he had more AVMs within the brain that had not become symptomatic. He underwent additional testing, and it was determined that Austin has Hereditary Hemorrhagic Telangiectasia (HHT), a genetic blood disorder which causes some blood vessels to not develop properly. Austin came out of the induced coma as soon as the monitors were removed, and his recovery exceeded expectations. He spent three weeks at a rehabilitation facility where a blood clot developed in his leg. Dr. Janna Journeycake, a pediatric thrombosis specialist at Children's Health, implanted a filter to stop the blood clot from traveling to his lungs. 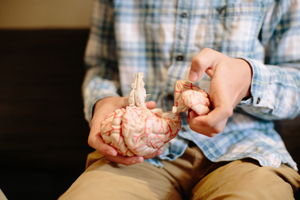 Since his initial management, Austin has undergone two gamma knife procedures to remove smaller malformations and continues to be monitored by the team of specialists at Children's Health through the Center for Cerebrovascular Disorders in Children (CCDC). This Center provides a multidisciplinary approach to patients with complex, often life-threatening disorders that impact or cause injury to the blood vessels supplying the brain. CCDC is one of only a handful of centers of its kind with nationally recognized pediatric expertise in neurosurgery, neurointerventional radiology and neuroanesthesia and specializing in Arteriovenous Malformations, stroke, Vein of Galen Malformations, Moyamoya and Cerebral Venous Thrombosis. "Watching the team work together and make decisions, their passion and commitment is evident," Dawn said. "From a mom's perspective, they could not have given my child more attention. So many went above and beyond."

Austin undergoes a neuropsychology exam every two years, and once a year visits Dr. Michael Dowling, Medical Director of the Pediatric Stroke Clinic at Children's Health, who watches for seizures and other potential issues as well as Dr. Janna Journeycake.

According to Austin, even in the midst of a scary time for him, the staff made him feel safe.

"Dr. Weprin has a brain and skull model and showed me how to build the brain and put it together," Austin said. "Dr. Dowling always makes me laugh with jokes. The therapy dogs came to my room when I went back for the AVM removal. All of this helped me to focus on other things and forget what happened," Austin said.

Austin is back in action and stays busy with school, piano and art lessons and his Eagle Scout project which involves painting a mural on a new facility for the homeless.

"You would look at him and not realize he went through all he did," Dawn said.