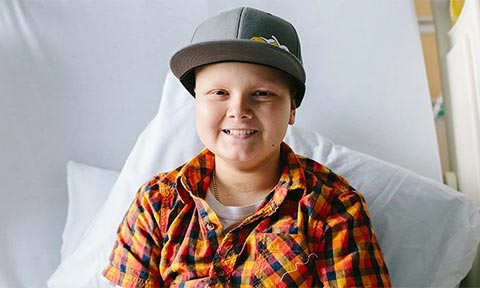 Create your own castle

Shaping the builders of tomorrow – today. Twelve-year-old oncology patient Dylan hopes to build his own video games when he grows up. In fact, this school year he is taking a digital animation class that should help him shape his skills. See how he plans to bring the Medieval Times and his very own castle to life.

At age 12, Dylan was having severe back pain. After an MRI and a number of tests, he was diagnosed with a cancerous tumor on his spinal column. He underwent 14 rounds of chemotherapy, 23 radiation sessions and two surgeries at the Pauline Allen Gill Center for Cancer and Blood Disorders. Today, he is cancer-free taking his life to the next level. Want to help kids like Dylan?

Counting down to play time

To help the time go by faster, Dylan’s mom created an inspiration board. With a countdown to the end of treatment, faith-based quotes and sweet notes from staff, it was an encouragement and a reminder of how far Dylan had come over the months. Looking for support in your child’s journey at Children’s Health℠? The Center for Spirituality of Children can help.

Learn about all our spiritual services

Taking gaming to a live audience

From helping host a game show to meeting Keith Urban, Dylan enjoyed spending time in the Seacrest Studios. Established by the Ryan Seacrest Foundation in 2012, the studios helped Dylan take his mind off chemotherapy while he learned interesting facts and played interactive games. Programs are broadcast throughout the hospital via the Red Balloon Network.