After facing multiple challenges at birth, Gabby now thrives at home with her family

When Bre and Sean were expecting their fourth child, doctors informed them that the child may face significant challenges after she was born.

"Doctors told us she may have leukemia or liver cancer, due to a seemingly large liver, and they weren't sure she was swallowing since they were never able to see bubbles in her stomach," Bre says. "They also had concerns about her heart and told us they suspected she had Down syndrome."

Gabryella – or Gabby, for short – was born in May 2018 at 35 weeks. She was admitted to the NICU at a local Dallas hospital to keep her breathing stable and assess her condition. Doctors soon ruled out any cancer in her liver, but they discovered that she was born with esophageal atresia, a rare anomaly that obstructs the upper esophagus and may cause issues breathing, swallowing and eating. Gabby was intubated to help her breathe, and a gastrostomy tube (G-tube) was placed to allow her to eat.

Gabby spent the next three months growing stronger, but she eventually needed more specialized medical care. Bre and Sean began searching – near and far – for more options for their daughter.

"Gabby's doctors were originally urging us to travel to Boston for treatment, but we soon learned of Dr. Stephen Megison who was known for the wonderful work he had done with prior patients," Bre says. "I called to make an appointment with him, and he squeezed us in the very next morning."

After meeting with Stephen Megison, M.D., Medical Director of Trauma Services at Children's Health℠ and Professor at UT Southwestern, Bre and Sean were confident that Gabby could stay "home" in Texas. After Gabby was transferred to the Level IV Neonatal Intensive Care Unit (NICU) at Children's Medical Center Dallas, Dr. Megison discovered an abnormal connection between Gabby's esophagus and trachea called a tracheoesophageal fistula that was allowing liquid to drain into Gabby's lungs. 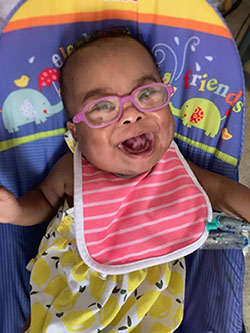 Within a week, Dr. Megison repaired the fistula by inserting a stent into Gabby's esophagus to prevent liquid from passing into her trachea. While Gabby recovered in the NICU, Sushmita Yallapragada, M.D., MSc, FAAP, Medical Director of the FETAL Center and Assistant Professor at UT Southwestern, continued to focus on her breathing, which still required significant support.

"The biggest struggle Gabby faced was controlling her secretions while keeping her breathing stable," Bre says. "She has always had to have some kind of suction since day one and still does."

By December 2018, Gabby was still intubated, which was delaying her progress toward being discharged from the NICU. Romaine F. Johnson, M.D., Pediatric Otolaryngologist at Children's Health and Associate Professor at UT Southwestern, determined that Gabby's airway was collapsing as she was breathing, a condition known as tracheomalacia. Dr. Johnson performed a tracheostomy to insert a tube into her trachea and placed her on a ventilator to help her breathe. For the next two months, doctors worked to lower Gabby's ventilator's settings to a safe level for her to be discharged from the hospital.

Our Children's House provides support for the entire family 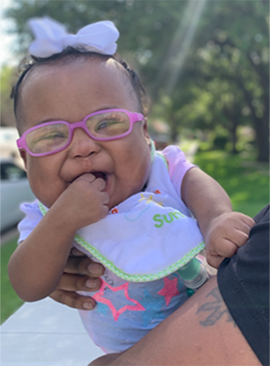 In February 2019, Gabby was discharged from the NICU and admitted to Our Children's House, which provides transitional care and inpatient rehabilitative support for patients between acute care and returning home. There, Andrew Scott Gelfand, M.D., Pediatric Pulmonologist at Children's Health and Associate Professor at UT Southwestern, monitored Gabby's progress as the team continued to lower her ventilator settings even further. Bre believes Gabby's time there played a critical role in preparing the whole family for her to come home for good.

"Going to Our Children's House was probably the best experience for us, as parents, to prepare for home life with Gabby," Bre says. "I felt more than capable to help care for her after leaving there."

By early March, Gabby – who had spent the first 10 months of her life in a hospital setting – joined her three siblings at home.

She still breathes with the support of a ventilator, but her care team continues to work to wean her off it as she grows stronger at home. Gabby works twice a week with physical, occupational and speech therapists and is making great strides.

"Gabby is rolling over, sitting up and putting everything she can into her mouth," Bre says. "She is starting to make noises over her trach which is fun for everyone to hear her voice from time to time and is showing us her personality by letting us know what she likes, including Moana and Peppa Pig!"