Mending the tiniest of hearts

London is a vivacious toddler who speaks in full sentences and loves macaroni and cheese.

"I mostly forget that she has a problem with her heart," says Chelsey, London's mom.

When Chelsey went to a routine ultrasound to find out the gender, instead the sonographer delivered heartbreaking news. London had several heart defects.

Overwhelmed by the diagnosis, Chelsey was referred to Children's Health℠ for a fetal echo and to meet with the team in The Heart Center. They explained her defects – tricuspid valve atresia, sub-aortic stenosis and coarctation of the aorta.

"It was definitely the most devastating appointment we've ever been to as we discussed what would take place," Chelsey says. "But we felt confident in the hospital and skill level and decided to move forward."

‘The team carried us through' 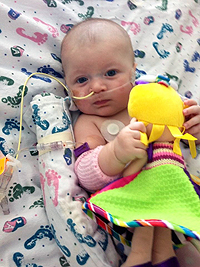 The family moved from Oklahoma City to a small condo close to Children's Health to entrust them with London's only chance at life.

London was born and immediately transported to Children's Health. She would undergo three surgeries. The first procedure, the Norwood, was performed when London was only 7 days old. She stayed in the Cardiac Intensive Care Unit for eight weeks with challenges of feeding and gaining weight.

"The time between the first and second surgery was extremely difficult for us, but our nurses and doctors completely carried us through," Chelsey says. "They were there for all our questions and stopped at nothing to intercede for us." 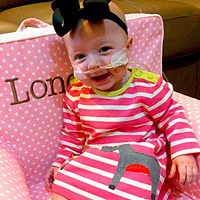 London underwent her second surgery, the Glenn procedure, at 6 months old. She excelled through that recovery and went home 10 days later. Matthew Lemler, M.D., Pediatric Cardiologist at Children's Health, checks London's saturation levels and performs an ultrasound on her heart every four to six months.

"Dr. Lemler is a very thorough and skilled doctor," Chelsey says. "We would have no other be her cardiologist. If something were to go wrong, he will catch it first." 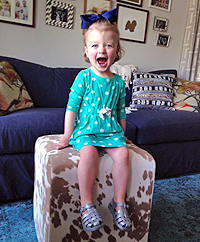 Dr. Lemler says that London has a very good prognosis.

"Other than experiencing lower saturations compared to other children, she is a normal little girl," Dr. Lemler says.

London will have her third surgery, the Fontan, when she is around 4 years old. Chelsey says that she is thankful for the Children's Health team every day that she watches her rambunctious toddler grow and thrive.

"Our experience with the team is second to none. They became family and friends we will keep forever."