A liver transplant gives an infant a new chance at life

After an infection led to end-stage liver disease, Davis and his family found hope at Children's Health

Despite being born five weeks early, Davis appeared to be a healthy and strong baby boy. But soon after going home, his parents, Anna and Frankie, noticed that Davis appeared to be showing signs of jaundice. When Davis stopped eating, the new parents brought their son to an emergency room in Fort Worth.

That night, Davis' oxygen levels declined rapidly, and he went into cardiac arrest. Anna and Frankie learned that Davis had contracted a virus in utero. The virus had moved into his blood stream and spinal fluid and was attacking his liver.

"Doctors explained that because it was a virus and not bacterial, there really wasn't anything they could do," Anna says. "Their goal was to provide him with supportive care to help keep him alive as the virus ran its course."

After four days, his physician in Fort Worth said Davis was entering end-stage liver disease and would require a liver transplant. Davis needed to be transferred to Children's Medical Center Dallas for additional support.

Jawahar Jagarapu, M.D., Neonatologist at Children's Health℠ and Assistant Professor at UT Southwestern, evaluated Davis upon his arrival. He monitored Davis' lungs, kidneys, GI tract, heart and brain function to make sure the infection hadn't spread to other organs, which could lead to multi-organ failure. 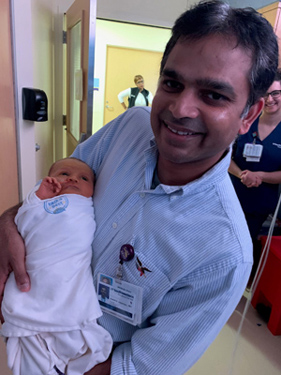 "Dr. Jagarapu was exactly the right doctor we needed at that time," Anna says. "I feel like he really took me under his wing and began to teach me what I would need to know to care for Davis."

"Stories like Davis' always remind me of how important our words of empathy matter to parents during their most difficult times," says Dr. Jagarapu. "It was a privilege to be a part of his care team."

Two weeks later, Davis tested negative for the virus and opened his eyes for the first time since coming to the hospital. Though Anna and Frankie were ecstatic, Davis continued to struggle with the lingering effects of the infection, including abdominal swelling, electrolyte imbalances, elevated ammonia levels in his blood and the inability to breathe on his own or gain weight.

Over time, Davis' liver enzymes and bilirubin began approaching normal levels and his care team was cautiously optimistic that his liver may regenerate itself enough that he would not require a transplant. Anna and Frankie even began preparing to bring him home.

A week later, however, Davis tested positive for peritonitis, a bacterial infection in his abdomen. Even though the infection was caught and treated early, it revealed the severity of damage to his liver: He had cirrhosis, solidifying his need for a liver transplant. 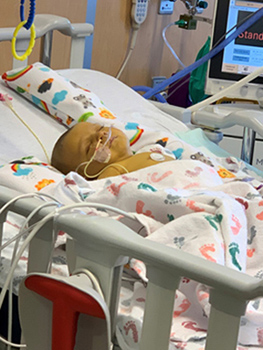 While Davis waited for a new liver, Dev M. Desai, M.D., Ph.D., Head of Pediatric Transplantation at Children's Health and Professor at UT Southwestern, informed Anna and Frankie about what to expect before and after transplant surgery.

"The transplant operation is just the first step in the transplant journey," says Dr. Desai. "I emphasize to families that the transplant team will always be at their side to help them navigate through this life-changing event."

Davis' liver was so badly scarred that he risked severe internal bleeding and damage to his kidney and other organs. His electrolytes were out of balance, causing his heart rhythm to be out of sync. He was placed on life support and received blood transfusions as his family continued to wait and pray.

"It was such a tumultuous time as we watched Davis get sicker and sicker and waited for him to receive a liver," Anna says. "It was the loneliest time of my life even though I was surrounded by people and had such great support."

Then, after two weeks of waiting, Dr. Desai informed Davis' family that a liver had become available. 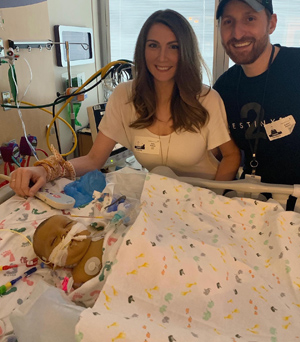 "We rejoiced for Davis and cried tears of sadness for the life that was lost and for the broken hearts of his or her family," Anna says

Eight hours after Dr. Desai's call, Davis, only 4 months old, was in surgery. At 5 a.m., after 6 hours of surgery, Dr. Desai let Anna and Frankie know that the surgery had gone well.

"I remember hugging him so tight when he gave us the good news," Anna says.

After a month of recovery – and a total of 142 days in the hospital – Davis was discharged. Because his family lives a significant distance from the hospital, Anna and Davis stayed in a nearby hotel for the next several weeks to be close for checkups. Finally, a month later, Davis was able to join his older brother, Jackson, at home for good.

At home, Davis began physical, occupational and speech therapy and returned to Children's Health every other week for follow-up visits for the next four months.

Looking toward the future and giving back 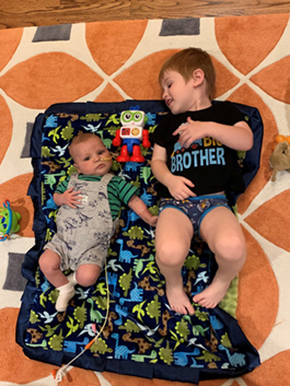 Today, Davis is doing well. His feeding tube is gone, he is growing stronger every day and his family recently celebrated a milestone that Anna and Frankie had been waiting on for quite some time: watching the Dallas Cowboys play together as a family.

"It may seem silly," Anna says. "But we have been Cowboys fans for as long as I can remember, and we dreamed of watching them play with our boys one day. For so long, we weren't sure if Davis would be here to watch with us, so it was a special moment for all of us."

As they look toward the future, Davis' family is finding ways to give back and help others. After being personally touched by the selfless act of organ donation, they are committed to spreading awareness of the growing need for organ donor registration through the Outlive Yourself Foundation.

"My son would not be here today if it weren't for the selfless act of organ donation," says Anna. "We are forever indebted to Davis' donor family and will remain eternally grateful for the sacrificial love that has changed the course of his life."

As one of the country's largest comprehensive pediatric transplant programs, we are dedicated to patient- and family-centered care that produces outcomes that exceed national standards. Learn more about Pediatric Transplant Program.