Hunter also answers to the name Superman. The little hero earned his nickname at the beginning of his journey – one that has required him to be a fighter every step of the way. 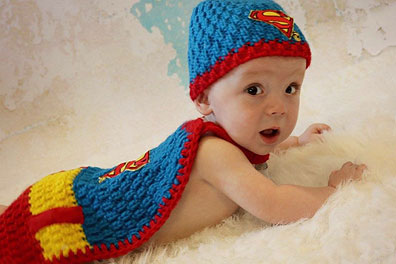 Melissa, Hunter's mom, visited her obstetrician at 28 weeks gestation. Melissa's husband, Ronald, usually came with her, but they had been out of town, so she told him not to miss work since it was just a routine sonogram. The unexpected and devastating news Melissa received moments later made her go numb all over.

"The sonographer moved past the baby's head quickly and then paused," Melissa says. "I could tell she was conflicted."

Melissa is in the medical field and asked what was wrong. The sonographer could see something on the neck and needed to get more images for the doctor.

"It was surreal staring at the screen," Melissa says. "At the end, she asked if I was okay, and I just lost it."

One week later, Melissa had a Fetal MRI that revealed a mass blocking the baby's trachea and esophagus. Hunter was not swallowing amniotic fluid and Melissa had polyhydramnios, an excess of amniotic fluid in the amniotic sac. Contractions began 10 days after the MRI, and she had fluid drained immediately.

"We continued to pray and knew that miracles happen every day," Melissa says. "Ronald and I were scared but remained a united front and kept the faith."

On December 1, 2015, Melissa and Ronald met with a team of experts from UT Southwestern at the FETAL Center at Children's Health℠. The FETAL Center provides consultation, education and treatment plans for delivery and postnatal management by bringing all the different caregivers to the family at one time. The team discussed Hunter's mass and explained the method of delivery that would save Hunter's life – the EXIT procedure.

Planning began as soon as they learned about Hunter's mass, and they prepared for all scenarios. They would successfully establish an airway route to allow Hunter to adequately receive oxygen by inserting an endotracheal breathing tube, performing a tracheostomy or resecting the mass.

Because the team only has a matter of seconds to minutes to secure an airway during an EXIT procedure, the planning stage is critical.

While the baby would die without the procedure, it carries significant risks for mom and baby.

It is a unique situation because there are two patients to take care of. The mom is at risk for bleeding because of the relaxed uterus. If an airway isn't created in time, the baby will not survive.

Hunter's EXIT procedure was scheduled for December 21. The team at the FETAL Center coordinated Melissa and Hunter’s care from that point on including staying in touch with their maternal-fetal medicine specialist and ensuring all communication pieces were intact with every caregiver involved.

"The meeting (with the EXIT team) was very organized, and it was obvious to us that they had thought of every detail," Melissa says. "We felt like we were exactly where we needed to be."

Only hours after leaving the meeting, a sonogram showed the polyhydramnios had worsened. Six days later, Melissa went into labor. Magnesium sulfate did not stop labor, and steroid shots were given to help Hunter's lungs mature faster; they could not risk Hunter delivering naturally. On December 8, the EXIT team came together, and Melissa was wheeled into the operating room at Parkland Hospital.

Ronald paced back and forth in the waiting room hoping for the best.

"He relied on faith and doctors to take care of the two people he loved the most," Melissa says. "I am so proud of how he handled it and stayed strong for all of us."

The team began the C-section as Hunter received oxygenated blood through Melissa's uterus and placenta. They quickly pulled Hunter partially from the uterus and began the intubation process. Looking through the scope, they could see his airway was obstructed. Two options remained – to move the mass off the airway or perform a tracheostomy below the mass. Time was of the essence.

Since the mass extended into the upper chest, they could not access the trachea below, so they made an incision and moved the mass off the trachea. Then surgeons performed a tracheostomy below the area, and completed a resection of the mass before closing the wound. Once the airway was secure, Hunter was able to be removed from the uterus and separated from the placenta. 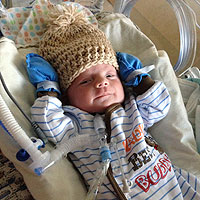 Hunter was transported to the Neonatal Intensive Care Unit (NICU) at Children's Medical Center in Dallas – a Level IV facility meaning he was receiving the highest level of neonatal care.

The NICU at Children's Health is one of a very few that have cared for this kind of patient.

Ronald was relieved that both were alive. He decided that even in the worst situation, they were going to look at it positively and only allow happiness to fill Hunter's room. If doctors needed to talk about bad news, it would be in the hallway or a different room.

After recovering in the postpartum unit, Melissa came to Hunter's bedside where all she could do was watch and pray as he stayed sedated. His airway was paper thin from being distorted at birth, so no one could touch him.

"He couldn't have any stimulation, not even diaper changes," Melissa said.

After 10 days, the sedatives were slowly reduced, and the pathology came back on the mass – a germ cell tumor. Chemotherapy was not an option because he was too fragile, and they would just have to wait and see if the tumor came back.

Taking a turn for the worse

Hunter developed pleural effusions, collections of fluid in the chest that compress the lungs, and he needed chest tubes on both sides to drain the fluid. The respiratory therapists were key components to his care and explained everything to help Melissa and Ronald feel more at ease, even when alarms were sounding on his machines.

"Fluid started building up throughout his body," Melissa said. "He looked like a marshmallow puff, and his eyes wouldn't open. He couldn't move."

On Christmas Day, Hunter's condition worsened, and he was not making urine.

"We had barely touched him since he was born, and they were offering to let us hold him," Melissa says. "It took four nurses, a respiratory therapist and a nurse practitioner to get him out of bed because of all his equipment and wires."

Ronald held out hope that his son would live. He wanted to wait and hold his son the next day.

"He didn't want Hunter to have too much stimulation and asked everyone to pray hard that night," Melissa said. "The next morning, Hunter started producing urine like you wouldn't believe, and his kidneys just came alive."

An amazing recovery for Hunter 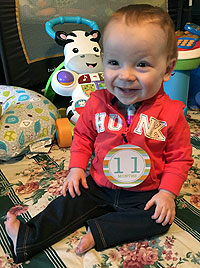 Within two days, Hunter turned a corner. His condition improved, and he woke up with a big smile. He continued to progress from that point, as he weaned from the ventilator to a machine that gave pressure only at the nose. Discharge day came much sooner than expected on February 26.

"When we went home, he was breathing on his own, only needing some oxygen at night," Melissa said.

At that time, an MRI showed the tumor coming back, but it was under the jaw and untouchable. The only option was to let it grow until surgery was necessary. By June, the time had come to go back to the operating room. The surgery once again came with risks, but there was no choice. The team worked to remove the tumors in the neck. The surgery was a success, and Hunter went home the next day.

"They did a phenomenal job," Melissa says.

'Our son is thriving' 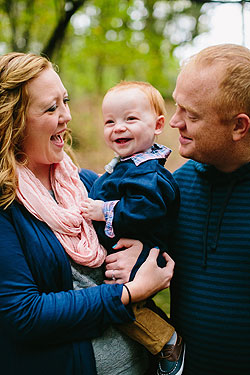 Today Hunter is crawling, learning to eat and starting to make sounds. Like any other nearly 1-year-old boy, he loves rattles and cars that light up. Besides mom and dad, Hunter's favorites are his two older brothers. Melissa says no one else exists when they are in the room.

Hunter receives several breathing treatments a day, immunoglobulin infusions to boost his immune system, oxygen at night and 24/7 home health nursing care. He visits the oncologist to watch for new tumor growth, and he visits Children's Health to have his airway evaluated regularly.

"We cannot express in words the gratitude we have for each person involved in saving our son's life," Ronald said. "Each person who fought with us and for him to survive will forever hold a special place in mine and Melissa's heart. Our son is thriving. He is a blessing. He is the definition of Superman."

Going above and beyond

Melissa says the NICU staff cared for Hunter as if he was their own.

At Christmas, when Hunter was very sick, they still had not been able to get his footprints. A special nurse wanted to surprise Melissa and Ronald. She got permission from the doctors and made his footprints into a V shape, so they looked like mistletoes hanging on his crib as decoration.

The Fetal Neonatal experts at Children's Health provide comprehensive care for any neonatal condition or diagnosis and are dedicated to improving outcomes for the tiniest of patients. Learn more about our program and services.