When Caroline was 3 years old, she was traveling with her parents and ate a pretzel from a snack bowl containing nuts in an airport lounge. Shortly after boarding the plane, a purple rash formed around her mouth. Her parents gave her Benadryl and didn't think too much of it.

"It was 1996," says Caroline. "Nut allergies just weren't as prevalent then as they are now, so it didn't really cross their mind."

A few weeks later, however, Caroline's nanny gave her a peanut butter and jelly sandwich for lunch, which Caroline immediately spit out. 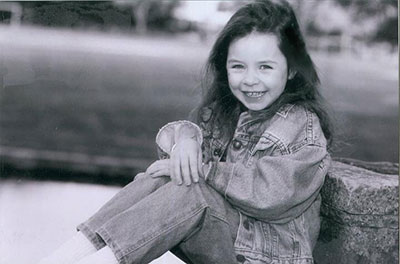 Her parents were referred to an allergist, who diagnosed Caroline with a severe peanut allergy. She and her family quickly learned to modify her diet – and their household – to keep her safe. As Caroline got older, she learned to adapt in social settings and at school, but often faced a lack of understanding from her peers and school.

"My friends didn't always understand why I couldn't join them at a particular restaurant or celebration because of my allergy, and my mom would often need to train my teachers and principal about how to protect me at school," Caroline says.

When Caroline turned 16, her allergist told her about a clinical trial for pediatric patients with peanut allergies that was being led by J. Andrew Bird, M.D., Director of the Food Allergy Center at Children's Health℠ and Associate Professor at UT Southwestern.

The study was aimed at determining if a child could build up a tolerance to their peanut allergy by ingesting a gradually increasing amount of peanut protein over an extended period of time – an experimental treatment called oral immunotherapy (OIT). Caroline joined the study during her senior year of high school.

During her first appointment, Dr. Bird and his team needed to determine the amount of peanuts it would take for Caroline to experience anaphylaxis. Up until that point, Caroline had managed her peanut allergy diligently enough to avoid such a severe reaction.

"I was in a safe, controlled environment with a team ready to respond, but it was still an uneasy time," remembers Caroline.

It took approximately one-third of a single peanut to cause a reaction, after which Dr. Bird and his team quickly administered medication to reverse the allergen's effects on Caroline's body.

After allowing her body to fully recover, Caroline began taking a measured amount of peanut flour – less than the amount that caused her initial reaction – every day for two weeks to see how her body responded. If she had no reaction, under Dr. Bird's direction, she gradually increased that amount every two weeks for the next several months.

During her time in the study, Caroline had two additional major reactions, and eventually left the study.

Caroline still considers the clinical trial a critical point in her allergy journey, as it gave her and her family a reassurance as she prepared to go off to college that the risk of a severe reaction from trace amounts of peanuts was lower than they originally expected.

"I definitely consider it a success even if it didn't 'cure me' of my allergy," Caroline says. "It taught me a lot about how my body works to fight this allergy and how it reacts, which prepared me as I entered into adulthood."

Caroline graduated from college with a bachelor's degree in Criminal Justice and Spanish, married her husband, Tyler, who is a Captain in the United States Air Force and is expecting their first child in February. She still remains vigilant as she manages her peanut allergy, but is adamant that her allergy is just a part of her life – not what defines her.

Since becoming a military spouse, she hopes to identify opportunities to share her experiences with other military families dealing with food allergies. She hopes to find more ways to increase food allergy awareness and resources on base to help others.

"Just like anyone who has a chronic illness, there's so much more to our life than just that one piece," says Caroline. "I hope that by hearing about the very normal life I have, it gives other families hope that their children with food allergies can also thrive, just like I am."

The Food Allergy Center at Children's Health is the only academic-affiliated pediatric food allergy center in North Texas. We offer comprehensive testing, diagnosis and management for food allergies and access to groundbreaking research and clinical trials aimed to develop new therapies for children with food allergies. Learn more about the Food Allergy program and services.

Allergy and Immunology services at Children's Health can help your child cope with conditions such as nasal and sinus problems, allergies, and infections due to sinus disease, as well as deficiencies in your child's immune system.