Tamara finds specialized care for a brain hemorrhage and hydrocephalus at Children's Health.

When Tranece and Terrence learned they were expecting their fifth child, Tamara, in early 2021, they assumed that the pregnancy would go as smoothly as her previous pregnancies, especially after ultrasounds and genetic testing gave them no cause for concern.

But in mid-June, Tranece began experiencing intense pain and cramping in her abdomen and lower back, causing her husband to rush her to the nearby hospital where doctors discovered she was already fully dilated even though she was only 27 weeks along in her pregnancy. Soon after, Tamara was born, weighing just 2 pounds, 7 ounces.

"The next day we were told that Tamara was a very sick baby," Tranece says. "She was positive for group B strep, had chronic lung disease and was fighting off a sepsis infection, but at that point, my husband and I thought she was underdeveloped and would need time [in the NICU] to do what she would have done inside the womb." 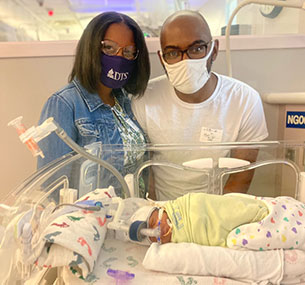 Over the next few days, Tranece and Terrence took turns by Tamara's bedside, while caring for their other young children still at home and hoping for the best. One morning, as both parents were visiting with Tamara, her neonatologist pulled them aside to deliver unexpected, life-altering news: Tamara had suffered an intraventricular hemorrhage (IVH) in her brain that led to hydrocephalus.

"The doctor explained that Tamara was at risk for developmental delays, hearing and vision problems and cerebral palsy, among other things," Tranece says. "My husband and I were in shock and we just went home, held each other and sobbed, hoping for the best, but fearing the worst."

Doctors monitored the size of Tamara's brain ventricles through weekly ultrasounds, and as the fluid in Tamara's brain increased, her doctors determined a ventricular reservoir was necessary to relieve the pressure in her skull. Because the hospital she was admitted to at the time did not have the capability to perform the procedure, Tamara was transferred to the Level IV NICU at Children's Medical Center Dallas for surgery. On July 20, Bruno Braga, M.D., Pediatric Neurosurgeon at Children's Health and Associate Professor at UT Southwestern, placed the reservoir that would allow her care team to drain the excess fluid in her brain daily. When the fluid build-up persisted, a shunt was placed that would consistently allow the excess fluid to drain into her abdomen where it can be reabsorbed.

"We wanted Tamara to be at Children's Health because they are the ones that would be working with her long-term if she needed outpatient services," Tranece says. "We knew they have specialists that are more experienced with treating babies with medical issues such as hers." 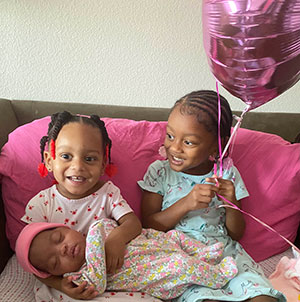 After her shunt was inserted, the fluid build-up in Tamara’s brain began to subside. She grew stronger in the NICU each day, breathing on her own and working on taking a full bottle by mouth – the milestone her family was waiting on so she could go home. That day arrived in mid-September, and Tamara was discharged from the hospital, meeting her older siblings for the very first time at home when she was three months old.

Tranece is the first to admit that their journey in the NICU with Tamara wasn't always easy, but she is hopeful that other families can be encouraged by what she has learned through the challenges.

"I felt a lot of guilt and blamed myself in the beginning, thinking if only I had gotten to the hospital sooner Tamara wouldn't be going through all these things," she says. "But I've learned that sometimes these things just happen, and we may never know why. It's natural to question things or feel some level of guilt, but we can’t stay there. Focus on caring for yourself and your baby and celebrate every milestone – no matter how small."

Tamara now weighs more than 10 pounds and is enjoying time at home with her family. She has started occupational, physical and speech therapy at home and will be closely monitored by her pediatrician at the Thrive Program at Children's Health as well as her neurosurgeon and neurologist, Jennifer Thomas, M.D., Pediatric Neurologist at Children's Health and Assistant Professor at UT Southwestern.

Though it is difficult to say exactly how her future may be impacted by her health challenges early in life, there are two things that are certain: Her family’s faith and love will provide her with as many positive experiences as possible, and her care team will ensure she has access to the resources and support she needs to reach her fullest potential.

"We just love Tamara so much, and we are so blessed to have her," Tranece says.