Faced with significant challenges at birth, a toddler can now breathe easy thanks to coordinated and specialized care

When Laura was pregnant with her twin daughters, Marlee and Lambert, a routine sonogram revealed an issue with Lambert's development in utero. After a number of tests and screenings, a cardiologist at UT Southwestern determined that while Lambert's heart was functioning normally, it was rotated on a different axis than a typical heart. Additionally, an MRI uncovered that one of Lambert's lungs was not developing properly and that her esophagus was not connected to her stomach. Instead, her esophagus and trachea were connected in several spots due to a condition called tracheoesophageal fistula (TEF), which was causing additional fluid to leak into her lungs instead of her stomach.

Knowing that Lambert would require significant medical interventions immediately after birth, Laura and her husband, Albert, decided to travel from their hometown in West Texas to Dallas to deliver the twins closer to the Level IV Neonatal Intensive Care Unit (NICU) at Children's Health℠. After two months of bed rest, which kept Laura away from her husband and three other children, Marlee and Lambert were born on March 28, 2017, with nearly 60 surgeons, cardiologists, respiratory therapists, anesthesiologists, NICU physicians, nurses and other support team members ready to respond to their medical needs. Doctors quickly inserted a breathing tube to allow Lambert to breathe, and after a quick kiss from Laura, she was admitted to the NICU.

Lambert's road to healing has its challenges

The same day, Stephen Megison, M.D., Medical Director of Trauma Services at Children's Health and Professor at UT Southwestern, performed surgery to attach Lambert's esophagus to her stomach. At one point during recovery, Lambert's vitals and lung capacity dropped dangerously low, but the attending NICU nurse, Laura, quickly intervened and stabilized her. Lambert remained in the NICU for the next 74 days, growing bigger and stronger each day, before joining Marlee and her three older siblings at home.

When Lambert was 6 months old, doctors confirmed that her left lung had failed to develop. Once again, her parents trusted Dr. Megison's skilled hands and expertise to surgically remove it.

Shortly thereafter, Lambert underwent a swallow study that revealed a cleft, or opening, in the back of her throat that was causing Lambert to aspirate food into her lungs. Lambert underwent surgery to repair the cleft, but it soon reopened. It was then that Eric Gantwerker, M.D., a pediatric otolaryngologist, informed her family they'd need to try a different approach.

"Dr. Gantwerker told me that they would need to open up Lambert's throat for the repair and that she would need to be intubated and sedated for five to seven days after surgery," says Laura. "He reassured us that if she was his daughter, he'd feel that it was the right decision, but it still wasn’t an easy one to make."

Lambert's surgery was effective, but the repair made her airway even narrower than it was to begin with, which affected her ability to breathe and ultimately led to her lung collapsing. This made extubating her a challenge.

"For a while, every time they tried to remove the breathing tube and wake her up enough to breathe on her own, her carbon dioxide levels would increase and they'd end up having to intubate her again," says Laura.

Members of her care team suspected Lambert might need a tracheostomy tube placed to help her breathe, but Laura and Albert wanted to exhaust all their options first.

"Lambert had already pushed through so many other challenges in her life that we just wanted to give her more time before taking such a drastic measure," says Laura.

Romaine Johnson, M.D., Director of the Airway Management Program at Children's Health and Associate Professor at UT Southwestern, evaluated Lambert's condition. Based on his vast experience caring for children born with TEF, he proposed a less invasive approach.

Under Dr. Johnson's direction, Dr. Gantwerker dilated Lambert’s trachea by inserting a slightly larger breathing tube down her throat that would stretch the airway. After giving the airway time to expand, the team began the process of extubating her, anxious to see if the dilation had been effective.

"It seemed like everyone who had ever met Lambert was in the room with us when they began the extubation, cheering her on," says Laura. "We started off taking it just one hour at a time and then one day at a time; after five days, she was doing really well."

Lambert continued to have her airway dilated every few weeks until eventually her breathing issues subsided and she returned home. At home, she continued her physical and speech therapy and continued to be closely monitored by Dr. Johnson and the multidisciplinary team in the Airway Management Program.

"The collaborative approach of the Airway Management Program enables us as physicians to make better decisions for our patients because we are in continual communication with others involved in that patient's care," says Dr. Johnson. "In Lambert's case especially, because we already had this model of coordinated care in place, we were able to pull from our own individual expertise to identify the best treatment that ultimately eliminated her need for a tracheostomy." 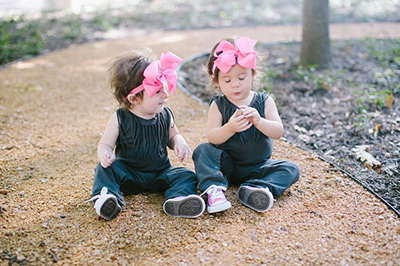 Nearly a year later, Lambert is doing great and working hard in speech therapy to resolve her feeding issues so her feeding tube can be removed. She enjoys reading books, running and dancing around with her sister Marlee and is working hard as she learns to talk.

Laura and Albert say they are eternally grateful for their "family" at Children's Health and the care Lambert has received in her first two years of life.

"I don't know that I could have made it through all that without our team at Children's, both past and present," says Laura. "Just witnessing their compassion toward Lambert was amazing. We truly bonded with them, and it’s a bond that will never end."

The Pediatric Airway Management Program at Children's Health provides personalized care and a collaborative approach to provide the best care for children’s complex airway and swallowing disorders. Learn more about our program and services.