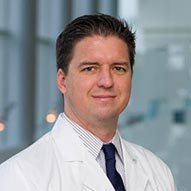 Mark Ryan, M.D., is a pediatric general and thoracic surgeon at Children’s Health℠. He is an assistant professor of Surgery at UT Southwestern. Dr. Ryan specializes in trauma and critical care and his clinical interests include ECMO, chest wall anomalies and neonatal surgery.

Dr. Ryan earned his medical degree from the Albert Einstein College of Medicine with a distinction in surgical research. He completed his surgery training at Jackson Memorial Hospital, which included two years of clinical research in trauma. He completed his surgical critical care at Le Bonheur Children’s Hospital followed by a fellowship in pediatric surgery at Arkansas Children’s Hospital.

Dr. Ryan lives in Dallas with his wife and their two children. In his spare time, he enjoys hiking and building customized computers.