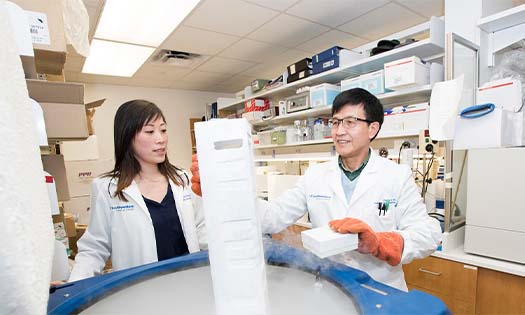 Eosinophilic esophagitis (EoE) is a complicated condition, and diagnosis and treatment have continued evolving since it was first described in the 1990s. The latest example: Proton pump inhibitors were classified as an EoE treatment in 2018, and simultaneously removed from the EoE diagnostic algorithm.

Edaire Cheng, M.D., Pediatric Gastroenterologist at Children’s Health℠ and Assistant Professor at UT Southwestern, played a key role in this change and is a leader in EoE treatment as Medical Research Director of the Dallas Eosinophilic GI Diseases and Esophagitis Program (DEEP) at Children’s Health. She spoke about PPIs and EoE at the 2019 Pediatric Academic Societies Meeting.

"We’ve learned that PPIs block a key proinflammatory cytokine,” Dr. Cheng says. “Because of this research, physicians now have another safe and effective option to offer patients, beyond steroids and elimination diets."

The Challenges of Diagnosing EoE

EoE is a chronic, immune-mediated disease that causes esophageal inflammation. Many EoE symptoms – heartburn, nausea, chest pain when eating – overlap with gastroesophageal reflux disease (GERD), and it can be difficult to differentiate the two. In the past, an 8-week high-dose trial of PPIs was used to rule out inflammation related to GERD.

“One of the biggest assumptions was that PPIs only blocked acid,” Dr. Cheng says. “So, if a patient responded to PPIs, we automatically assumed they had reflux disease and not EoE.”

Why Do Some EoE Patients Respond to PPIs?

This assumption broke down as new studies showed patients with EoE symptoms and histology – but no evidence of GERD – responded to PPI treatment. This condition become known as PPI-responsive esophageal eosinophilia (PPI-REE).

“On a microscopic and genetic level, PPI-REE and EoE match up very well, and they are clearly different from GERD,” Dr. Cheng says. “So why would PPIs work with EoE?”

PPIs Do More Than Inhibit Acid

To answer that question, Dr. Cheng and her team studied patients’ cell cultures. They found that omeprazole (Prilosec) blocks the secretion of eotaxin-3 – a proinflammatory cytokine that recruits eosinophils to the esophageal mucosa.

“After PPI-REE patients were treated with PPIs, both the genetic and protein expression levels of eotaxin-3 in their esophagus returned to normal (or near normal) levels,” Dr. Cheng says.

In 2017, Dr. Cheng joined EoE researchers from around the world at the AGREE conference (A Working Group on PPI-REE). After reviewing data from multiple studies – including Dr. Cheng’s findings – the researchers removed PPI trials from the diagnostic algorithm and classified PPIs as a treatment instead.

“I like to offer all three options to my patients, and choosing the best option really comes down to their individual lifestyle,” Dr. Cheng says. “Some have better success rates than others, but it also depends on how well the patient will adhere to a particular therapy.”

A multidisciplinary treatment approach is also important. At Children’s Health, the EoE program brings together gastroenterologists, psychologists, allergists and other specialists.

“Many of these kids have allergies, and then there’s the psychosocial issues that come with chronic GI conditions,” Dr. Cheng says. “Bringing several disciplines together helps deliver the best care for every patient.”

Learn more about the work we’re doing to find new solutions to the most complex conditions.