After a challenging first year and frightening diagnosis, Harper shows she has the heart of a warrior

When Brittany went in for her 20-week anatomy scan during her pregnancy with her daughter Harper, she and her husband, Ben, didn't expect to see anything out of the ordinary. Even when the technician had difficulties seeing all four chambers of Harper's heart, the couple was told not to be too concerned and that maybe it was just the way she was positioned in the womb at the time. The couple scheduled a follow-up sonogram with a specialist four weeks later. It was an appointment Brittany and Ben will never forget.

"During the next sonogram, the specialist confirmed that Harper's right ventricle was severely underdeveloped and very small," Brittany says.

From there, Brittany and Ben were referred to Penn Laird, II, M.D., Pediatric Cardiologist with Pediatric Heart Specialists, a Children's Health℠ Care Network Partner, who walked them through what to expect from Harper's diagnosis.

"Dr. Laird shared his plan for single ventricle kids with us," Brittany says. "He drew pictures to help explain what was going on in Harper's heart and took the time to answer our questions, and we left our first appointment feeling good with the information we had."

The road to overcoming a single ventricle heart defect

Most single ventricle heart defects require a series of open-heart surgeries to repair and support the heart after birth. Brittany and Ben met with a cardiothoracic surgeon and the team at The Heart Center at Children's Health to prepare for Harper's delivery and care after birth.

"One of the really great things about working as part of the team at Children's Health is having access to world-class care, whether it be surgery, heart catheterization or ICU services," says Dr. Laird. "I knew that Harper and her family could be in for a long road, but I always had confidence that, with the help of our team, they could overcome every potential obstacle." 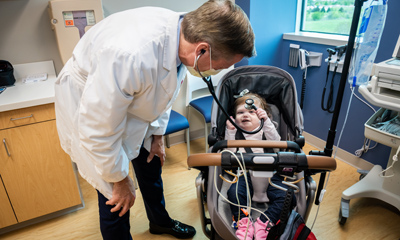 In March 2019, Harper was born. She was intubated and transferred to the Cardiovascular Intensive Care Unit (CICU) at Children's Medical Center Dallas the next day.

"It was overwhelming to see Harper with so many lines and tubes, but her strength kept me going," Brittany says.

Harper's original care plan was to undergo open heart surgery within her first week of life. Instead, a cardiologist inserted a catheter through a small incision in her neck. Then they placed a stint in her patent ductus arteriosus (PDA) to allow better blood flow to her lungs and send more oxygen to the rest of her body.

"It was such a miracle that we were connected with Dr. Laird and Children's Health where they had the capability to do the procedure in the cath lab," Brittany says. "We feel very fortunate that she didn't have to have the first open heart surgery."

Life in the hospital and open-heart surgery

Harper continued to grow stronger each day but spent only a handful of days at home over the next several months. Throughout this time, her older sister, Payden, who was just 2 years old at the time, visited when she could. Child Life specialists rallied around the family to help explain Harper's progress in a way she could understand.

"Not only did the Child Life specialists help me understand things and cope with what was going on, they included Payden in her care and made sure she was ok too," Brittany says. "They even wrapped a birthday present for Payden from Harper. It was just phenomenal." 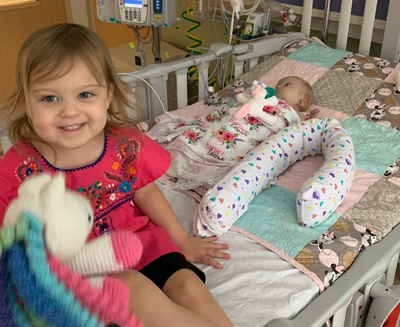 In September 2019, Harper had open heart surgery to make further repairs and adjustments to her heart. This would allow oxygenated blood to flow more freely to her body and relieve the pressure in the right side of her heart. The seven-hour surgery went well, but a few days after surgery, her lung collapsed. For the next week, Harper was medically sedated and paralyzed while her body recovered.

Harper remained in the cardiac ICU until Halloween, which would be just one of several holidays she and her family celebrated in the hospital during her recovery.

"We spent Thanksgiving and Christmas in the hospital and, again, the Child Life team was just amazing," Brittany says. "They made sure Santa had a present for Harper and Payden and it meant so much to us all."

Headed home after nearly a year in the hospital

Finally, in January 2020, after 316 days, Harper was discharged from the hospital and slept in the crib that had been waiting for her at home for almost a year. She still required oxygen support and was fed through a GJ-tube, which delivers food directly into her small intestine, but for her parents and big sister, it was the moment they had all been praying for.

Dr. Laird closely monitored Harper's progress over the next few months, which included additional hospitalizations due to infections and other illnesses that her body had difficulties fighting. In April, Harper's oxygen needs began increasing, so Dr. Laird suggested the team take another look at her heart to determine what might be causing the problem.

In May 2020, a heart catheterization procedure revealed Harper had pulmonary vein stenosis, a condition that causes abnormal scarring in her pulmonary veins. This also causes the walls to thicken and reduces the amount of oxygen-rich blood that can flow from the lungs back to the heart. For Ben and Brittany, the diagnosis threatened the last bit of hope they clung to for Harper's journey.

"We expected to receive good news that day, and instead, the surgeon shared that she had PVS and we didn't have many options to move forward," she says.

The next month, Harper had a specialized procedure to attempt to clear the blockages in her veins and restore blood flow to her lung. The family wasn't sure what to expect, but Harper's heart and lungs responded well to the procedure and she was able to go home the next day. By July 2020, she no longer needed oxygen and her doctors have continued to be incredibly encouraged with her progress as she returns for repeat procedures every few months. 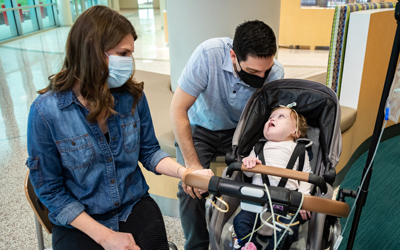 "When we first heard of pulmonary vein stenosis it crushed us and the fear of the unknown suffocated us," Brittany says. "With everything we have heard about PVS we expected to be on a different path, but Harper is an absolute warrior and we have been so blessed with miracles big and small all along the way."

Harper is now 2 years old and full of laughter, life and smiles. She is working on her balance and sitting up independently. Her favorite game is to see how many times her big sister will pick up her toy after she's thrown it on the ground. As she continues to grow, Dr. Laird will keep a close eye on her developing heart to determine what the best plan is for her. Her parents are confident she can handle whatever that may be.

"She has come so far and been through so much already," Brittany says. "She is the strongest little one I've ever known, and we know her story isn't finished yet."

Cardiac catheterization intervention techniques can treat a variety of heart conditions in children. Learn more about these procedures at Children’s Health.