For Reagan, life revolves around the baseball diamond. He went to his first Texas Rangers game when he was just 1 month old, and his parents, Jaimee and Leo, have run a youth sports organization for the past several years. He's often the first one out on the field and the last one to leave, so it can come as a surprise to new friends that Reagan was born with a disease that can cause crippling pain and organ damage.

About one week after Reagan was born, his pediatrician notified Jaimee and Leo that there was an abnormality in his newborn screening. He suggested they run the test again, in case there had been an error, and reassured the new parents that it was probably nothing to worry about. But much to everyone's surprise, the test results confirmed the original findings: Reagan was born with sickle cell disease (SCD).

"There are a lot of myths and misconceptions about sickle cell disease in that it's often associated only with people of Black or African descent," Jaimee says. "My husband is Hispanic, and I am white, so they kept redoing the test because they thought it was so unusual for him to have it."

Reagan was referred to the Pauline Allen Gill Center for Cancer and Blood Disorders at Children's Health℠ where a team of specialists began working with Reagan and his family to identify the best approach to managing his disease.

"Sickle cell can be hard to treat because it presents differently in each patient," Jaimee says. "Reagan's issues were mostly related to pain crises, but even those didn't always appear typical of sickle cell disease, especially during his first six years." 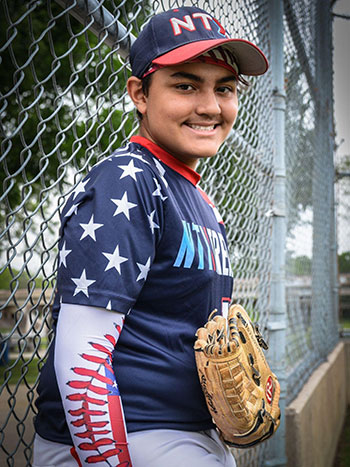 Reagan does not have the most common variant of sickle cell disease, and for most of his life, there have not been effective treatment options to offer due to lack of available FDA-approved therapies. Even today, there are only a few options available and curative treatments are still being actively researched. Instead, his family has looked to over-the-counter medications and herbs to help manage his disease whenever possible.

As Reagan grew older, he began working with a psychologist at Children's Health to develop a personalized plan that would empower him to manage his pain through mental exercises. Years later, he continues to rely on the coping skills he learned through the exercises.

"Reagan has realized that even in the midst of a pain crisis, he does not want intravenous pain medication because it impairs his ability to use his mental exercises to distract himself from the pain," Jaimee says.

Over the years, Reagan and his family have largely been able to manage his disease at home. Now a teenager, Reagan takes a more active approach in his care and is great at advocating for himself when it comes to his academic and athletic pursuits. He supports his younger brother, Leo, age 10, who was also born with sickle cell disease, and aims to set an example for how to take care of himself to avoid severe symptoms.

"We decided when he was born that we were going to let him be active and not wrap him in bubble wrap," Jaimee says. "Sometimes that means we have to make accommodations to make it work – extra rest breaks, increased hydration – but he knows what he needs and is learning to ask for it at school and on the playing field."

Alecia Nero, M.D., Hematologist/Oncologist at Children's Health and Associate Professor at UT Southwestern, has played a large role in supporting Reagan as he develops the skills he'll need to manage his disease as an adult patient in just a few years.

"Reagan is part of our Sickle Cell Transition Clinic which is specifically created to prepare him and his family for changes in his care as he becomes an adult," says Dr. Nero. "There is an increase in mortality during the young adult years when patients are transferring from pediatric to adult care so being able to partner with families like Reagan's during this critical time gives the best chance of a successful process."

An opportunity to spread awareness on the baseball field

"I don't mind when my friends ask me about it," he says. "I think it's important to help others learn about sickle cell disease."

In fact, Reagan is combining his love of baseball and his desire to increase awareness at an upcoming baseball tournament, which will be held on June 19 on World Sickle Cell Day.

Reagan worked with a uniform company to design special uniforms in honor of sickle cell awareness – from the hats all the way down to the socks. He is also working with the tournament director to sponsor a blood drive and Be The Match registry drive at the tournament.

"To have so many people come together to support his efforts has been amazing to see," says Jaimee. Dr. Nero and Reagan will continue to work together to monitor his disease over the coming years and make adjustments to his care and management as needed.

"We do our best as a team to ensure that patients like Reagan do not let SCD get in the way of their bright futures while effectively managing a complex disease," says Dr. Nero.

With the support of his family, his care team and his teammates, there's no question Reagan will continue to knock it out of the park.

The Pediatric Sickle Cell Disease Program at Children's Health is one of the nation's largest and most distinguished programs for treating children with sick cell disease. We provide comprehensive care with a focus on the prevention of disease complications using the newest treatment strategies. Learn more about our program and services.