When Tina Myers received a call from her son’s gymnastics coach in September 2015, it was unsettling news – her son, Phillip, who was 13 years old at the time, had been injured at practice. He had landed awkwardly on his ankle, and something wasn’t right. It would be frightening news for any parent, but for the mom of an elite athlete it was especially alarming. Mrs. Myers immediately picked up Phillip and raced him to the ER at Children’s Medical Center Plano. 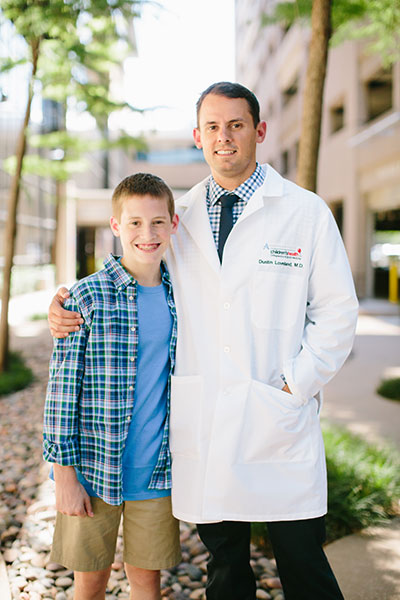 Dustin Loveland, M.D., an Orthopedic surgeon at the Children’s Health℠ Andrews Institute for Orthopaedics and Sports Medicine, was on call that night. After reviewing the X-rays, Dr. Loveland broke the news that Phillip’s ankle would need surgery. “Though not an uncommon injury in young athletes, the break was positioned below the growth plate and above the cartilage, which is a little challenging,” he explained. “Positioning the bone correctly is a little like threading a needle.” Before going into surgery, Mrs. Myers declared very matter-of-factly, “Do what you have to do, but please be aware that Phillip is a very good gymnast and wants to be in the Olympics.”

Dr. Loveland successfully placed two screws in the bone, and Phillip was sent home in a cast to mend over the next four weeks. When Mrs. Myers showed Dr. Loveland a video of Phillip performing, “It was only then that I realized she wasn’t exaggerating,” Dr. Loveland recalls. “He is a level 10 athlete, and among the best I’ve seen for his age group.”

Phillip, for his part, was the model patient. He always had a smile on his face and followed his rehabilitation instructions to the letter – just like he would a gymnastics routine. In December, when the bone had completely healed, Dr. Loveland removed the two screws from his ankle, and Phillip was ready to “climb back up on the horse that threw him.” Mrs. Myers now holds onto the screws for posterity.

For Dr. Loveland, who has seen his share of sports injuries throughout his career, connecting with patients like Phillip is about returning them to optimal health so they can get back to pursuing their dreams. “One of the greatest joys in doing what I do is seeing my patients get back on the field,” he says. “As a matter of fact, I plan on going to see Phillip at a gymnastics meet soon. I wouldn’t be the least bit surprised if we see him on the U.S. Olympic Team sometime down the road.”