When a hand injury threatened to sideline David from the game he loves, he found the help he needed at Children's Health

David started playing football in the fourth grade. In high school, he was the team's starting running back, and like many football players, he had grown accustomed to the physicality and intensity the game is known for – especially in Texas. So when he started to feel pain in his left hand after a home game in September 2017, the high school senior didn't think much of it.

His school's athletic trainer fitted David with a protective cast around his thumb that allowed him to play the remaining games of the season. However, when he continued to have pain after the season ended, doctors determined David would need surgery to repair a torn ligament between his thumb and forefinger.

A family searches for a pediatric hand surgeon

In November 2017, David met Purushottam Nagarkar, M.D., a pediatric hand surgeon at Children's Health℠ and Assistant Professor at UT Southwestern, who confirmed the damage to his ligament and outlined what would happen during surgery.

"Dr. Nagarkar made us feel comfortable from the start," says David's father, Sam. "The time he shared with us, the questions he asked and his answers to our questions all gave us lots of reasons to have confidence in his knowledge, experience and skill as a surgeon."

On Dec. 4, 2017, David returned to Children's Medical Center Dallas for surgery. Though his family trusted Dr. Nagarkar, his father was still anxious as they prepared him to go back into the operating room.

"I knew David was in good hands, but I prayed quite a bit for everything to go well," Sam says.

A speedy recovery gets David back in the game

After surgery, Dr. Nagarkar informed David's family that the surgery had gone even better than expected and explained what his recovery process and timeframe would look like.

"Normally after this type of surgery, a patient would be in a cast for six weeks before they can even begin any rehabilitation activities," says Dr. Nagarkar. "However, because we were able to repair his ligament using a newer surgical technique, David began therapy almost immediately." 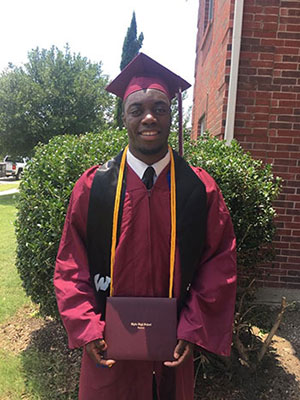 David went home the same day of surgery, and began physical therapy with a hand therapist the next day. By the third week, his hand had healed so quickly that his cast was removed; he had regained so much strength in his fingers that he was able to continue his therapy regimen on his own at home. Just two months later, David was cleared to resume weight lifting activities, and at three months, he returned to the football field to prepare for his upcoming college career.

Dr. Nagarkar continued to follow David's progress over the next several months, checking in on how he was feeling and his post-graduation plans.

"Dr. Nagarkar showed genuine interest about what was ahead of David, asking questions about his college choices, his pursuit of football and, most importantly, his focus on academics," says Sam. "We know we were just one of the many patients he sees every day, but what makes him special is his ability to make you feel he truly cares about your child as an individual."

In 2018, David earned a scholarship to play football at a university in South Dakota. He's feeling as healthy as ever and looks forward to a college career full of possibilities.

The pediatric hand surgery team at Children's Health provides comprehensive treatment for hand injuries in children, with the goal of getting kids back to the activities they love using the most minimally invasive approach. Learn more about our program and services.