On August 22, 2014, Cason was born in Greenville, Texas. His mom, Carla, quickly sensed something was wrong.

"His chin looked sunken in, his tongue was enlarged and his doctors seemed concerned," she says.

Cason remained in the hospital for nearly a month, but continued to have difficulties breathing and eating. On September 19, the Children's Health transport team brought Cason to the Level IV Neonatal Intensive Care Unit (NICU) at Children's Health℠. Within hours, he was evaluated by specialists from the Ear, Nose and Throat team as well as James Seaward, M.D., a pediatric plastic and craniofacial surgeon and Assistant Professor at UT Southwestern. The team diagnosed Cason with Pierre Robin sequence, which is associated with a myriad of craniofacial issues, including a cleft palate, a small jawbone and a tongue that does not properly fit within their mouth, which can cause breathing and feeding issues.

After much deliberation and input from his care team, Cason's family ultimately chose option three.

"It was a scary journey," Carla says. "We prayed about which option to choose, but his surgeon recommended the chin distraction, and we felt confident and safe with him leading the care of our child."

Cason's surgery and recovery is a collaborative effort

Prior to surgery, ENT experts inserted a camera scope into Cason's nose and through his upper and lower airways to make sure there were no obstructions or lesions that might cause complications during the procedure. Dr. Seaward then made an incision through his jaw bone and inserted a distraction device on each side of his jaw that would slowly separate the bone, causing new bone to grow and the jaw to lengthen. Cason was sedated for 10 days following surgery while his parents alternated time at his bedside and caring for his older sibling at home.

Throughout his surgery and recovery over the next several months, the ENT team followed his progress closely. During his recovery, he developed severe acid reflux and began aspirating food into his lungs so when he had the hardware from his jaw surgery removed, a surgeon placed a G-tube to alleviate his feeding issues.

Finally, on December 10, baby Cason was able to go home for the first time. 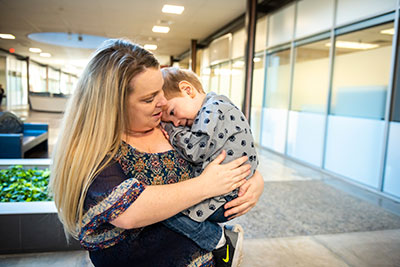 Over the next few years, Cason continued to be seen by a number of additional specialists at Children's Health, including pediatric gastroenterologists, plastic surgeons and speech therapists, among others.

He needed surgery to repair his cleft palate, during which Seckin Ulualp, M.D., also inserted tubes into his ears to help drain fluid from his middle ear – an issue often seen in patients with cleft palate.

"One of the things we're very proud of is that we are able to work closely with other teams to coordinate our patients' care," says Emily Roman, a Physician Assistant on the ENT Team. "This improves patient safety by eliminating the need for additional surgeries and is more convenient for our patients and their families."

In September 2017, a sleep study read by Anna Wani, M.D., at the Children's Health Sleep Disorders Center revealed Cason suffers from mild sleep apnea, a common side effect in patients with craniofacial anomalies. Since then, he has been followed closely by ENT specialists who will determine if he needs to have his tonsils removed to correct the issue.

Cason still has some obstacles to overcome on his journey, but is a happy 4-year-old who is learning to walk, exploring new things every day and enjoying his favorite foods – macaroni and cheese and quesadillas – since his feeding tube was removed. His mom Carla is certain of one thing: coming to Children's Health was the right choice.

"We couldn't have asked for better bedside manner," Carla says. "The entire team at Children's Health has a passion for children, and I know they saved my child's life."

Children's Health is the only pediatric hospital in the region with the depth of experience and breadth of specialties to undertake the most complex clinical care. The Pediatric Ear, Nose and Throat Program offers the largest group of ENT pediatric doctors in North Texas, providing comprehensive and expert care for children with ENT issues. Learn more about our ENT services.

The Sleep Disorders program at Children's Health is accredited by the American Academy of Sleep Medicine and treats all forms of pediatric and adolescent sleep disorders.