Mya dances through life after a successful liver transplant

After experiencing liver failure as an infant, Mya is thriving 10 years after her transplant at Children's Health

Dance has been a part of Mya's life for as long as she can remember. Her teachers and classmates are like extensions of her family, and the dance studio feels like a second home. Over the years, she has learned how dance can tell a story in a new way, and when it was time for her to perform a solo piece in this year's spring dance competition, she knew exactly the story she wanted to celebrate: her 10-year anniversary of the liver transplant she received as an infant at Children's Health℠.

When Mya was born, all signs pointed to a happy and healthy baby. Though she was born three weeks early, she weighed over 7 pounds and seemed to be a mellow baby who, "nursed like a champ," her mother, Krista, says.

Over time, however, Krista and her husband, Sye, began noticing small details about their daughter that caused concern. They would bring up each symptom to her pediatrician, but there was always a reasonable explanation. For instance, Krista's questions about Mya's skin tone were attributed to their ethnicity, and her concerns about Mya's distended belly were explained by her rib cage proportions looking different because she had such a petite frame.

"Her pediatrician was never dismissive of my questions, but she didn't believe there was anything there to lead us to believe anything was wrong," Krista says.

By her four-month appointment, however, neither Mya's parents nor her pediatrician could ignore the signs any longer. After a brief examination, Mya's pediatrician directed Krista and Sye to bring Mya to the nearest emergency room for additional bloodwork. They immediately left and went to a local hospital in Fort Worth where Krista received frightening news.

"At first they thought she may have cancer," Krista says. "Once they ruled out cancer, they told me that all signs were pointing to her liver as the source of the problem and that they were going to transfer to her Children's Medical Center Dallas in case she needed a liver transplant."

Mya was transferred to Children's Health the next day and admitted to the intensive care unit where a team of gastroenterological (GI) experts confirmed that Mya's liver was failing. She would need a liver transplant.

"It didn't seem possible," Krista says. "How did we go from a smiling, laughing baby at home to being in the ICU? It was really scary." 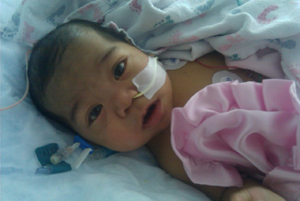 After several blood transfusions and initiation of other supportive medications, Mya's condition stabilized, but her liver was still failing. She was placed on the liver transplant list while her care team continued to monitor her progress. Mya was able to go home for about two weeks but returned to the hospital after Krista found blood in her stool. Just over a week later, Krista got the call that would change their family's life forever.

"We learned that not only was a full liver available, but it was a blood type match to Mya's," Krista says. "It really was our miracle."

The next day, Dev M. Desai, M.D., Ph.D., Chief of Pediatric Transplantation at Children's Health℠ and Professor of Surgery at UT Southwestern, led the surgery to transplant Mya's new liver.

"Liver transplantation is a difficult and stressful time for all families; however, it is even more difficult for families with children with acute liver failure, as they go from having a healthy child to one that is fighting for their life in a matter of days," says Dr. Desai. "Mya is thriving after transplant due to the fortitude and resilience of Krista and the entire family."

Krista says that although the surgery went smoothly, the emotions surrounding those few days can be hard to explain to others. 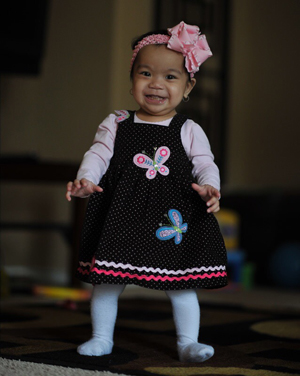 "As a parent, you are so relieved and happy knowing that they have found something that will help your daughter, but at the same time you are absolutely devastated for the other family, knowing they've lost something at the same time," Krista says. "You feel guilty for feeling joy, but you are not happy that someone has died; you are happy that someone has chosen to make the selfless decision to donate their loved one's organs to save your child's life."

Mya recovered from surgery over the next two weeks and was soon able to join her big brother, Jaden, at home – for good this time.

"During our stay at the hospital, the transplant coordinators educated us about how to care for Mya when we got home," Krista says. "At first, I was nervous to take her home because I was scared that I would not know what to do if anything happened, but the nurses and transplant coordinators reassured me that I knew what I was doing."

Mya thrives and her family gives back 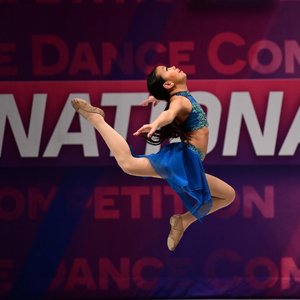 Under the close eye of her family and Dr. Desai, Mya continued to grow stronger each day. Her family, determined to honor the priceless gift given to Mya, soon registered as bone marrow donors and organ donors themselves and have encouraged their friends to do the same.

"This experience has touched our entire family," Krista says. "We are such advocates for organ donation, and even Mya's older brother has been affected. He wants to become a doctor so he can help families."

Mya is on medication to prevent her body from rejecting her donor liver – and will be for the rest of her life – but is now a thriving and active 10-year-old. Nothing is holding her back from doing what she loves – and that is never more evident than when she is on the dance floor.