Klara's bravery through cystic fibrosis makes her a real-life superhero

When Misti was pregnant with her daughter, Klara, her obstetrician noticed a cloudy spot on Klara's small intestine during a routine ultrasound. Misti's doctor informed her that there was a chance Klara would be born with cystic fibrosis (CF), an inherited genetic condition that affects mucus production in the lungs and digestive tract, and suggested that both Misti and her husband, Richard, undergo genetic screening. The test confirmed that both Misti and Richard were CF carriers, which meant there was a 25% chance that Klara would be born with the condition.

"We tried to learn all we could to prepare us for what to possibly expect, but we really just had to wait and see," Misti says.

Klara was born in January 2016, and a routine newborn screening test confirmed that Klara had CF. Just a few hours after delivery, she was admitted to the neonatal intensive care unit (NICU) at a local hospital because her stomach was distended and she was having difficulty eating. Doctors soon discovered that Klara had meconium ileus, an intestinal blockage that is very common in infants born with CF.

"Most people think of the pulmonary issues that are often associated with CF," Richard says. "But it actually affects all their organs that produce mucus, and for Klara, her issues have been related to her digestive tract more than any breathing issues."

A week after being discharged from the hospital, Klara had her first appointment at the Claude Prestidge Cystic Fibrosis Center at Children's Health. There, she met Preeti Sharma, M.D., Pediatric Pulmonologist and Associate Professor at UT Southwestern, and Meghana Sathe, M.D., Pediatric Gastroenterologist and Associate Professor at UT Southwestern, as well as a nutritionist, respiratory therapist and social worker who specialize in caring for children with cystic fibrosis. Together, the team assessed her condition and collaborated to develop a care plan for Klara moving forward.

"A multidisciplinary approach is essential to optimize the growth and development of CF patients with meconium ileus, especially in those requiring surgery in the first few months of life," Dr. Sathe says.

At home, Klara was started on twice daily breathing treatments and remained relatively healthy. She experienced two additional intestinal blockages but avoided any major breathing challenges often seen in patients with CF. When she was 3 months old, she had surgery to remove her ostomy bag. 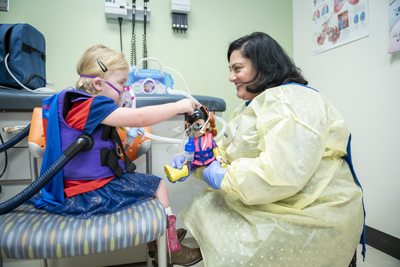 By the time she was 14 months old, Klara added daily high-frequency chest wall oscillation treatments wearing a vest that vibrates rapidly to help break up the mucus in her lungs. The treatments frightened Klara at first, so her parents used a stuffed animal to show her how it worked – but Klara, who has always loved superheroes, had other ideas.

"At first, we tried to ease her fears using a teddy bear that had a treatment mask on, but Klara said that her Bat Girl doll needed treatments instead," says Richard. "So Misti and her parents searched to find all the pieces to make Klara's doll a treatment vest as well."

"Now, Klara first hooks Bat Girl up for treatment and then sits down in her own chair and has her treatment as well," Richard says. "It's just a normal part of her day."

Today, Klara is an active 3-year-old who enjoys playing outside with her little brother and is always the first to start dancing when there's music playing. She just started preschool and is excited to start learning how to play softball as she gets older.

"We don't restrict Klara's activity and actually encourage her to do things that challenge her," Richard says. "We understand that her health issues may take her longer to recover if she does get sick, but we want her to feel as normal as possible and just enjoy being a kid."

Klara visits the Cystic Fibrosis Clinic every three months where Drs. Sharma and Sathe adjust her treatments as needed. For the past three years, she has had stable chest X-rays and no limitations on her activities, which reassures her family that they are doing everything they can to keep her healthy – and that Klara's bravery during her treatments is paying off.

"Klara and her parents, and all the CF patients and their families, are truly superheroes," Dr. Sharma says. "Their time, focus and determination are awe-inspiring for us and motivate our CF team to work harder to find newer and better therapies to treat all aspects of CF."