Graham was diagnosed with several congenital heart defects shortly after birth. When he was only 18 hours old, he was transferred from his home hospital in Louisiana to the Heart Center at Children’s Health℠. Five days later, he underwent what would be the first of several surgeries to repair his heart.

After spending the first six weeks of his life in the hospital, Graham was discharged and entered the Safe at Home program, allowing him to stay with his family locally in between visits. Over the next eight months, the family remained in Dallas while Graham underwent a handful of procedures to improve his heart’s condition before finally returning home to Louisiana. Though his mom, Misty, says she initially was saddened to learn they’d be extending their stay in Dallas, she’s so grateful for the resources and support the program provided them.

During Graham’s hospitalizations, he and his family met with several experts in the Heart Center, including Corinne Anton, Ph.D., an expert in the Cardiac Neurodevelopmental Program at Children’s Health. Graham had also been diagnosed with Mosaic Partial Trisomy 4, a rare chromosomal disorder, and studies have shown that children who have had cardiac surgery during infancy may experience developmental delays affecting their cognitive, language, and gross and fine motor abilities. Experts like Dr. Anton offer comprehensive developmental screening, evaluation, and follow-up to identify potential issues and empower families by connecting them with the resources they need to support their child’s development and growth.

“The first three years of life are critical for brain developmental and overall functioning,” Dr. Anton says. “Identifying developmental delays early will help our patients receive intervention services that can improve their developmental skills and quality of life.”

After a thorough assessment through non-invasive, playful activities, Dr. Anton recommended Graham continue his ongoing occupational and physical therapy and encouraged the family to pursue speech therapy when they returned to Louisiana because he continued to have feeding difficulties. Though Graham was obviously too young to be expected to speak, speech therapy can often help improve feeding skills in younger patients.

“We really wanted to participate in the assessment because of Graham’s early medical issues and genetic abnormality,” says Misty. “It was nice to see, on paper, where Graham was behind or ahead, and we were so impressed with the therapy services offered to Graham. Even as a newborn, Graham’s therapy included music, massage, physical therapy, occupational therapy and even the therapy dogs that would come visit.” 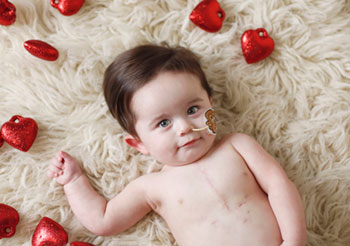 Misty says that as a nurse herself, the family was also motivated to participate in the program so the Heart Center could use his results and experience to help other families and patients in the future.

“I really believe in research and evidence-based practice, and I want to be able to help as many people as possible so future families that are in our position will have even more resources and information,” she says. “We’ve had such great interactions with Children’s Health and were continually impressed with the services and help provided every step of the way and would love to be a part of making it even better!”

Graham continues to get stronger every day, and he and his family meet any new challenge head on. Now 10 months old, he loves to play with blocks, balls or anything with lights and music, and he just started crawling! He also enjoys watching his two big brothers and swinging outside. He’s making great progress in therapy and continues to win hearts with his contagious smile and great personality. Misty says their journey hasn’t always been easy, she but is thankful for the support they received from Children’s Health.

The nationally renowned team of pediatric cardiologists and subspecialists at Children’s Health treat the whole spectrum of pediatric heart problems, with a commitment to excellence. Learn more about our treatments and services.