After being diagnosed with cystic fibrosis, Henry found expert care at Children's Health

Henry loves sports. He's an endless supply of sports trivia knowledge and you'll often find him playing his favorites: basketball and football. When you see him in action, it's hard to imagine that he has any health issues, but Henry's daily routine involves taking around 40 medications and three breathing treatments. As a baby, Henry was diagnosed with cystic fibrosis (CF) – but with his dynamic spirit and a supportive family and care team, he's never let the condition hold him back.

A family adapts to a surprising diagnosis 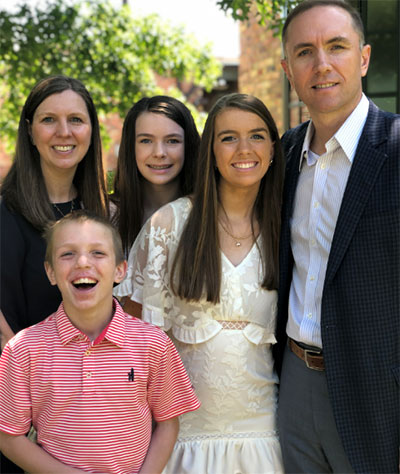 Already parents to two little girls, David and Anna were thrilled to welcome a son to the world in 2008. However, unlike his sisters, Henry had trouble putting on weight as a newborn and was diagnosed with failure to thrive.

Doctors met with David and Anna to give them a list of potential diseases that could explain their son's health challenges – and David and Anna quickly began researching. When reviewing the symptoms of CF, one symptom stood out: that when you kiss your baby, the baby tastes salty.

"It was kind of an ‘a-ha' moment, because that described Henry," remembers David. "He always had a salty crust to the skin. We thought he had the disease before he was even tested."

When Henry was 4 months old, doctors at Children's Health℠ confirmed he had CF, a genetic condition that affects mucus production and often leads to lung infections and breathing difficulties. While the diagnosis came as a surprise, since neither David, Anna or their daughters had the condition, it also came as a relief.

"At least with a diagnosis, we could take action," says Anna. "There is a defined protocol for CF, so we knew our next steps."

Henry began taking enzymes almost immediately, and soon began growing. His family learned as much as they could about managing the disease and started to adapt to their new normal.

"It was overwhelming at first, but we had focus on what we needed to do," says David. Henry started percussion therapy and breathing treatments, and continued to grow and thrive. In fact, he was so lively that treatments were a challenge for his parents.

"Even at that young age, he was an active boy," David says. "I remember trying to chase him around when he was little to give him percussion therapy."

As Henry grew older, he continued to be monitored by the team at the Claude Prestidge Cystic Fibrosis Center at Children's Health, including Michael Brown, M.D., and Preeti Sharma, M.D. While he had relatively few health complications early on, he recently faced some challenges that required hospitalization. 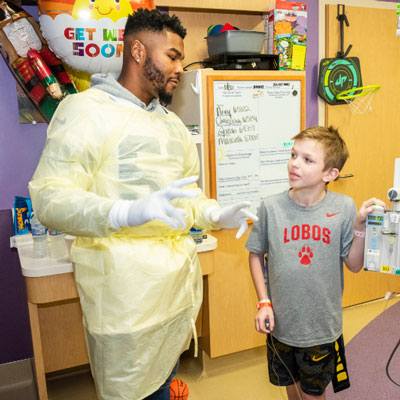 Being in the hospital can be difficult, but Henry and his family appreciate the team's efforts to make the experience as pleasant as possible. "Our experience at Children's Health has been wonderful," says David. "They really go out of their way."

Melissa Neely, a child life specialist, is one of Henry's favorites.

"She's one of Henry's best friends here," says David. "Even though they physically are still in the hospital, it's like she takes him out of the hospital for an hour a day by the way she lifts his spirits. It's very special."

Henry has also had the opportunity to meet some very special people at the hospital. In 2018, he was selected as the honorary captain for Notre Dame, when they came to Dallas to play in the Cotton Bowl. And when he was hospitalized during the holidays, basketball star Dirk Nowitzki, or "Uncle Dirk," stopped by for a visit. 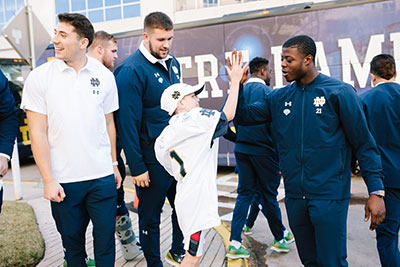 While they treasure these special moments for their son, David and Anna feel most grateful that their son has expert care so close to home – and that those experts have the best interest of their child at heart.

"Henry and his family are wonderful to work with – he is so sweet and full of energy," says Dr. Sharma. "Our CF team knows that our patients and families spend so much time on treatments and medications, and we work to individualize treatments to make sure that medical needs are met while taking into consideration things like school, family commitments and other activities. It's great to watch our patients grow and find their passion, like Henry with his sports activities."

Giving back in hopes of a better future

Looking toward the future, Henry's family has hope that research will progress and new treatments will become available for Henry. They've worked to support that vision by organizing an annual golf tournament in Henry's honor to raise money for the Cystic Fibrosis Foundation.

In the meantime, they enjoy spending time together – whether watching Henry play sports, traveling as a family or just navigating the day to day.

"With a disease that's chronic, and when you never know when you'll be back in the hospital, you have to be present as much as you can in every moment. We don't neglect the opportunities to share a positive moment," says David.

The Claude Prestidge Cystic Fibrosis Center at Children's Health manages the outpatient and inpatient care of infants, children and adolescents with cystic fibrosis. Learn more about our program and services.