Daniel lives life with purpose after a liver transplant

Grateful for a second chance at life, Daniel is determined to make the most of it

Daniel comes from a long line of athletes. His grandfather was a successful track and field athlete who represented Colombia at the national and international level. His mother was also a dedicated athlete who taught him the importance of making healthy choices and staying active from a young age. Throughout his childhood in Colombia, Daniel was surrounded by family members who supported his healthy lifestyle and pursuit to become one of the top BMX athletes in Colombia by the age of 13. 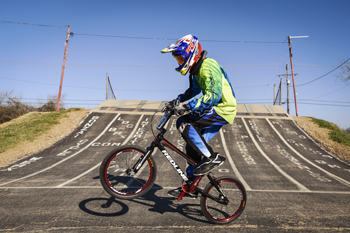 When Daniel's family moved to Texas in 2015, he continued his athletic career, competing in BMX races most weekends and training in the gym regularly – all while working hard in school.

But his hard work was brought to a sudden halt when he began to feel ill after a race one weekend in 2015.

"I thought maybe I was having an allergic reaction to something or was just getting sick," Daniel says. "I tried to rest at home after school and drink more fluids to see if that would help."

That evening, Daniel started to run a fever. His father brought him to the doctor who diagnosed him with bronchitis. The next day, Daniel woke up feeling even worse.

"I was sweating, shaky, dizzy, had a headache and my vision was blurry," he says. "But I was supposed to take my PSATs that day, so I told my mom I was still going to go to school."

Daniel finished the school day but began throwing up as soon as he got home. He remembers being in pain, falling asleep and waking up briefly to help his mom clean up around the house. The next thing he remembers is waking up in a hospital room at Children's Medical Center Dallas nearly two weeks later.

"My family tells me that over the next two days I started acting oddly and saying things that didn't make sense," Daniel says. "On Friday morning, my mom brought me to the local emergency room where tests showed there was a problem with my liver."

Initial blood and urine tests revealed high levels of ammonia, a toxin, which the liver normally removes from the system. Daniel would need highly specialized care, so he was transported to Children's Medical Center Dallas.

By Friday evening, doctors placed Daniel on continuous dialysis to try to reduce the ammonia levels and control brain swelling. They soon determined that Daniel would need a liver transplant.

"My mom started praying for a miracle," Daniel says. "That my liver would just heal itself instead."

Daniel was placed on the liver transplant list on Saturday night. By Sunday evening, his family received unexpected news: A donor liver was available. 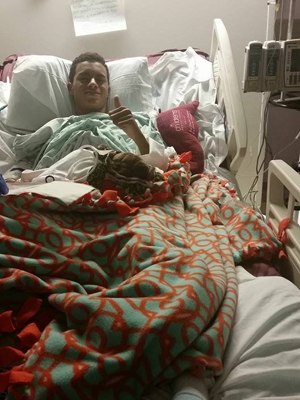 "I was the first patient in fifty years of the program to receive a transplant in just two days," Daniel says. "We realized that maybe that was the miracle my mom had been praying for."

On Monday evening, Dev M. Desai, M.D., Ph.D., Chief of Pediatric Transplantation at Children's Health℠ and Professor of Surgery at UT Southwestern, led a six-hour long surgery to transplant the new liver. Daniel remained in a coma for a few days after surgery as Dr. Desai and his team monitored the level of toxins in his blood and his brain to identify if he had sustained any long-term damage. Fortunately, Daniel's brain appeared protected, and just a few weeks later, he was able to return home.

"While we do not know what caused Daniel's acute liver failure, patients with this form of liver disease require rapid evaluation, stabilization and transplantation," explains Dr. Desai. "Daniel has had an uncomplicated recovery and has been able to return to the activities that he enjoyed prior to his transplant."

Over the next few years, Daniel was monitored closely by Dr. Desai to ensure there were no signs of rejection or complications from the liver transplant. Daniel continued to make healthy choices – staying active, eating healthy and drinking lots of water – and was even able to return to the sport he loved, BMX racing.

A life-saving act leads to a life-changing bond

For a while after his surgery, Daniel thought that Oct. 20, 2015 – the date of his liver transplant – would be the day his life was saved by a perfect stranger. But in September 2016, that all changed. Daniel, who had previously connected with his donor's family only through email, was invited to meet them face-to-face at a ceremony honoring their son. 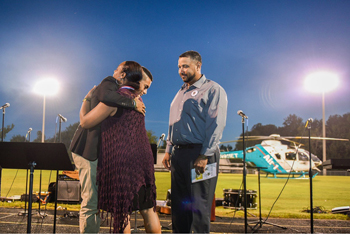 "He was a football player and honor roll student, and his high school was renaming their football stadium after him," Daniel says. "He donated organs that helped six other people."

Over time, Daniel learned more about the similarities between himself and his donor: They were around the same age and both enjoyed very active lives. He also grew closer with his donor's family.

"We talk on a regular basis, and I call them my second family," Daniel says. "We have a very special bond."

Focused on making the most of his second chance at life

Today, Daniel is 21 and is making the most of his second chance at life. 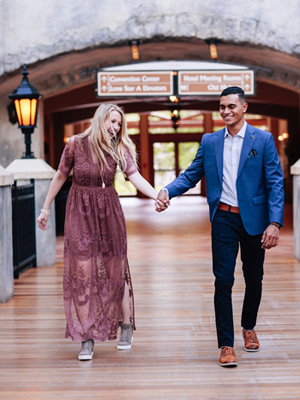 After enjoying two retreats as a camper at Camp SOAR, a weekend summer camp for teens who have had a solid organ transplant, he and some of his friends from camp will serve as counselors in upcoming sessions.

"I've met some of my closest friends through Camp SOAR, and now we're going to go back to be counselors," Daniel says. "We've lost some friends this year, which is hard, but it just gives us more motivation to be there for each other and for the campers. It's good to have those relationships at camp and people that can relate to you."

Another exciting celebration for the upcoming year: Daniel is engaged to be married! He also stays busy with work as a video editor and is currently working on a project about his experience to share the impact that organ donation can make in an individual's life.

"I know that I've been given a second chance," Daniel says. "And I will always use that chance to advocate for organ donation."

As one of the country's largest comprehensive pediatric transplant programs, we are dedicated to patient- and family-centered care that produces outcomes that exceed national standards. Learn more about Pediatric Transplant Program.