Quincy finds coordinated support for the effects of cystic fibrosis

When Sadie was pregnant with her daughter, Quincy, all signs pointed to a happy and healthy baby. So when Quincy's pediatrician informed her family that an abnormality had shown up on her newborn screening, it took everyone by surprise.

"I had a really great pregnancy," Sadie says. "Hearing her pediatrician talk about a potential issue just didn't seem real."

Quincy was quickly referred to a specialist in Oklahoma City, where her family was living at the time, who confirmed her pediatrician's suspicions: Quincy had cystic fibrosis (CF), a genetic condition affecting mucus production in her body that can lead to respiratory and digestive issues.

"Trying to get an already tired baby to take her enzymes before eating in the middle of the night was such a challenge," Sadie says.

Her parents also began daily manual chest percussion therapy involving steadily clapping on Quincy's chest and back in specific areas to help drain the mucus in her lungs. By the time Quincy was 8 months old, she started high-frequency chest wall oscillation treatments with the help of a vest that inflated and vibrated rapidly to keep her lungs clear.

A seamless transition to a new CF care team in Dallas

Around Quincy's first birthday, she and her family moved to Dallas and found care at the Claude Prestidge Cystic Fibrosis Center at Children's Health℠.

"We loved our team in Oklahoma City, but the transition to Children's Health was absolutely seamless," Sadie says. 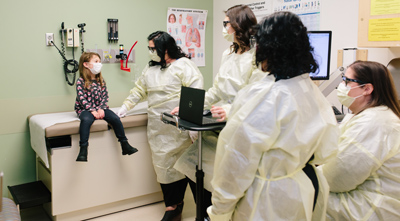 Quincy was evaluated by a multidisciplinary team of specialists including Preeti Sharma, M.D., Pediatric Pulmonologist at Children's Health and Associate Professor at UT Southwestern, and Meghana Sathe, M.D., Pediatric Gastroenterologist and Associate Professor at UT Southwestern. Working together with Sadie and Quincy's father, Cade, Drs. Sharma and Sathe developed a care plan to address Quincy's needs as she grew into toddlerhood, adjusting her enzyme supplements as she grew older and adding additional respiratory treatments as needed.

"The importance of coordinated and collaborative care in chronic multisystem illness cannot be understated," says Dr. Sharma. "It's good for patient outcomes and reduces caregiver burden."

A G-tube offers support and relief in Quincy's care

As time went on, Quincy struggled with gaining weight. Additionally, because of the unpleasant taste of one of her necessary medications, it was becoming difficult for Sadie and Cade to get Quincy to take her medicine without spitting it out, making it harder to proactively manage her CF.

Sadie, Cade, Dr. Sathe and a CF dietitian agreed that a gastronomy tube (G-tube) was necessary for Quincy to ensure she could receive the nutrients she need to promote her healthy development, especially in early childhood. 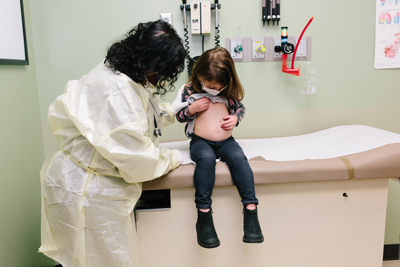 "It was an important collaborative decision made with Quincy's parents, myself, Dr. Sharma and our CF dietitians to put in a G-tube to help her gain weight," says Dr. Sathe. "Evidence has shown, over and over again, the importance nutrition plays in maintaining lung function and health or our CF patients. It also takes away the burden and fight of feeding your child."

In September 2019, Quincy had surgery to place the G-tube, and according to her mom, she adjusted to it right away.

"We were finally able to ensure she was getting the medicine she needed without any trouble, and I could stop stressing over whether she was eating enough calories during a meal because we knew we could supplement with the G-tube after," says Sadie. "It worked; she gained 12 pounds in a little over a year!" 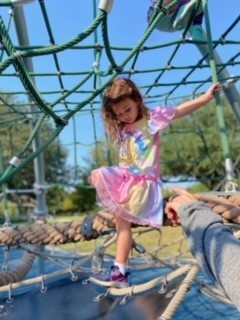 Quincy's days begin and end focused on managing her CF. Her twice daily routines are comprised of nebulizer, vest treatments and antibiotics to address her respiratory issues as well as daily enzymes, nutritional supplements and other medications to support her digestive system.

Still, her family is determined that her CF will not define her or her future.

"Early on we decided that this wouldn't become her identity," Sadie says. "Yes, we will do everything we need to do for her to remain healthy, but we view it as just part of our daily routine the same way we brush our teeth. We take the normal precautions that any parent would to keep their child safe, but I cannot think of a single thing we've ever held her back from because she has CF."

Today, Quincy is a spunky 4-year-old who enjoys music, dancing and, "has more personality than anyone I've ever met," according to Sadie. She goes to school three days a week, loves playing with friends and often surprises people when they learn of her condition. 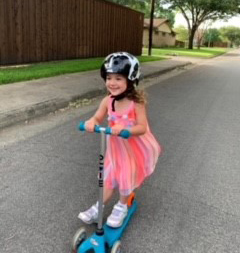 She remains closely monitored by her team at Children's Health and visits the CF clinic every three months where she is seen by all of her doctors in one place and at one time. Sadie says the coordination and communication among the team has been wonderful and shows that they are all working together to do what's best for Quincy.

"The doctors not only talk to each other, they also take into account what my husband and I see on a daily basis with Quincy's condition and that informs their decisions about her care," Sadie says. "I have always felt heard and listened to."

Quincy's family understands that the road ahead is uncertain, but they're confident that with the support of her doctors – and Quincy's feisty, never-give-up attitude – great things lie ahead for their little girl.