As she flips and flies through life, Ireland Kate manages CF with strength and support from Children's Health

When Ami was pregnant with her second child, Ireland Kate, she and her husband, Mark, assumed the experience would be similar to her first pregnancy with their son, Landry.

"Landry was, and still is, a healthy and happy boy, and I think we just expected that this pregnancy would be no different," Ami says.

But at the beginning of her second trimester, routine bloodwork revealed that Ami was a carrier for cystic fibrosis (CF), an inherited genetic condition that affects mucus production in the lungs and digestive tract. The news surprised her and Mark, who hadn't undergone any genetic testing during her prior pregnancy.

"My doctor was still very optimistic about everything and explained that Mark would have to be a carrier as well for there to even be a possibility that our child would be born with it," Ami says.

Mark was tested and learned that he, too, was a carrier, meaning there was a one in four chance that Ireland Kate would be born with CF. A few weeks later, an amniocentesis confirmed that Ireland Kate did have cystic fibrosis, and Ami and Mark were left with countless questions.

"By then, I was only 20 weeks along in my pregnancy, but we were already meeting with geneticists and experts to develop a plan for when she was born," Ami says. "At that point though, we had no idea whether she was even going to survive or what kind of life she would have if she did survive, but all we could do was just wait. We would not have gotten through that time if it weren't for our faith and the close tribe of friends, family and the community we had supporting us – including my mom, Ireland Kate's "Nonni," who continues to be involved in her care to this day." 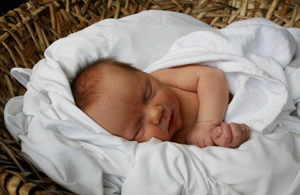 Ireland Kate was born in September 2009 in Detroit, Michigan, where the family then lived. Ami describes Ireland Kate as a beautiful baby with, "lots of black spiky hair and big blue eyes," but she also faced countless challenges for the first year of her life. She was at the hospital once or twice a week due to failure to thrive and relied on countless medications and treatments to manage her respiratory and digestive challenges.

Ami admits she worried a lot about Ireland Kate's prognosis a lot her first year, often letting the fear of the unknown overshadow the challenges she was overcoming on a daily basis. 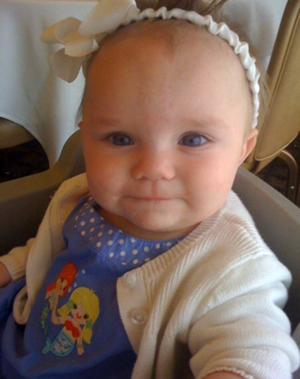 "Once I changed my mindset about everything and removed the ‘what ifs' and doubts from our vocabulary, she almost immediately started to do better," Ami says.

As Ireland Kate grew older, she continued regular nebulizer breathing treatments and high-frequency chest wall oscillation treatments wearing an inflatable vest that vibrates rapidly to help break up the mucus in her lungs. She also remained on several medications. She grew stronger each day, and by the time she turned 5, she was doing gymnastics. Ami says it was almost impossible for anyone to tell there was anything medically different about her.

"We determined then and there that cystic fibrosis wasn't going to define who our daughter was and that nothing was going to hold her back," Ami says.

It's an attitude that Ami and Mark maintained throughout Ireland Kate's early childhood years in Michigan and one they brought with them when they moved to North Texas in 2018. That is where they first met Preeti Sharma, M.D., Pediatric Pulmonologist and Co-Director of the Claude Prestidge Cystic Fibrosis Center at Children's Health℠ and Associate Professor of Pediatrics at UT Southwestern.

"Leaving Ireland Kate's care team in Michigan was one of the hardest parts of our move since they had been with us since before she was born," Ami says. "But from the very beginning Dr. Sharma and her team was completely on board with how we approached her care, and it just reassured us that we had made the right choice." 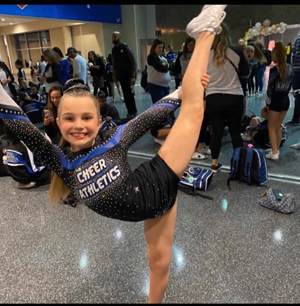 Ireland Kate maintained her treatment regimen under Dr. Sharma's care, and found support when she added a new passion to her life: competitive cheerleading.

"Ireland Kate started in a tumbling class when we moved to Texas, but the cheer coach quickly noticed her natural ability and asked her to join the team," Ami says. "Competitive cheer is such a demanding sport and challenges her lungs so much that it helps keep them clear."

Dr. Sharma closely monitors Ireland Kate's progress and lung function, which has remained very strong over the past two years. By partnering with the care team, she has stayed healthy, and streamlined her medication regimen to accommodate her busy, pre-teen schedule.

"Every child and family is different, and has different needs and goals," said Dr. Sharma. "Our CF Care team has this at the heart of our care – we strive to make sure that treatment plans are as individual as our patients, making sure that they can keep being the amazing kids they are."

Ireland Kate understands that CF will require lifelong management to stay healthy, but there is no question that with the support of her family and care team, she is more than ready to show the world exactly just how far she can go – and flip!