Carter is born ready to fight and defy the odds

When Kirsten was 24 weeks pregnant, a routine ultrasound revealed that her amniotic fluid was low and showed an abnormality in her baby, Carter's, kidneys. A few weeks later, a second in-depth ultrasound confirmed that Carter had polycystic kidney disease (PKD), a rare genetic disease that causes fluid-filled cysts to grow in the kidneys and can ultimately lead to kidney failure.

"In addition to his kidneys, doctors were concerned his lungs would struggle to develop because there was hardly any amniotic fluid at that point," Kirsten says.

Kirsten was referred to the FETAL Center at Children's Health℠, where she met with a team of UT Southwestern specialists, including a pediatric nephrologist, urologist and neonatologist, to discuss Carter's condition and future.

"At the time, it was hard to have high expectations for Carter based on similar cases," Kirsten says. "We planned for the best- and worst-case scenarios and everything in between."

"He was ready to fight for his journey"

Over the next several weeks, pediatric and neonatal specialists closely monitored Kirsten and Carter. Kirsten and her husband, James, continued to hold out hope that things would be okay.

"Every time I went in for an ultrasound, I just prayed that his kidneys would look better – but they never did," Kirsten says. "They did start to produce a little bit of urine, which was a good sign, but we still weren't sure what his outcome would be."

Carter was born in December 2019, at 33 weeks, weighing nearly 7 pounds. For Kirsten, hearing his first cry was music to her ears.

"The best thing was that he cried when they delivered him," she says. "For so long, we weren't sure how his lungs would be, so I just felt like that was his way to tell us that he was ready to fight for his journey."

Carter was admitted to the neonatal intensive care unit (NICU) at the hospital where Kirsten delivered, and he was soon intubated and put on a ventilator to help him breathe. The next day, he was transported to the Level IV NICU at Children's Health, which is nationally ranked among the nation's top 20 programs in neonatology and equipped to provide the highest level of care to infants.

In the NICU, doctors and nurses battled the many challenges presented by Carter's poorly developed lungs and failing kidneys. A multidisciplinary team of specialists worked around the clock as his abdomen became increasingly swollen with fluid. At just 10 days old, he had his first surgery to place a catheter to help drain the fluid. He began low-level dialysis just three days later.

"Dialysis is a complicated procedure that allows the removal of waste products from the body when the kidneys are not working," explains Jyothsna Gattineni, M.D., Chief of the Children's Health Nephrology Division and Associate Professor at UT Southwestern. "It is even more delicate when used in premature infants. The renal and neonatal teams collaborated to optimize care so that Carter could grow and thrive."

A bilateral nephrectomy marks a turning point for Carter 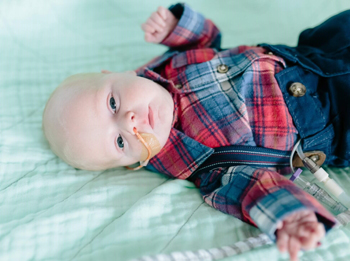 Two weeks later, Joseph Murphy, M.D., Pediatric Surgeon at Children's Health and Associate Professor at UT Southwestern, performed a bilateral nephrectomy, removing both of Carter's kidneys. By that time, they had grown to the size of adult kidneys. Kirsten says the surgery was a turning point in Carter's journey.

"Once his kidneys were removed, things seemed to turn around for Carter," she says.

Three days later, the day after Christmas, Carter's breathing tube was removed and Kirsten received the best present she could have asked for: "I got to hold Carter for the first time," she says.

Carter began taking a bottle and slowly graduated from his newborn incubator to a crib.

However, the NICU team soon discovered a build-up of fatty lymphatic fluid in Carter's abdominal cavity stemming from a rare condition known as chylous ascites (CA). Carter was moved to a formula to try to correct the issue, but it persisted over the next several weeks. Still, Carter continued to get stronger each day and eventually outgrew the need for any additional oxygen support. 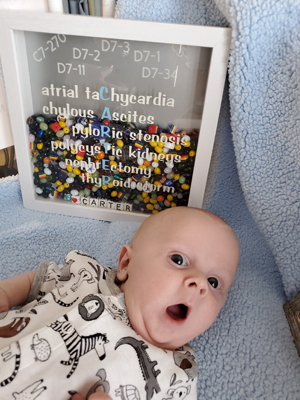 Shortly before Carter turned 3 months old, he began losing weight and getting violently sick after eating. An ultrasound of his abdomen revealed that the muscle that allows food to pass from his stomach into his small intestine had thickened, causing an obstruction in his stomach. The condition, known as pyloric stenosis, prevents food from being digested past the stomach and can lead to serious complications.

"The coordinated care required to manage all the difficulties of what Carter had to face can only be handled appropriately at a Level IV NICU," says Rashmin Savani, M.D., Chief of the Division of Neonatal-Perinatal Medicine at UT Southwestern and Children's Health and Professor at UT Southwestern. "The coordination between specialists and subspecialists has to be exact and nimble, responding to every complication to ensure that his condition improved. Children's Health and UT Southwestern provide that comprehensive system of support."

Dr. Murphy performed a pyloromyotomy, a laparoscopic surgery to re-open the pyloric muscle to allow food to move into his small intestine.

"Since his surgery, he has been taking his feeds really well and has been doing great," Kirsten says.

After four months, Carter joins his family at home 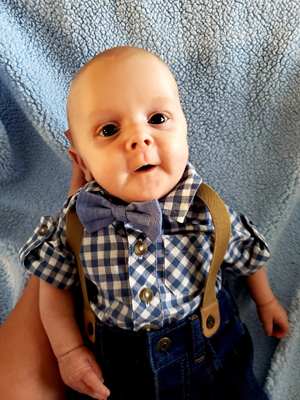 In April 2020, more than four months after Carter was born, he was able to join his proud big sister, Ellie, and parents at home. He will be closely monitored by the Children's Health Nephrology team and continue daily dialysis treatments at home until he is eligible for a kidney transplant – a milestone most patients reach around their second or third birthday. Until then, Kirsten and James are grateful for the tremendous progress Carter has already made and will never forget the support they received from their NICU family, including several nurses like Adam Welch, BSN, RN.

"For those of us on Carter's care team, it was important that his parents knew they could count on us to care for him at the highest level, especially when they couldn't be there in person because they were caring for their other daughter at home," Welch says. "Because we got to know him so well, we were able to recognize when he wasn't acting like himself and were able to intervene on his behalf when needed. To me, giving his parents that peace of mind that their child is in good hands is so rewarding."

Knowing that Carter has already overcome many challenges at such a young age, that NICU family will be there to cheer him on as he continues to make monumental progress.

"Carter had such a large support group and knew and felt secure with each and every one on his care team," says Kirsten. "The doctors, nurses and respiratory therapists were all so invested in Carter's care, and they treated him like he was one of their own kids. It gave me such peace knowing that he was in their hands when I couldn't be right there."

The Neonatal-Perinatal Medicine experts from UT Southwestern practicing at Children's Health, alongside a highly specialized team of nurse practitioners, therapists, case workers, social workers, chaplains and child life specialists, provide comprehensive care for a wide variety of neonatal conditions and are dedicated to improving outcomes for the tiniest of patients. Learn more about our top-ranking Neonatal-Perinatal Medicine Division.