Brothers Bentley and Brody enjoy catching bugs, fishing and playing together outside. Bentley is about to start his third season of soccer, and Brody can't help but start dancing any time he hears music. As their mom, Dori, puts it, "They are two healthy boys who just happen to be deaf."

Thanks to the collaborative, comprehensive care they've received at the UT Pediatric Cochlear Implant Program at Children's Health℠, Bentley and Brody are thriving and continue to keep their parents on their toes.

A family receives a life-changing diagnosis

Around Bentley's first birthday, his parents noticed that he had stopped talking, which raised a flag for his pediatrician at his 1-year appointment. Together, they decided to wait and see if his language delay improved by his 15-month appointment, at which time they could do a hearing test to try to rule out any major issues.

"Going into his next appointment, my husband, Britton, and I were pretty sure Bentley was deaf," Dori says. "We had already tried banging on pots and pans and clapping while he was sleeping in his crib, and he didn't react."

After Bentley did not pass three hearing screens, Bentley's audiologist suggested he undergo an Auditory Brainstem Response (ABR) test to determine the extent of his hearing loss. Because resources were limited in the family's hometown of Midland, Texas, Dori reached out to Children's Health for answers.

Bentley and his family made the first of what would be many trips to Dallas for the ABR test and for surgery to place tubes in Bentley's ears – a procedure his parents hoped would help improve his hearing. Unfortunately, they didn't receive the news they were hoping for after surgery.

"That was probably the hardest day of this entire process," Dori says. "When the doctor told us that Bentley had profound hearing loss in both ears, we were completely shocked." 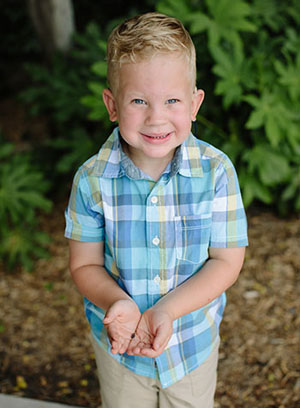 Dori and Britton decided to explore the possibility of cochlear implants for Bentley, and they soon met with Walter Kutz, M.D., Otologist at Children's Health and Professor at UT Southwestern, to determine if he was a candidate.

Bentley underwent a number of tests, including additional hearing tests, a MRI and genetic testing to help identify the cause of his hearing loss and determine if cochlear implants would be an effective option. In the meantime, Bentley also began learning sign language and his parents started using flashcards to help him express himself.

"Once he was able to communicate even simple things, he was a much happier child, and we felt like we wanted to give him every opportunity possible," Dori says. "And if, when he got older, he wanted to be deaf and not wear his implants, we would totally be okay with that."

Bentley's family learned that the cause of his hearing loss was genetic – news that brought answers for Bentley's case but unknowns for his younger brother, Brody, with whom Dori was pregnant at the time.

Dr. Kutz soon performed bilateral cochlear implants on Bentley. He recovered quickly from surgery and was discharged the next day to stay at the Ronald McDonald House of Dallas for a few days before returning home to Midland.

"Kids are so resilient," Dori says. "It was a fight to keep the bandages on right after surgery, but by the next day, he was in the playroom acting like nothing had happened!"

Two weeks later, Bentley and his family returned to Dallas to have his implants activated. Though adjusting to his new "superhero ears" – as he now calls them – was difficult, he grew more familiar with them over time. Bentley continued specialized speech therapy and auditory verbal therapy (AVT) back home in Midland while he and his family prepared for the arrival of his new baby brother.

Brody follows in his brother's footsteps 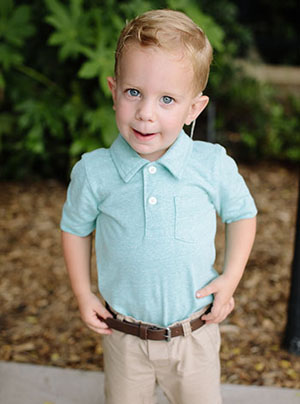 In January 2017, Brody was born. Even though there was a 25% chance of Brody being deaf, his parents were still surprised when he didn't pass his newborn hearing test.

"Since Bentley's was a progressive loss, I assumed Brody would gradually lose his hearing later like his older brother," says Dori. "I called Children's Health right away."

At Brody's first appointment, Dr. Kutz confirmed he was also a candidate for cochlear implants. He began speech therapy by the time he was 2 months old, and in January 2018, twelve days after his first birthday, Dr. Kutz performed bilateral cochlear implants on Brody. He recovered from surgery just as well as his big brother, and a month later, Brody's implants were activated.

Now, a year later, both boys are doing great. They use both spoken and sign language throughout the day and continue to be closely monitored by Dr. Kutz and Rachel St. John, M.D., Director of the Family-Focused Center for Deaf and Hard of Hearing Children at Children's Health and Associate Professor at UT Southwestern. 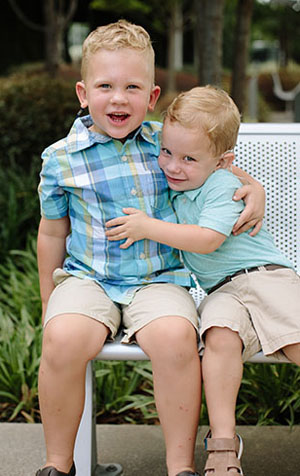 "Dr. St. John has been an all-around support person that I can contact anytime if I have concerns or need help finding resources in our area," says Dori. "When we were deciding whether or not the boys should learn sign language or just focus on speech alone, she reminded us that there is nothing wrong with a child being bilingual! She helped us feel more at ease with our decisions, and it has made such a big difference."

Dori, who would often cry when thinking about at all the toys that made sounds her sons couldn't hear, now sheds happy tears as she hears Bentley and Brody singing along and talking to one another.

"It has been a long and, at times, scary journey up until now, but we are finally seeing them catch up to their peers and thriving," Dori says. "We just want them to be confident in who they are and know that God has big plans for them."

The UT Pediatric Cochlear Implant Program at Children's Health brings together experts from Children's Health, the University of Texas at Dallas (UTD) Callier Center for Communication Disorders and UT Southwestern Medical Center to provide the best in cochlear implantation for children. Learn more about our program and services.

Family-Focused Center (FFC) for Deaf and Hard of Hearing Children

The Children's Health Family-Focused Center (FFC) for Deaf and Hard of Hearing Children works with you, your family and your child's physician to provide support, education and access to community resources to support your child who is deaf or hard of hearing.