Once afraid to feed their child, Esther's family is now confidently managing her FPIES diagnosis with support from the Food Allergy Center at Children's Health

Esther is a feisty, happy toddler who looks up to her 7-year-old twin sisters, spends her days pretending to be a sheriff from one of her favorite TV shows and enjoys searching for worms after springtime storms.

She was born in August 2016, and was a happy and healthy baby. She was exclusively breastfed for six months and grew and developed as expected. But when her parents began introducing solid foods to her diet, she started experiencing constipation and blood in her stools. 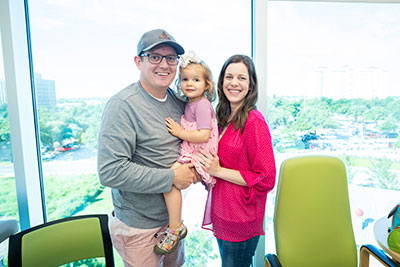 "Esther's pediatrician thought maybe her body wasn't ready to process the grains yet and suggested we wait until her stools get back to normal before we tried again," says Esther's mom, Heather.

After a few weeks, Esther tried oatmeal again, but this time, her reaction was much more severe.

"Two hours after eating the oatmeal, Esther was very pale, began violently throwing up and was having trouble holding her head up," Heather says.

Heather, a pediatric nurse, knew something was wrong, so she brought Esther to the emergency room in their hometown of Oklahoma City. Doctors gave her fluids and medication to stop the vomiting, but ultimately thought it was just a stomach bug and sent her home.

A few days later, Esther had a similar reaction to wheat and/or green beans, which required another visit to the emergency room. After a week of recovering on breast milk only, Heather decided to try giving Esther solid food again. A few small bites of oatmeal sent Esther into shock.

Heather began researching Esther's symptoms and was convinced she had a condition called food protein-induced enterocolitis syndrome (FPIES). The problem was that neither the emergency room doctors, nor her pediatrician, had ever heard of it before.

The family was referred to a local pediatric gastroenterologist who confirmed Heather's suspicions, but because FPIES is so rare, he did not have a lot of experience treating patients with the condition. Determined to find the best care possible for her child, Heather began searching for an FPIES expert.

"This was a life-altering diagnosis, and we were overwhelmed, scared and sad for our sweet baby," Heather says. "We knew we needed an expert." 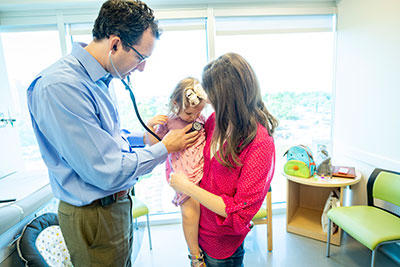 After more research, Heather learned of J. Andrew Bird, M.D., Director of the Food Allergy Center at Children's Health℠ and Associate Professor at UT Southwestern, who has extensive experience treating patients with FPIES. In May 2017, Esther had her first appointment with Dr. Bird, and immediately, her parents felt relieved that they had made the right choice.

"We felt so lost by something as simple as being afraid to feed our child, and it seemed like no one had experience with it," says Heather. "So when we met Dr. Bird, it was truly a life-changing appointment and an answer to prayer."

"They have supported us each step of the way"

Over the next two years, Dr. Bird worked with Esther's family to safely – and slowly – introduce new foods into her diet. For some higher-risk allergens, Esther and her family travel to the Food Allergy Center in Dallas, where a medical team is available to respond if she has a reaction. 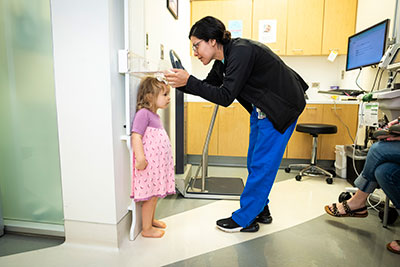 "It really is incredible," says Heather. "There is an entire team that understands FPIES and can respond immediately if she shows signs of a reaction, and they have supported us each step of the way these past two years."

At almost 3 years old, Esther currently has 35 "safe" foods and seven known allergens. Much to her parents' and doctors' delight, she hasn't experienced any food aversions that many children with food allergies must often overcome. In fact, to those who aren't aware of her medical history, there is little to no evidence of the challenges she faces on a daily basis.

"Esther eats the healthiest diet out of our entire family," says Heather. "She is such a happy and healthy little girl."

Her parents hope that she will one day outgrow her allergies, but until then, they know she's in good hands with Dr. Bird and his team.

The Food Allergy Center at Children's Health is the only academic-affiliated pediatric food allergy center in North Texas. We offer comprehensive testing, diagnosis and management for food allergies and access to groundbreaking research and clinical trials aimed to develop new therapies for children with food allergies. Learn more about the Food Allergy program and services.

Allergy and Immunology services at Children's Health can help your child cope with conditions such as nasal and sinus problems, allergies, and infections due to sinus disease, as well as deficiencies in your child's immune system.