After unexplained leg pain knocked him down, experts at Children's Health helped Isaiah get back on his feet

Isaiah is a very active child who enjoys riding his bike, playing outside and reading adventure books. So when the 9-year-old complained that his leg was hurting one Sunday evening, his mom, Kristi – a nurse – didn't think much of it.

"My boys fall all the time running around," Kristi says. "I just assumed he had hurt it playing and didn't realize it until later."

The next morning, Isaiah was in so much pain he couldn't walk or go to school so Kristi took him to the local urgent care in their East Texas town. Though his ankle was slightly swollen, an X-ray revealed there were no broken bones. Doctors put him in a soft brace and told Isaiah to come back if it didn't get better in a few days.

Isaiah went back to school the next day, but by mid-morning, the school nurse called Kristi. Isaiah was in her office complaining that his ankle was hurting so badly he couldn't sit still in class. Kristi brought him home to rest, but Isaiah soon developed a fever, causing Kristi to suspect there may be something more serious going on.

The two traveled to the closest emergency room where Isaiah tested negative for the flu and strep. Doctors suspected that he had probably developed an upper respiratory infection that would be gone in a few days. Kristi wasn't satisfied.

"I asked them to do an MRI, but they informed me they didn't have the capabilities at that location," she says. "When I asked to speak to an on-call pediatrician, they told me there was no need; they gave him a new splint and sent us home."

A mom's persistence pays off

By Thursday morning, Isaiah was in so much pain, Kristi knew he needed help. That's when she called the Children's Health℠ Andrews Institute for Orthopaedics & Sports Medicine. The team was able to see him that same day.

"When the woman answering the phone heard Isaiah in pain in the background, she found a way to squeeze him in," Kristi says.

Kristi and Isaiah drove two and a half hours to Children's Health Andrews Institute where they were greeted at the entrance with a wagon for Isaiah to ride in since he still couldn't walk. He was brought back to the exam room right away.

"We first saw Linda Grande, a pediatric nurse practitioner, who asked to see Isaiah's X-rays," says Kristi. "As soon as she looked at the images, she suspected she knew exactly what was wrong."

Isaiah was diagnosed with osteomyelitis, a bone infection, in his ankle that would require surgery. For Kristi, it was a relief to finally have an answer.

"I was scared but felt relieved because something was finally being done to help my son," she says. "I knew that the prognosis is great if it can be caught early, and I was confident Isaiah would be okay."

Quick action leads to a full recovery from osteomyelitis

Isaiah was prepped for surgery to remove the infected portion of his bone. The surgery was successful, and in less than a week, Isaiah was ready to return home. 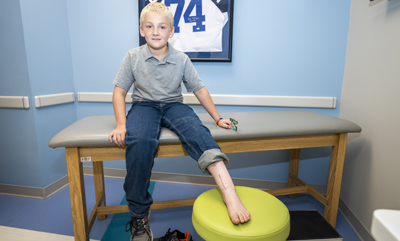 For the next six weeks, Isaiah was unable to put weight on his foot and used a walker and wheelchair to get around at home and at school. As he grew stronger, he was eventually cleared to move to a walking boot and immediately made up for lost time.

"I think he's already on his second boot and probably ready for a third as he's worn this one out already," says Kristi.

Isaiah continues to be monitored to make sure no residual infection remains in his bones, but all signs point to a full recovery.

For Kristi, there's no question her son got the care he needed at the right time to prevent any serious, long-lasting effects.

"The care Isaiah received at Children's Health Andrews Institute has been absolutely amazing," she says. "We know it could have been a lot worse, and we're just so grateful."

The only pediatric institute of its kind in the region, the Children's Health Andrews Institute for Orthopaedics & Sports Medicine provides convenient access to a full continuum of orthopedic and sports medicine care. Learn more about our orthopedic services.