When their oldest daughter, Bryce, was about 14 months old, Jamie and Destin were thrilled to discover that Jamie was once again pregnant. "We wanted our children to grow up close to one another," Jamie says. "That was our hope and dream, that we get to have a family life."

Unfortunately, at Jamie's 18-week ultrasound, the family learned there was a problem. "We'd gone into the scan expecting to find out if we were having a boy or a girl. Instead, we found out they couldn't find all four chambers of our baby's heart," Jamie says.

Doctors diagnosed the couple's unborn daughter with pulmonary atresia with intact ventricular septum (PAIVS), a rare congenital abnormality. Jamie and Destin weren't sure if their daughter would make it to birth.

But they persevered, and baby Sanders was born March 7, at 38 weeks gestation. A catheterization procedure revealed that Sanders had RV-dependent coronary disease and was not a candidate for surgery to fix the structural issues in her heart. At that point, her only remaining option was a heart transplant.

Sanders' transplant journey brought her to Children's Health℠, the only health system in the area performing pediatric heart transplants. She was admitted to the ICU, and while she awaited a new heart, her health continued to decline. 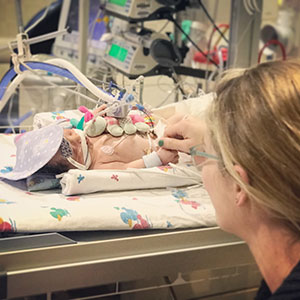 "We weren't even thinking about the new heart yet," Jamie says. "We were just thinking survive."

Fortunately, the family had an extensive support system – including a dedicated care team at the hospital.

Joscyln Patrick, APRN, a nurse practitioner in the Children's Health Cardiac Neurodevelopmental Program, became a special advocate for the family in the ICU. With her support, Jamie and Destin began not only to hope for a new heart for their daughter, but also to dream about the type of life they wanted for their daughter after transplant. Children with congenital heart conditions are often at higher risk for developmental delays, and Jamie and Destin wanted to do everything they could to ensure Sanders had the best quality of life possible.

"Early intervention does not have to wait until home or when a child is discharged from the hospital. It can start as soon as a child arrives in their hospital room," says Corinne Anton, Ph.D., ABPP, Director of the Cardiac Neurodevelopmental Program at Children's Health and Assistant Professor at UT Southwestern. "The Cardiac Neurodevelopment team assists in educating families on the importance of developmental care, supporting and facilitating parents' interactions with their child and providing parents with opportunities to care for their child as they would at home in their nursery."

With the support of Joscyln and the Cardiac Neurodevelopmental team, Jamie and Destin identified ways to complement Sanders' medical care with activities that supported her developmental needs as well. They read to Sanders all the time and transformed her hospital room to feel more like a typical nursery to help make her future transition to home as smooth as possible. 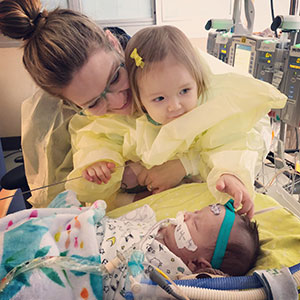 "We began playing quiet stories constantly in her room so she would hear everyday language instead of medical talk all day long," Jamie says. "Sanders also began music therapy thanks to the recommendation of the neurodevelopmental team."

Sanders' family also took deliberate steps to support her emotional and relational development, even from her earliest moments in the hospital.

"One of the things we learned was that newborns with heart issues often don't like to be snuggled because so much of their time spent being held in the hospital is for needles or medical procedures," Jamie explains. "We wanted to see if it was possible for her to like human touch and be comforted by being held."

Jamie and Destin made it a priority to hold Sanders as much as possible, despite the complexities of moving a baby connected to wires and machines. The hard work paid off: Sanders didn't just tolerate being held, her vitals typically remained the most stable during skin-to-skin time.

"It was a lot of work, but the team knew it was a priority for us, and they were committed to making it work," Jamie says. 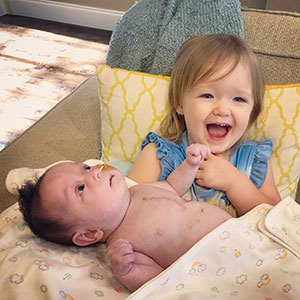 Six weeks after arriving at Children's Health, Jamie and Destin received word that a heart was available. Sanders' transplant surgery began at 4 a.m. on April 27. By 7 a.m., her new heart was beating in her chest, and by noon, she was back in her room with her parents.

"All the nurses were talking about how pink she would be," Jamie says. "She had color and she looked alive! It's amazing what it does to have a good heart in you."

While Sanders experienced some ups and downs in recovery, her new heart allowed her to survive the things she went through. On May 24, just less than one month after her transplant surgery, Jamie and Destin were able to take Sanders home.

Sanders scores off the charts 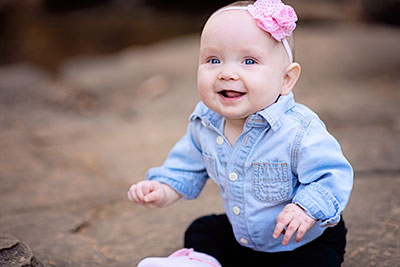 Sanders' parents and care team remained committed to supporting her development after her heart transplant. They focused on physical, occupational and speech therapy to prepare Sanders for any challenges she might face as she grew older.

"There were so many people focused on keeping Sanders alive in the hospital, but the support of the Cardiac Neurodevelopmental team helped us focus on her quality of life once she came home," Jamie says.

By the time she turned 2, Sanders was thriving. Other than her "pretty scars," as she calls them, no one would be able to guess how much she went through at such a young age. 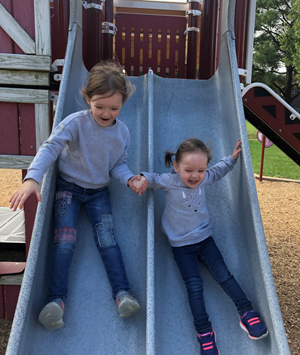 In March 2020, Sanders had her first evaluation with Dr. Anton to identify any potential developmental delays and determine what support she might need in early childhood. Instead, Sanders scored off the charts, displaying advanced abilities for her age that astonished even her parents.

"Hearing Dr. Anton say that Sanders will most likely excel in school was simply incredible," Jamie says. "We attribute her success to the interventions supported by the Cardiac Neurodevelopmental team early on in her care, which gave her every chance possible to thrive – medically and neurologically."

Today, Sanders is an active 2-year-old who is "the cuddliest little human you've ever met," according to Jamie. She loves singing, books and playing pretend. She will continue to be evaluated by Dr. Anton to track her progress. Until then she'll be focusing on meeting her next big milestone – graduating to "big sister" to a new baby brother on the way.

The Children's Health Cardiac Neurodevelopmental Program provides experts who specialize in identifying and treating babies and children with congenital heart conditions, who are most at risk for developmental differences. Learn more about the comprehensive care offered at The Heart Center.