A breath of fresh care for Matthew and his family

From a timely diagnosis to lifesaving care, Children's Health helps Matthew with a rare diaphragmatic hernia.

Planes, trains and automobiles are just a few of Matthew's interests. He spends his days playing outside with his older brother, and his parents describe him as a happy child. You'd never know he fought courageously for his life – before he was even born.

At 34 weeks pregnant, Matthew's mom, Molly, went in for a routine prenatal checkup, only to discover Matthew had a congenital diaphragmatic hernia (CDH). The news completely changed all of Molly and John's delivery and post-delivery plans.

Impacting only about 1,600 babies born every year in the U.S., CDH occurs when a baby's diaphragm – the muscle that separates the chest from the abdomen – fails to close during prenatal development. This caused Matthew's abdominal organs to drift into his chest through the opening, crowding his lungs and inhibiting growth.

"We had one month to go before delivery. We had a plan, and now that plan was in the garbage," John says.

"In collaboration with our delivery hospitals, we are able to provide the highest level of care to infants from birth through discharge," explains Sushmita Yallapragada, M.D., Medical Director of the FETAL Center and Assistant Professor at UT Southwestern. "We believe a multidisciplinary approach is the best way to take care of this vulnerable population. This allows us to put together a highly trained, specialized team that is ready to take care of the infant."

Not a moment to spare 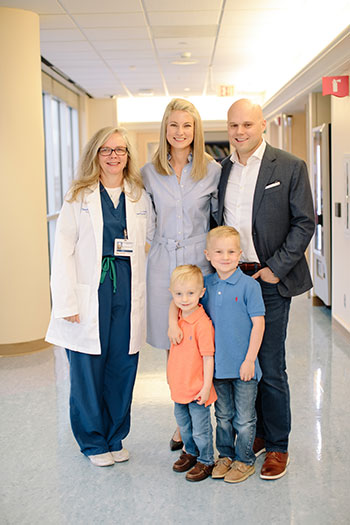 A few days later, Molly and John visited the FETAL Center at Children's Medical Center Dallas, the flagship hospital of Children's Health. There, they discussed coordination for Matthew's delivery and care after birth, and they toured the Level IV Neonatal Intensive Care Unit (NICU), the highest level of neonatal care as designated by the Texas Department of State Health Services.

The team worked alongside Molly and John to develop a tailored care plan for Matthew to start the moment he arrived.

"That's one of the beauties of the program – before the baby is here and the intense stress starts, we provide as much information, planning and support as possible while also building trust," Dr. Wyckoff says.

One of the most critical parts of the plan was helping Matthew take his first breaths. With Matthew's lungs not fully developed, he could have trouble getting enough oxygen in and carbon dioxide out. That's why babies with CDH require an all-hands-on-deck approach during the first hours of life – to help these babies breathe without damaging their fragile lungs.

All hands on deck

The day came, Matthew was born and the specialized resuscitation team helped him take his first breaths safely by immediately inserting a breathing tube into his air pipe.

"It felt good to be prepared for the experience and know what to expect," Molly says. "It happened just like they said it would – and it worked."

Once Matthew was stabilized, he was transferred to Children's Medical Center Dallas for operative repair.

A part of the family

Two surgeries to repair his diaphragm and 27 days later, Matthew was weaned off the breathing tube, learned to eat and was ready to head home. This day had never been guaranteed, yet their day of joy became bittersweet as it was also a day of goodbyes.

Throughout Matthew's journey, Molly and John had faith in Matthew's care team – what they didn't expect was to build such deep relationships along the way.

"What surprised us was the people that we got to meet and know. They became part of our family, and they still are," John says. "That has been life changing."

Molly and John found Children's Health to be the best option not only for Matthew, but also for them.

"We got the support we needed, and it kept us going," Molly says. "The people here really helped us understand how we were going to get through this."

"The best way I can sum it up is like forgetting you had a fantasy draft, and you're a couple weeks into the season," John says. "You meet your new team that auto-drafted – and, by the way, you got your dream team."

Growing, thriving and fulfilling a dream 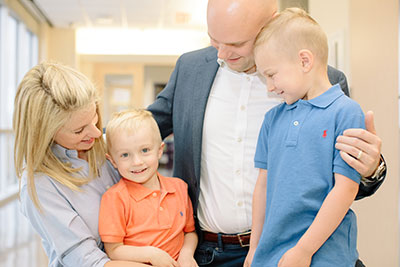 Today, Matthew maintains his fighting spirit as a fun-loving, happy and healthy child – and his parents are grateful to see him grow.

"When you have a child, you daydream about all of the things they could be. I'm thankful that I still get to have all those daydreams for Matthew," John says. "I don't know what he will be, but I'm confident Matthew will figure that out, and when he does, good luck stopping him."

Dr. Wyckoff agrees, adding, "Matthew is already fulfilling a dream – he's running around and doesn't seem to have difficulties doing anything, including breathing. He's smart as a whip. He's an integral part of a beautiful family. I have no doubt he's going to continue developing and hopefully do something amazing for this world."

The FETAL Center at Children’s Health is home to world-class experts who help expectant parents and their babies overcome even the most complex prenatal health issues.