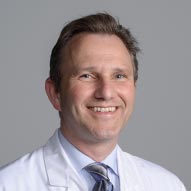 The effects of war made Dr. Gerald Greil want to help others. Although he was born two decades after World War II, the fallout in his native country of Germany shook him: His grandmother and uncle died and his grandfather was seriously wounded in the war.

“I have been constantly aware of the urgent need for social and medical support as well as health care since I was a child,” he says.

Military service was compulsory in Germany during the Cold War era. So when he finished school, Dr. Greil was assigned to the medical service. There, he felt the potential to do something to help others and he decided to study medicine.

During his college years, he developed an interest in anatomy and pathology. He also especially enjoyed working his hospital rotations in the pediatrics departments. That led him to make a commitment to pediatrics with a focus on pediatric cardiology.

“There’s the big effect of seeing someone go from being very sick to having a very good life expectancy,” says Dr. Greil, now chief of cardiology at Children's Health℠ and a professor of pediatrics and radiology at UT Southwestern Medical Center.

There’s the big effect of seeing someone go from being very sick to having a very good life expectancy.

But Dr. Greil didn’t forget about his interest in anatomy. Early in 2015, he became internationally recognized when a 2-year-old’s life was saved by an innovative approach he developed. He created a 3-D replica of a heart from the child’s MRI. Because doctors could study a 3-D version, they were able to come up with a plan for a complex procedure to correct a hole in the child’s heart.

The idea for 3-D anatomy replicas came to him years before, when he was studying congenital heart disease in the pathology laboratory at Harvard Medical School. He thought about how to create a device that could teach about complex congenital heart disease and help make surgeons more confident in planning complicated surgeries. The inspiration for the solution came from an unlikely connection.

“I had a good friend who worked in the car industry and they used 3-D replicas to build prototypes,” he says. “Even though those replicas were for machines, I thought it wouldn’t be that different to replicate a body part that had something like a complex heart defect.”

Dr. Greil is enthused by the prospects of the 3-D technology. It’s already been used for implants and by plastic surgeons to help reconstruct the faces of patients. However, he’s equally proud of the long-term relationships he’s built with patients and their families.

“They send you Christmas cards, the kids draw you something, they show you that they appreciate that you took care of them,” he says. “They are really precious gifts and I keep them to be reminded of the influence my teams and myself had on them.”

When Dr. Greil is not working, he likes spending time with his family, traveling, and participating in outdoor sports including skiing, tennis and windsurfing. He enjoys going to arts events in the Dallas area, including classical music concerts, opera and the Dallas Museum of Art.