What is Xeroderma Pigmentosum (XP)? 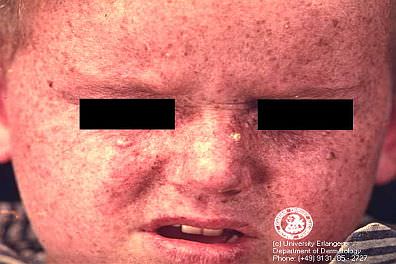 Xeroderma pigmentosum, or XP, is a very rare inherited disease that causes extreme sensitivity to the sun's ultraviolet rays. Unless patients with XP are protected from sunlight, their skin and eyes may be severely damaged. This damage may lead to cancers of the skin and eyes. XP has been identified in people in every ethnic group all over the world.

Many persons with XP will get an unusually severe sunburn after a short sun exposure. The sunburn will last much longer than expected, perhaps for several weeks. This type of sunburn will usually occur during a child's first sun exposure, and it may be a clue to the diagnosis of XP. However, some people with XP will not get a sunburn more easily than others, and the disease will be undetected until unusual skin changes appear over time.

What are the signs and symptoms of Xeroderma Pigmentosum (XP)?

Most patients with XP will develop many freckles at an early age. Continued sun exposure will lead to further changes in the skin, including irregular dark spots, thin skin, excessive dryness, rough-surfaced growths (solar keratoses), and skin cancers. These skin changes will resemble those of elderly people who have spent many years in the sun. In people with XP, these changes caused by sun damage often begin in infancy, and almost always before age 20. The first skin cancer may develop before a person is 10 years old, and many other skin cancers may continue to form in the future. Cancers develop most often on the face and other sun-exposed parts of the body including the eyes, lips, and tip of the tongue.

The eyes of a person with XP are often painfully sensitive to the sun and may easily become irritated, bloodshot, and clouded. Non-cancerous and cancerous growths on the eyes may occur.

How is Xeroderma Pigmentosum (XP) diagnosed?

XP can usually be diagnosed in the laboratory by measuring the DNA repair defect. This test is performed on skin or blood obtained from the patient. Soon, only a few cells may be needed to make this diagnosis.

What are the causes of Xeroderma Pigmentosum (XP)?

Two factors combine to cause the abnormalities in XP. First, a person inherits traits from each parent, which, when combined, lead to an unusual sensitivity to the damaging effects of ultraviolet light. Second, exposure to the sun, which contains ultraviolet light, leads to changes in the skin and eyes. Ultraviolet light damages the DNA in cells and disrupts normal cell functioning. DNA within our genes contains all the coded information needed to direct cell functions. Damaged DNA is mended by the DNA repair system. But the DNA repair systems of people with XP do not function properly. As a result, unrepaired DNA damage builds up and causes cancerous cell changes or cell death.