{}
After larotrectinib’s unprecedented results, what’s next for precision medicine?

After larotrectinib’s unprecedented results, what’s next for precision medicine? 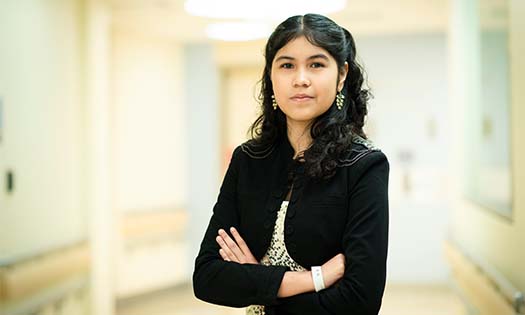 When 11-year-old Briana Ayala came to Children’s Health℠, she had a refractory undifferentiated sarcoma growing around her aorta. Surgeons resected as much of the tumor as possible, but it quickly grew back – until it was so large that Briana’s abdomen was visibly swollen. That’s when we sequenced the tumor and discovered that it had a fusion of the NTRK2 gene, and could potentially be disarmed by an innovative drug called larotrectinib.

Briana’s oncologist, Ted Laetsch, M.D., a physician at Children’s Health and Associate Professor of Pediatrics at UT Southwestern Medical Center, enrolled Briana in a Phase I trial of the new drug, which is designed to inhibit TRK fusions. Two weeks later, her tumor had nearly disappeared. Today, Briana is a healthy high schooler with dreams of working in fashion design. Briana’s story is the latest example of how physicians in the Pauline Allen Gill Center for Cancer and Blood Disorders at Children's Health are using precision medicine to transform care for their patients.

“Larotrectinib has been a home run for certain patients with rare soft-tissue cancers, and it might be just the beginning,” Dr. Laetsch says. “We’re working to create similar results for many other cancers, by pinpointing the mutations that drive them and pursuing a new wave of potential treatments.”

Children’s Health was one of eight centers participating in the Phase I larotrectinib trial, which gave the drug to 24 pediatric patients with TRK-positive cancers including infantile fibrosarcoma and papillary thyroid cancer.

The trial’s results, published in The Lancet Oncology, were unprecedented: 93 percent of patients with a TRK fusion responded positively to the drug. All but one of those patients saw their tumors regress.

Similar results were reported in a New England Journal of Medicine paper that included data for both children and adults. Three-quarters of those patients responded to larotrectinib, and 71 percent saw their cancer stop progressing for at least a year.

“We saw slight decreases in blood counts, slight elevations in liver function tests, and occasionally patients experienced nausea and vomiting – but nothing like what you’d see with chemotherapy,” says Dr. Laetsch, who led the trial’s pediatric arm at Children’s Health and UT Southwestern Medical Center.

When Should You Sequence Cancer Patients?

In November, the FDA approved larotrectinib under the brand name Vitrakvi – making it the first drug to get initial approval for a specific molecular change, regardless of tumor type. With more and more targeted therapies in the pipeline, one key challenge is knowing which patients to sequence.

At Children’s Health, we are currently searching for tumor mutations in every patient with relapsed or refractory cancer. We use that information to try to identify a treatment that matches that specific mutation.

For example, we are part of a team leading several nationwide studies that evaluate the outcomes of targeted therapies based on molecular profiling.

Pursuing the Next Generation of Precision Drugs

Still, far too many patients need treatments that are more effective and less toxic than chemotherapy and radiation. That’s why the UT Southwestern physicians practicing in the Gill Center have also launched a Precision Medicine Program to strive to better match new treatments like larotrectinib to tumors that are caused by specific genetic mutations.

Participating in national studies – as well as sequencing patients through our own institutional protocol – is helping us build a library of mutations behind individual cancers, so we can stay on the lookout for drugs that target them.

Additionally, the UT Southwestern physician-scientists working in the Gill Center at Children’s Health are making patient-derived xenografts – experimentally-derived tumors generated from an individual’s tumor – that closely resemble human tumors. Our team hopes that these types of experimental models can help us design even better treatments in the future.

Now Dr. Laetsch is getting set to lead a Children’s Oncology Group trial that investigates larotrectinib as a frontline therapy for children with tumors driven by a TRK fusion.

“This could potentially save children from morbid surgery, chemotherapy and radiation,” he says.

It’s the latest step in our push to make toxic therapies obsolete. In addition to our precision medicine work, the Gill Center at Children’s Health was one of the largest enrollers in clinical trials leading to the approval of Kymriah, the first CAR T-cell therapy approved for pediatric acute lymphoblastic leukemia. Dr. Laetsch was a key contributor to the New England Journal of Medicine paper that published those trials’ results. Now we’re offering trials of the latest CAR T-cell therapies.

“Whether it’s CAR T-cell therapies or targeted drugs, we’ve built a comprehensive research program that constantly carries insights back and forth from the lab to the clinic,” Dr. Laetsch says. “That accelerates our progress and sets the stage for a future where many, many more children will not only be cured of their cancer – they’ll have far fewer lifelong effects.”

Children’s Health offers a robust clinical trials programs, with upwards of 75 oncology and 20 hematology trials open at one time. We also care for more than 300 new pediatric cancer patients each year. This expertise, combined with our leading research programs, helps explain why U.S. News & World Report ranked Children’s Health among the top pediatric cancer programs in 2018-19.