After open heart surgery to repair a damaged mitral valve, Zeke finds his passion out on the track

At 13 years old, Zeke's life has already been full of adventure. He spent most of his early years living in a remote mountain village in Papua New Guinea as the child of missionaries. He enjoyed an active childhood, running through fields and mountain trails with his siblings and friends and playing sports, like football.

By the time he was 11, Zeke and his family had moved back to the United States. One day, he mentioned that his chest was hurting – but since he was so healthy, his parents didn't think much of it.

"We thought it would just go away," says Zeke's dad, Chad.

When his symptoms worsened and he began feeling pain while lying down, Zeke's family realized it was time to see a doctor.

"Dr. Sing thought that Zeke could have possibly had an undiagnosed, asymptomatic case of strep throat that turned into rheumatic fever, which caused his immune system to attack his heart," Chad says. 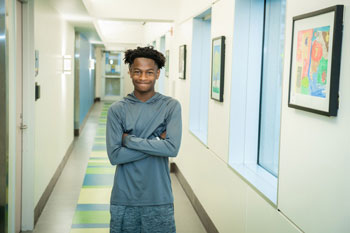 In June 2019, Zeke began antibiotics immediately to stop the infection from further damaging his heart. There was a possibility that his heart would heal on its own, so Dr. Sing and Zeke's family decided to wait to pursue any surgery.

But by July 2020, when COVID-19 shut down the country, it was clear that Zeke would need surgical intervention. It was then that he met Robert Jaquiss, M.D., Division Director of Pediatric and Congenital Cardiothoracic Surgery and Co-Director of The Heart Center at Children's Health and Professor of Thoracic and Cardiovascular Surgery at UT Southwestern. In a 4.5-hour-long, open heart surgery, Dr. Jaquiss found that the mitral valve was irreparably damaged, so he replaced Zeke's mitral valve with a man-made "mechanical" heart valve.

"If possible, we always strive to repair a patient's own valve, but Zeke's was too badly damaged for that to be possible," says Dr. Jaquiss.

Zeke's surgery was successful in repairing his heart, but being patient in his recovery was a challenge, especially for an energetic adolescent who was so used to running from activity to activity.

"For six weeks, Zeke couldn't do any activity or lift anything to let his heart and his incision heal," says Zeke's mom, Janeene. "He was so brave through it all but seeing our child in pain was hard."

Over time, Zeke's pain and activity restrictions subsided. Just one month after surgery, an echocardiogram showed that his heart had already showed signs of healing.

Zeke soars on the track and in the sky 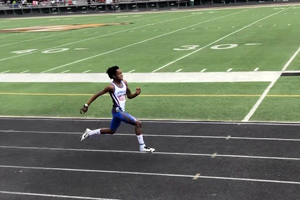 After Zeke's surgery, contact sports were no longer an option. But Zeke soon realized that his speed on the football field translated well onto the track as a sprinter. He began training with a local track club, competing in the 100m, 200m and 400m individual races as well as the 4x100m, 4x200m and 4x400m relays. By the summer of 2021, Zeke and his relay team qualified to compete at the National Junior Olympic Track & Field Championships in the 4x400m race.

"He's not just running, he's running at an incredible level," says Chad. "It's amazing to see how healthy he is and how strong he is, and that even after all he has gone through, he is able to keep up with the kids in his track club."

Dr. Sing continues to follow Zeke's progress closely to ensure the blood flow in his heart is moving effectively and his mechanical valve continues to function well. Zeke will require blood thinners for the remainder of his life to reduce the risk of blood clots and takes monthly penicillin shots to ensure the strep infection doesn't reoccur. But he doesn't let any of his medical challenges hold him back and relies on his faith as he plans for his future – which he hopes will include a career as a pilot. At just 13 years old, he has already started his flying lessons.

"From the moment I first met Zeke, his positive attitude and resilience have been truly inspiring," says Dr. Sing. "He has not let his heart condition limit his passions or dreams. We can all learn a valuable lesson from him."

With Zeke's perseverance, and his family and care team cheering him on, we know he will continue to soar – whether on the track or in the sky.

The Heart Center at Children's Health provides expert diagnosis and effective treatment for the full spectrum of pediatric heart conditions. Leaders in pediatric cardiac care, we're committed to achieving the best possible outcome for every child's heart. Learn more about our cardiology program and services.