Born with VSD, a young patient shows her heart is strong and full of joy

When Mandye was expecting her second child, she, her husband, David, and their daughter, Isla, were excited to learn that genetic testing would allow them to find out the sex of the baby when she was just 10 weeks pregnant. A week after a simple blood draw, test results revealed the trio would be welcoming another daughter, Vivie, to their family. Mandye and David also learned that Vivie had Down syndrome.

"At first that news brought a whole range of emotions," Mandye says. "We didn't know what it would mean for Vivie or for our family. We just wanted to know that she would be okay."

Nearly half of all children with Down syndrome are born with a congenital heart defect, so Mandye and David soon met with Colin Kane, M.D., Pediatric Cardiologist at Children's Health℠ and Associate Professor at UT Southwestern, to learn more about the condition of Vivie's heart.

Through a sonogram, Dr. Kane examined Vivie's heart in utero and informed her parents that it appeared there was a hole in Vivie's heart, but there was a chance it may close on its own before birth. As Vivie's family joyfully prepared for her arrival, doctors continued to monitor her growth and development throughout the rest of Mandye's pregnancy.

Vivie was born at 36 weeks and was admitted to the neonatal intensive care unit (NICU). An ultrasound of her heart confirmed that a hole remained in the septum between the lower chambers of Vivie's heart, called a ventricular septal defect (VSD). Vivie remained in the NICU while doctors and nurses monitored her closely as she struggled to gain weight.

"Because she was working so hard to pump blood through her body due to the hole in her heart, she was burning more calories than she was taking in during her feedings," Mandye says.

Three weeks later, Vivie was eventually able to join her proud big sister at home, but Dr. Kane told her family that she would soon require surgery to repair her heart defect. That day came just a few months later. 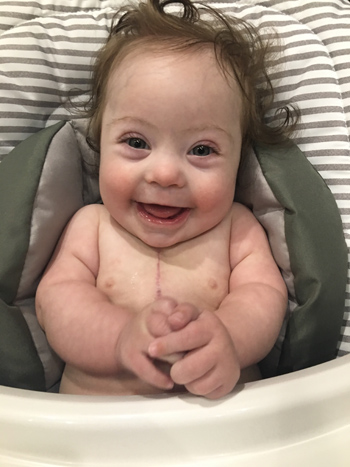 At just 4 months old, Vivie came to Children's Medical Center Dallas where Robert Jaquiss, M.D., Division Director of Pediatric and Congenital Cardiothoracic Surgery and Co-Director of the Heart Center at Children's Health and Professor at UT Southwestern, performed open heart surgery to close the VSD. Mandye says the day of surgery was filled with mixed emotions.

"We had been counting down the days until she could have surgery because we were trusting and praying that her quality of life would improve," says Mandye. "At the same time, it was scary to think about our baby going in for open heart surgery, but Dr. Jaquiss was just fantastic."

Her family was thrilled that Vivie recovered quickly from surgery and was back home just a few days later. Mandye and David noticed a difference in her demeanor right away.

A family is grateful for their thriving toddler 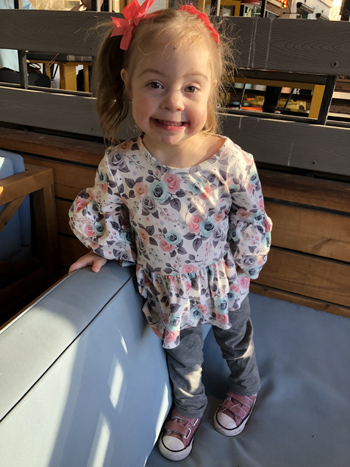 Today, Vivie is a happy toddler who loves music, playing outside and adores her big sister, Isla. Dr. Kane continues to monitor her progress, and her most recent echocardiogram showed that her heart is healthy and will most likely not require further surgeries.

"Now that the hole in Vivie's heart is closed, I expect her to continue to thrive in the future," says Dr. Kane. "Apart from a small scar on her chest, you would never know that she was born with a heart defect."

Though Mandye and David acknowledge that Vivie has already faced more than her fair share of challenges while young, they are incredibly grateful for the joy she brings to their family on a daily basis.

"Vivie has taught us that what you think may come into your life that will cause grief may just be the very thing that will actually save it," Mandye says. "She has changed our entire family and made each of us better; it really is incredible."

Learn more about the Heart Center

The Heart Center at Children's Health provides expert diagnosis and effective treatment for the full spectrum of pediatric heart conditions so that children can have healthy childhoods. Learn how we care for congenital heart defects at the Heart Center.