Vaping and your teen: What are the risks?

How to help your teen avoid this unhealthy, risky habit

Over the past decade, vaping has skyrocketed in popularity, especially among high school students. Vaping, the act of inhaling vapor through an electronic cigarette (e-cigarette), often acts as an alternative to traditional cigarettes. Liquids for e-cigarettes are available in many flavors such as mint, mango and crème brulee, which may boost its appeal for teens.

However, studies are revealing that vaping and the use of e-cigarettes are not as safe as many may think. Here’s what to know about vaping and its health risks. 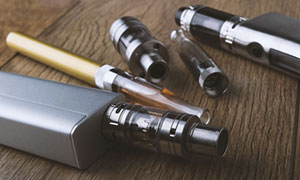 Are e-cigarettes safer than regular cigarettes?

Many people use e-cigarettes as a substitute for tobacco cigarettes because they do not contain tobacco, usually do not have a scent and they don’t produce secondhand smoke. Though vaping doesn’t expose users to tobacco, it can still cause nicotine addiction. Nicotine is a chemical that can affect neurological health, especially in teens whose brains are still developing.

“Many years ago, nicotine addiction was considered less of a problem and not as risky as smoking tobacco,” says David Atkinson, M.D., Medical Director of the Teen Recovery Program at Children’s Health℠. “However, people with nicotine addiction are frequently anxious and depressed, have less of an ability to concentrate without the drug, have less patience and feel worse than their peers.”

Dr. Atkinson also says becoming addicted to nicotine, particularly at a young age, can lead to other addictions including drugs and alcohol. Studies show vaping also increases the risk that teens will use tobacco and cigarettes in the future. Because many teens have the perception that vaping is safe, teens who may never have smoked or developed a nicotine addiction can become hooked.

“Nicotine addiction causes kids to be more curious and more willing to experiment with other risky behaviors,” says Dr. Atkinson. “If they don’t have their vaping device with them, they may be more likely to use a regular cigarette if it was made available to them.”

Besides nicotine, e-cigarettes and vaping cartridges can also contain a number of chemicals and toxins, including diacetyl, formaldehyde and other carcinogens. When heated and inhaled, these toxins pose many health dangers including “popcorn lung,” a condition which scars the lungs and blocks tiny airways and leads to respiratory problems. Studies have linked vaping to other health risks, including a higher risk of a heart attack. Learn more about potential damage to the lungs and other health effects of vaping.

What parents should know about Juuling

With its sleek design, the Juul is a brand of e-cigarette that is especially popular with teens. It looks similar to a USB drive and even charges when plugged into a laptop. Because of this small size, and because it doesn’t generate as much smoke as other e-cigarettes, the Juul makes it easier for teens to vape in places like school.

“Teens see Juuling as a more sophisticated version of vaping, but it is actually more dangerous,” says Dr. Atkinson. “While they may see the trend as harmless, it is very addictive due to the higher concentration of nicotine in each hit. Parents need to have the confidence to talk to their child about its dangers.”

Juuling has the same health risks as other e-cigarettes, but Dr. Atkinson warns it is also a faster way to get addicted to nicotine. Teens are more likely to feel sick due to the amount of nicotine delivered to their body in a short amount of time. Another danger of Juuling is that the device is not only used for nicotine. It can also be used with vaporized marijuana.

How to talk to your kids about vaping

With all the misconceptions about vaping, it’s important for parents to have open and honest conversations with their teen about these dangers and health risks.

“Schools are becoming more aware of the use of vaping devices during school hours – yet we still need to expand the awareness and address the issue – just as one would regarding drugs, cigarettes and alcohol,” says Dr. Atkinson.

Dr. Atkinson says parents should take the lead in talking to their child about vaping. Encourage your child to leave the room if they see someone vaping and reassure your child that they can tell you in confidence about any vaping they see at school.

Talk to your teen about the future problems that vaping can cause. For instance, some employers test for nicotine addiction as part of the hiring process. Others might view smoking and vaping as unprofessional, which could affect your teen’s ability to get a job.

You should also stress to your teen that they could be setting themselves up for addiction and be honest with them about the realities of addiction.

“The problem with nicotine addiction is that the enjoyment of the drug decreases as the desire for it increases,” says Dr. Atkinson. “It’s a losing game that increases the risk for anxiety and depression.”

To help your teen avoid vaping, start talking to them about the risks early on, as early as 5th grade. Be sure they know that it isn’t a safe alternative to smoking, and it can lead to addiction and other health problems.

Learn more about the health effects of vaping on the Children's Health Checkup podcast.

Learn more about the Teen Recovery Program at Children’s Health and how our experts help teens recover from substance abuse.