Twins Cora and Farrah were born on March 15, 2017, in Tyler, Texas, at just 24 weeks. They each weighed less than 1.5 pounds and faced significant challenges.

The twins' mom, Rebekah, still remembers the words Vedanta Dariya, M.D., neonatologist at Children's Health and Assistant Professor at UT Southwestern, said to her when they arrived.

"Dr. Dariya told me that he knew that what we were going through was very difficult, and though he couldn't fully understand how I was feeling, he was going to do everything he could to make it as easy as possible on me," says Rebekah. "I knew that Cora was in good hands." 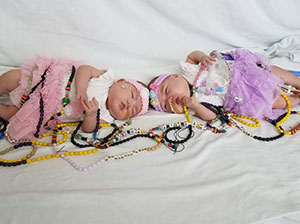 A few weeks later, Cora's sister, Farrah, joined her at Children's Health after going into septic shock. Her kidneys had stopped working, and she was starting to show signs of multi-organ failure. Farrah was placed in an isolation room and given medication to help her body get rid of the excess fluid, but all Rebekah could do was wait.

"I'll never forget looking into Farrah's room through the window and seeing the nurse hold up a big, full wet diaper with a big smile on her face," Rebekah says. "It was exactly what we had been waiting for!"

The twins grow stronger through twists and turns

Cora and Farrah continued to get stronger each day, though their journey wasn't without its twists and turns. "It's like one giant roller coaster," Rebekah says. "You never know what's around the next corner, and you just hope it's not a big loop."

Cora was discharged in early October and joined her mom at the Ronald McDonald House Dallas, where Rebekah had been staying while the twins were in the hospital. Because Cora still was on oxygen and had a feeding tube, she was eligible for nursing care during the day, which gave Rebekah time to visit Farrah, who remained in the NICU until just before Thanksgiving. 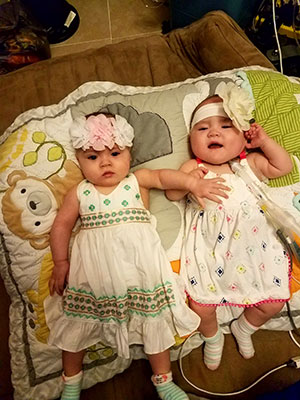 Farrah needed a tracheostomy and a home ventilator for her severe lung disease.

"Our chronic lung disease team provides a multidisciplinary approach to these infants that includes physicians from ENT, pediatric surgery, pulmonology, cardiology, respiratory therapy and nursing to ensure comprehensive and specialized care for these infants," she says. "Additionally, Children's Medical Center is a member of the Children's Hospitals Neonatal Consortium (CHNC), a group of leading national experts in chronic lung disease. Through our local and national efforts, we are able to develop the most thorough and comprehensive care for this vulnerable patient population, and we remain committed to a rigorous, evidence-based approach to improving outcomes for babies with this disease."

The girls are now over a year old and are doing well. In fact, both of them are now walking! Cora is completely off oxygen and is relying less and less on her feeding tube each day. Farrah is starting to babble and only requires oxygen at night as she continues to make progress.

Both girls work with an in-home occupational, physical and speech therapist. They also regularly see a multidisciplinary team of UT Southwestern specialists at Children's Health. 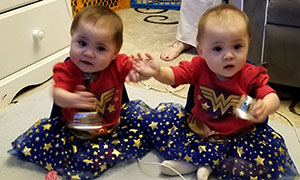 Looking back, Rebekah says she's grateful for the support she's felt from Children's Health during their journey.

"The doctors and nurses were my family," she says. "They fought for my kids and were my support system when I had no one else to turn to."

Rebekah hopes her daughters will soon have as normal a life as possible, given their early challenges.

"My goal for my babies is to have the same opportunities as their peers to live to their full potential," she says. "I want them to discover their own strengths – whatever those may be – and I'll support them the best I can."

The only NICU in North Texas ranked by U.S. News & World Report and among the top 25 NICUs in the country, the Level IV NICU at Children's Health is equipped to deal with the smallest and sickest of infants, with medical care provided by renowned neonatologists from UT Southwestern. Learn more about our Fetal Neonatology program and services.