Thrive Program provides support and resources to Lucas and his family

Jenna was 27 weeks pregnant with her son Lucas when she traveled to Alabama to visit her new nephew. She made the relatively short flight from North Texas without incident and was excited to spend time with their family's newest member.

But just 24 hours after landing, Jenna's water broke, sending her to the emergency room at a local hospital. Doctors determined that Lucas was in a breech position and needed to be delivered via emergency caesarean section. Given Lucas' gestational age, the small hospital was not equipped to handle the procedure. 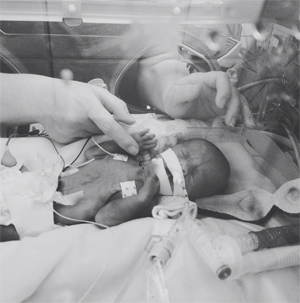 Bad weather prohibited Jenna from being airlifted to a larger regional hospital, so they began preparing her for transport by ambulance. Just 30 minutes into the two hour drive, Jenna's contractions became so strong that the driver knew they wouldn't make it in time. Instead, he pulled into the nearest hospital just minutes before Lucas was born.

Shortly after birth, Lucas was transferred to the closest neonatal intensive care unit (NICU) in Birmingham, AL. He remained there for the next three months where he faced a number of challenges including a spinal tap, multiple blood transfusions, pneumonia, and other breathing and feeding issues. Finally, on Lucas' original due date, he was discharged from the hospital, and he and his family began the drive back home to North Texas.

During Lucas' time in the NICU, he was part of a clinical study to explore outcomes in infants given breastmilk or formula during their hospitalizations. As part of the study, his family needed to identify a care team to evaluate Lucas later in life to complete the study. Fortunately, a solution was right in his family's backyard.

"The Children's Health℠ Thrive Program was highly regarded and suggested to us," Jenna says. "All of our paperwork was transferred, and caseworkers called every few months to check in with us."

Just after his second birthday, Lucas was evaluated by Roy Joseph Heyne, M.D., Pediatrician in the Children's Health THRIVE Program and Professor at UT Southwestern, who performed a thorough neurological exam, and Kristine Tolentino-Plata, M.S., a Developmental Specialist, who administered the Bayley Scales of Infant and Child Development. The results were relayed to the research team in Alabama to complete the research study. The THRIVE team also recommended Lucas begin speech therapy, which is provided through a statewide program called Early Childhood Intervention (ECI) services.

At age 2, Lucas loves puzzles and his alphabet toys. He continues to work with a speech therapist, and his mom describes him as a joyful and loving child who has a witty sense of humor and excellent memory.

"Lucas is a perfectly healthy toddler," says Jenna. "We're still trying to close the preemie gap delay, but the Thrive Program has given us a support system and provided us with tools to help Lucas succeed."

Jenna, who owns her own cookie bakery, also enjoys a sweet connection to Children's Health: She lovingly made red balloon cookies for the 40th anniversary celebration of the Thrive Program.

"We've worked with Children's Health for many years," Jenna says. "Each event at Children's is special, but the Thrive celebration was extra close to my heart. It's always an honor for us to be associated with such a fine organization."

Thrive at Children's Health is a unique program that offers specialized comprehensive primary care to help premature babies and full-term babies with complex conditions reach their full potential in life.