The power of a hopeful heart

After being born with a congenital heart defect, a transplant patient inspires others to push forward with positivity

When Casey speaks about her heart condition, it’s easy to forget that she’s just a teenager. With bravery, poise and knowledge, she shares how she was born with a heart defect and how now, 15 years later, she’s grateful to have received a heart transplant. Casey’s mom, Bethany, always knew that a transplant would be the ultimate “fix” for her daughter’s condition – she just never imagined it would happen this way.

When Bethany was pregnant with Casey, she found out that her daughter had hypoplastic left heart syndrome (HLHS), a rare congenital heart defect in which the left side of the heart does not form correctly. Like many HLHS patients, Casey underwent a series of three open-heart surgeries in her first few years of life. While the situation was of course frightening, Casey’s surgeries were successful – and she enjoyed a relatively healthy childhood after that.

Every six months, Casey visited her cardiologist for a routine check-up. Year after year, nothing changed. “In fact,” Bethany says, “at our last visit, the cardiologist said Casey looked in such good shape, that we could even go a full year before coming back.”

Unfortunately, two months after that appointment, the situation rapidly changed.

From heart attack to heart transplant 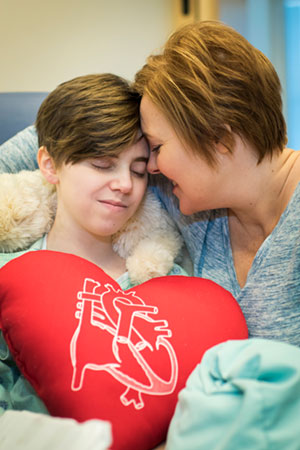 Early on a Saturday morning in September 2017, Casey was getting out of bed when she felt an excruciating pain in her chest. “It felt like someone took a 50-pound weight, dropped it right on my chest and just left it there,” describes Casey.

Her dad took her to the local Emergency Room, where they ran tests and determined she must have pulled a muscle in her sternum. She was discharged that day. Concerned that their daughter was experiencing something more serious, Casey’s parents kept a close eye on her. Two weeks later, she ended up back in the hospital with two blood clots in her aorta.

Casey remained in the hospital for two weeks, but she didn’t get better as everyone expected. Her cardiologist referred her to the Heart Center at Children’s Health℠ to start the conversation about eventually getting a transplant. There, the team found that Casey’s heart was in more serious condition than they had thought. An MRI revealed that Casey had actually experienced a heart attack, and that she was having lingering complications.

“When they told us they had answers, I got chills,” remembers Bethany. “Obviously, we would’ve preferred to hear good news, but having answers and a realistic expectation of where we can go from here can put you at ease.”

The next step for Casey was a heart transplant – something the family had always known was a possibility, but one that was hard to prepare for. “A year ago, I never would have thought we’d be here now,” says Bethany. “With how healthy Casey had always been, we honestly thought we had longer.”

Powerful hope and plans for the future

On March 1, 2018, Casey received her new heart. The surgery was long, but Casey is recovering well and is, as always, staying optimistic.

“I like to keep a positive outlook on life,” she says. “Even though I’m going through this, I know it could be a lot worse. You know, you can have a really crummy heart, but you can always have a good attitude and you can choose to look at a life in a positive way.”

Casey’s hopeful attitude makes an impression on everyone she meets, including the team at Children’s Health.

Part of staying positive relies on a strong support system. “I have a great family, and the doctors and nurses here are great,” says Casey. The students at Casey’s school recently had “Wear Red for Casey” day. “I felt so honored,” she says. “It was really cool to have that kind of support.”

Casey looks forward to eventually returning to school. She has a long list of things she wants to do there – from starting an art club to joining a soccer or dance team. Mostly, she looks forward to having the freedom to do the normal stuff that she didn’t always think she’d be able to do.

“She’s going to be better off than she’s ever been,” says Bethany. “She doesn’t even know what that’s going to feel like, to not get tired after running. I hope that she just flourishes and that she lives a full life, using her experiences to help her love life more. I hope that she’s able to do everything she wants to do with passion and with all the courage that she’s already had to have.”

The Heart Center at Children’s Health is celebrating 30 years of transforming lives through cardiac transplantation. The nationally renowned team of pediatric cardiologists and subspecialists treat the whole spectrum of heart problems, with a commitment to excellence. Learn more about our treatments and services.