After facing multiple congenital heart defects, Rowan and her family and are now providing support to others

Before Rowan was even born, her parents knew she and her heart were special. At 23 weeks, an ultrasound revealed Rowan had several congenital heart defects. Imaging showed the growing baby had double outlet right ventricle, a category of congenital heart disease where both of the arteries that come out of the heart come from the same pumping chamber. She also had a large ventricular septal defect (a hole in the wall of the heart) and mild pulmonary artery stenosis (narrowing of the artery that travels from the heart to the lung).

"Of course, at that time, I had no idea what any of that meant," says Haley, Rowan's mother. Haley underwent frequent scans throughout her pregnancy to keep an eye on Rowan's heart and development. Despite Rowan's known heart conditions, the family and doctors still expected a standard delivery at their hospital in Austin, Texas.

When the time came for delivery, however, Rowan was born blue. After additional examinations, it was discovered that Rowan faced more problems than had previously been identified. Doctors discovered she also had transposition of the great arteries (a serious condition where the two arteries of the heart are reversed where they are attached) and coarctation (narrowing) of the aorta.

"They came into our room and let us know that the transport team from Dallas would be here in two hours," remembers Haley. "We couldn't believe it."

Finding confidence during a daunting time

"Our doctor came in the night before surgery and was a ball of energy and smiles," says Haley. "She sat down with us and put us at ease by answering all our questions."

The team felt confident in performing Rowan's surgery, not only because of their experience but because of the use of new and innovative virtual reality (VR) technology available at the Heart Center. Using VR goggles, they studied every detail of Rowan's heart and to created the best plan for Rowan's special heart.

Every patient's heart is subtly different. Even with common congenital heart defects, there are a lot of variations between patients' hearts. The goal is to use VR to visualize each patient's unique anatomy and develop the best plan for them. It's truly individualized medicine.

The doctor's confidence assured Haley and Zachary that their little girl was in the right hands. "They were so excited about the technology and knew just what to expect – it really made us trust them even more," adds Haley.

Everyone at Children's Health – from the front desk staff who acknowledged them by name each morning to the care team who let Haley hold Rowan all morning until she went into the operating room. The team went out of their way to help them stay calm on one of the scariest days of their lives.

Rowan went into the operating room at 7:15 in the morning. Twelve hours later, her surgery was complete.

A challenging road to recovery for Rowan

As Rowan recovered from surgery, her parents were cautiously optimistic. Five days after surgery, Rowan was strong enough to be taken off her breathing machine. But she still faced challenges gaining weight and eating. She spent more than two months at the hospital before being locally discharged. Due to her diagnosis, Rowan would need further surgeries on her pulmonary valve. This meant that Rowan couldn't go home to Austin yet, but she was able to stay at her grandparents' house nearby. 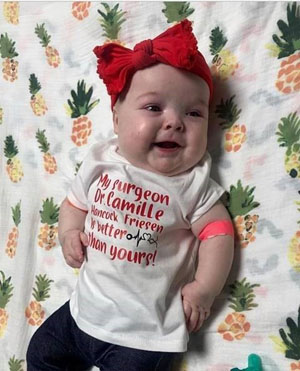 Just nine days after leaving the hospital, Rowan was back for another surgery to repair her narrowed pulmonary artery. Though the surgery went well, she had a hard recovery that resulted in breathing and feeding problems. As the new parents struggled to adjust to life back in the CICU, they found support all around them.

"The nurses that cared for our little one were just amazing," says Haley. "They tried to bring normalcy into our days and made us all feel like being in the hospital was a bit normal. On days I could barely stand, they held me up. They truly became family to Rowan and to us."

It was another month before Rowan finally went to her home in Austin for the first time. But after noticing some concerning symptoms, Haley reached back out to the team at Children's Health. Three months later, Rowan had her third heart surgery to repair a foreign valve (conduit) that worked in place of her pulmonary artery. This time, Rowan's recovery was much faster, and she was home a week after surgery.

Getting closer to Children's Health and to other heart warriors 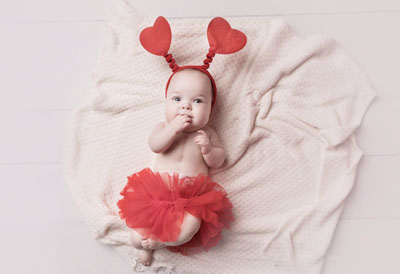 For several months of her life, Rowan and her parents were traveling between Dallas and Austin for appointments. The travel took a toll on the family, and as it became clear that Rowan still had a lot of treatment ahead of her, they decided they needed to be close to the experts at the Heart Center. Haley and Zachary quickly found an apartment and made the move just weeks later.

"It is such a relief to know we are just 15 minutes up the road from Children's Health," says Haley. "They know her, and they love her, and they treat us like family."

Rowan's condition has changed her parents' lives in other ways, too. Haley is starting a Pediatric Congenital Heart Association Chapter of Texas to help connect parents and families of children with congenital heart defects. She is passionate about spreading awareness about heart defects and helping other parents find the answers and support they need. 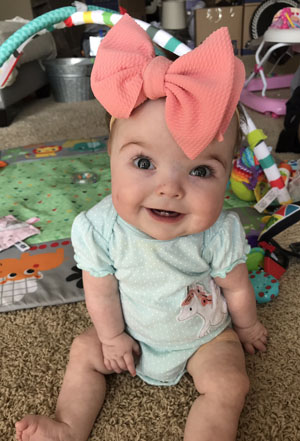 "I want to be the person that I needed for help and guidance throughout this journey for another mom," says Haley. "It's important to hear, 'I've felt that too and I'm here for you'."

At age 1, Rowan is full of energy and joy.

"She is one of the happiest babies and feistiest kids," says Haley. "She is very social and makes friends with everybody. Her heart is big, and she is the kindest little girl."

Rowan has some development delays, but she is catching up quickly with the help of speech, physical and occupational therapists. Her parents continue to advocate for Rowan and share her story because they know that while her heart is special, their journey with a congenital heart defect is actually a common one.

"Connect with other families," Haley encourages other parents of children with a congenital heart defect. "Share how you're feeling and talk about your experience. You are not alone."

The nationally renowned team of pediatric cardiologists and subspecialists in the Heart Center at Children's Health treat the whole spectrum of heart problems, with a commitment to excellence. Learn more about our cardiology treatments and services.