Samu bravely manages seizures and reaches for the stars

In February 2017, Kata heard a strange sound on her monitor in the middle of the night. It sounded as if one of her children were drowning in their beds. She immediately went upstairs to check on her kids and saw that something was wrong with her son, Samu, then 7 years old.

"His eyes were wide open, his body was stiff and he had a foamy mouth," Kata says. "That was the first time I had found him not okay."

Samu's father, Charlie, got Samu out of his bunk bed, but he had a hard time walking and talking. Though his eyes were open, he kept saying that he could not see anything. Kata and Charlie knew something was very wrong but didn't know what. In a few minutes, Samu seemed to be fine, and the family tried to go back to bed.

The next morning, Kata took Samu to the pediatrician to find out what was wrong. The pediatrician said Samu was experiencing night terrors and told Kata he would be okay.

But Samu continued to experience similar night-time episodes, and Kata worried about her son. She started to sleep in the same room as Samu, and Charlie even filmed the events as they happened.

"We felt like no one believed us," says Kata. "But we knew something was wrong."

In July, Samu's episodes got worse. One night, Kata could not wake him from his "night terror," and when Samu finally did regain consciousness, he vomited repeatedly. The family called 911, and an ambulance quickly took Samu to the emergency department at Children's Medical Center Plano.

At the hospital, Samu remembers waking up and falling asleep over and over again quickly. He had a seizure at the hospital – and received a diagnosis of epilepsy.

Samu underwent sleep studies and an MRI. Though the sleep study showed no seizure activity, the MRI showed a spot on Samu's brain, potentially an injury that occurred during labor. That injury, combined with the stress of many changes, was causing Samu's epilepsy.

Though they hadn't realized it, Samu had likely been experiencing seizures in the months leading up to that first night Kata had seen in February.

"I remember my first seizure," Samu says. "I started shaking, and I thought I was electrified. Then after we found out what it was called, I knew I'd had a seizure."

Samu's physician prescribed antiseizure medicines to Samu, but his seizures continued. They tried play therapy to relieve stress as well as antidepressants, but the medicine was not right for Samu. They left him feeling moody and lethargic, not like the energetic, happy child he was.

"We had a couple of rough months," says Kata. "It was killing us to see him so sad and in this hole we couldn't get him out of. I couldn't sleep because every time he moved, I woke up."

Samu's care team worked with his family to carefully make changes in Samu's medications, and they were able to find a medication that both stopped the seizures and improved his mood. And, at the suggestion of another family who had sons with seizures, Kata began giving Samu CBD oil capsules. The combination has been effective, much to her relief.

"It's just been night and day," says Kata. "He's laughing again. He's a normal 9-year-old boy. We haven't had any epilepsy seizures for months. Our goal is to be seizure-free for two years so we can cut back on his medication."

The team also worked with Samu's school to ensure he'd be safe all day. He has a buddy with him at all times, so he is never alone. They taught his friends what a seizure looks like and what they need to do if they see him have a seizure.

Since his diagnosis, Kata and Charlie have noticed a lot of seizure triggers, like loud noises, bright lights, big changes in temperatures or even high amounts of sugar. They try to avoid these triggers as much as possible, which can mean that Samu misses some birthday parties or sleepovers.

Thankfully, Samu continues to improve after changes in his medication. He sees his physician each year, but less frequently than before. The family also calls each time Samu is sick, which can put him at a higher risk for seizures. 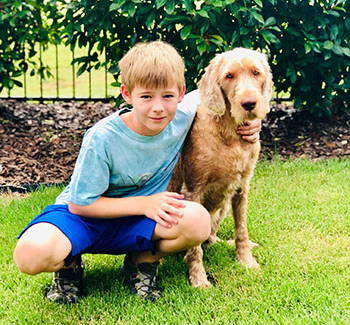 "No matter when I call the team, they are always available," says Kata. "We feel like Children's Health℠ is our other family that we can count on when we need to."

Samu can now sleep in his own bed while wearing a seizure alert bracelet and being watched by a video monitor. His dog, Dio, also sleeps by his side and has been trained to turn Samu's head if he has a seizure – which brings Samu, and his parents, added comfort.

Samu lives as normally as possible and enjoys playing Minecraft, studying science and horseback riding. He hopes to be an astronaut when he grows up.

"I'm kind of worried about being in space and having a seizure," Samu says. But he feels confident they'll be able to figure out his seizures by the time he is ready to head for the stars.

The Level 3 Epilepsy Center at Children's Medical Center Plano offers a full range of diagnostic and treatment options for children with epilepsy. Our team can see your patients quickly to confirm or clarify a diagnosis and match them with the most effective treatment – from medications to dietary therapies to surgery. Learn more about our epilepsy treatments and services.