After a long search for answers, Preston found expert care for Crohn's disease and can now enjoy his active teenage years

Preston has always been happy and extremely active. He enjoys playing sports and video games and spending time with friends.

So when he began experiencing severe stomach pains and losing a considerable amount of weight in the summer of 2016, his parents suspected something might be seriously wrong. Preston was 11 at the time.

"We took Preston to his pediatrician who ran several tests, but everything came back normal," says his mom, Marlo.

Preston was referred to a food allergy specialist, but after several appointments, his doctor still couldn't figure out what was wrong. The family tried food elimination diets but nothing helped.

"As we left our last appointment with the allergist, we realized it would be up to us to figure it out," Marlo says.

For the next few months, Preston's symptoms persisted until a friend suggested they reach out to Bradley Barth, M.D., a pediatric gastroenterologist at Children's Health℠ and Professor at UT Southwestern, for help.

"Our friend's husband had worked for Children's Health in the past and told us about Dr. Barth's great reputation," says Marlo. "He thought Dr. Barth could probably help us figure out what was going on with Preston."

At Preston's first appointment with Dr. Barth, blood work and a colonoscopy confirmed that he had Crohn's disease, a chronic inflammatory bowel disease (IBD) that causes inflammation in the GI tract.

"It wasn't what we wanted to hear, but at least we had an answer," says Marlo.

Dr. Barth prescribed an oral steroid, which helped mitigate Preston's symptoms, and began working with his family to determine a long-term medication solution. The goal of the Southwestern Pediatric IBD Center at Children's Health is to achieve steroid-free remission for patients, and they do so in more than 80 percent of cases.

Preston and his family decided on an injectable anti-inflammatory medication used in many patients with moderate to severe Crohn's disease. It worked, but it wasn't without unfortunate side effects.

"When I gave Preston his shots, the injections hurt him so badly he would scream in pain," says Marlo. "We knew the medicine was working, but we both dreaded each time it was time for his next shot."

A caregiver advocates for Preston 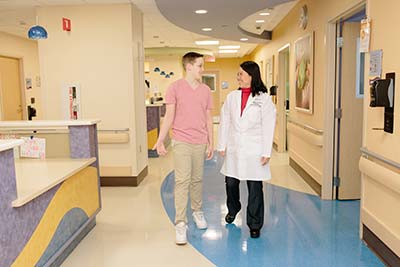 Preston's family soon learned that a new form of his medication was available, which was expected to be less painful than what he was currently taking. When they went to fill his new prescription, however, the family learned that their insurance declined to cover it because the current medication was already working.

For Phuong Luu, P.A., who was part of Preston's care team, that was unacceptable. Phuong spent six hours talking with the insurance company to explain why Preston needed to switch medications. Her persistence paid off, and soon, Preston's injections were pain-free.

"You should have seen Preston's expression when the medicine did not hurt going in," says Marlo. "He hugged me so tight and seriously cried tears of happiness."

Today, more than two years after his diagnosis, Preston is doing well. Though he does experience occasional flare ups of his symptoms, his Crohn's disease is largely in remission. His dad, Brenden, recalls Preston's initial angst when he was diagnosed and thought the condition would mean a life without sports. "I quickly logged on to do a search for NBA players with Crohn's and was happy to show him that there are many professional athletes with digestive diseases," he says. "There is hope." 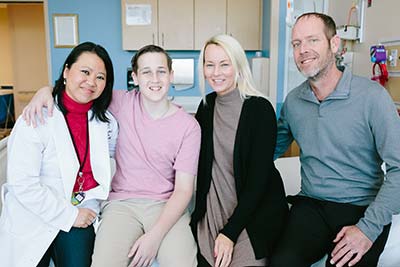 Now, Preston plays on his school basketball team. On a recent visit to Children's Health, Preston met the Director of the IBD program – Ashish Patel, M.D. The two discovered that they have a sports rivalry as Preston cheers for the Dallas Mavericks and Dr. Patel is a devoted San Antonio Spurs fan.

"Preston has such a fun personality, which was impacted when he was sick, but now that he feels better, he's back to his old self," says Marlo. "We cannot thank the Children's Health care team enough for fighting for him and caring so much."

Ranked among the best in the nation by U.S. News & World Report, the Gastroenterology department at Children's Health is home to the Southwestern Pediatric Inflammatory Bowel Disease (IBD) Program, a leading multidisciplinary program of excellence in the care of children with IBD. Learn more about our program and services.