Paisley's journey from 100 seizures a day to living seizure-free

Diagnosed with epilepsy at age 4, Paisley found relief from seizures after brain surgery at Children's Health

Paisley is a little girl with a big personality. She's a kind friend, a curious learner and an energetic athlete who wants to be a cheerleader when she grows up. The past year has been a big one for Paisley: She started kindergarten and welcomed a new, four-legged member to her family. But most notably, the 5-year-old also underwent brain surgery and found relief from the nearly 100 epileptic seizures she used to have each day.

A seizure during soccer leads to a life-changing diagnosis

In September 2018, Paisley began having difficulties at bedtime, frequently having a crying spell just as she was falling asleep. Her parents, Brooke and Andy, thought she may just be having dreams that startled and woke her.

But one Saturday morning while Paisley was warming up for a soccer game, the right side of her body stiffened up. She appeared confused, and by the time she made her way over to the sidelines to tell her parents she wasn't feeling well, her father, a firefighter, could tell something was seriously wrong.

Brooke and Andy brought Paisley to the emergency room at Children's Medical Center Dallas, where doctors confirmed she had experienced a seizure. A team of neurologists performed an extensive exam and ran tests to determine a cause. Since she had no family history of epilepsy and was not experiencing any other health issues, Paisley was able to return home the same day with directions to start an anti-epileptic medication.

By Monday evening, however, Paisley began having seizures again. When they didn't subside – even after following instructions given by the on-call neurologist to increase her medication dosage – her parents brought her back to Children's Health℠. 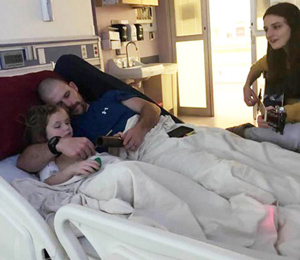 Paisley remained in the hospital for the next month, having more than 100 seizures some days, as neurologists and epileptologists from the Level 4 Epilepsy Center worked to find an effective treatment. She underwent a round of high-dose steroids as well as plasmapheresis and Intravenous immunoglobulin therapy – but nothing seemed to be working.

"Paisley's case was difficult because she was a typically developed child before her seizures began," Andy says. "That made it harder to diagnose her because she wasn't exhibiting any other symptoms or experiencing any other developmental challenges at the time."

The hospital stay was wearing on Paisley, despite several visits from Child Life Specialists, Music Therapists and – Paisley's favorite – Van, one of the pet therapy dogs at Children's Health. Brooke and Andy felt confident that they could manage her seizures at home so they began making plans for Paisley to be discharged from the hospital. 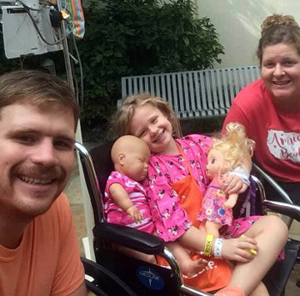 Before they left, Andrea Raphiela Lowden, M.D., Pediatric Neurologist at Children's Health and Assistant Professor at UT Southwestern, suggested that Paisley begin some of the preliminary tests required before brain surgery. While her parents weren't ready to move forward with surgery for Paisley, these tests would help if they decided to explore that option.

A radiologist used a 3 Tesla MRI – twice as strong as a standard MRI machine – to capture highly detailed images of Paisley's brain. Imaging revealed the root of Paisley's seizures: She had cortical dysplasia, a congenital brain defect that is one of the most common causes of epilepsy.

Over time, Paisley continued to have constant seizures, and after exhausting all other treatment options at home, Brooke and Andy were confident that surgery was the answer.

"At the beginning of her journey, we wanted so badly to avoid surgery," Andy says. "But by November, her quality of life had declined so rapidly that we realized it was her best option."

In December, Brooke and Andy met with Angela Price, M.D., Pediatric Neurosurgeon at Children's Health and Assistant Professor at UT Southwestern, about the surgery. Dr. Price explained what to expect during and after surgery, which would be done through two procedures.

"Based on where doctors suspected Paisley's seizures originated from, they told us that she may not be able to talk or move her body after surgery," says Andy. "But Dr. Price was so confident that surgery would help, we knew she was going to do what's best for our child." 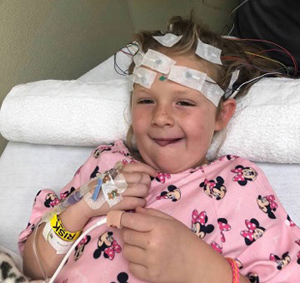 One week before Christmas, Paisley came in for surgery.

First, Dr. Price removed a portion of Paisley's skull to expose her left frontal lobe and implanted electrodes in her brain. This allowed doctors to perform a video EEG to reveal where the seizures were originating from. After the electrodes were implanted, Deepa Sirsi, M.D., Pediatric Neurologist at Children's Health and Associate Professor at UT Southwestern, stimulated different parts of Paisley's brain to map its various functions and determine what affected areas were safe to remove.

During the second procedure, Dr. Price removed as much of the affected areas of Paisley's brain as she felt safe at the time, including most of the dysplasia as well as another area of her brain that was contributing to her seizure activity.

"Part of the affected areas of Paisley's brain controlled her motor movement, so it couldn't all be removed," Andy says. "But Dr. Price was confident that with the amount of cortical dysplasia she was able to remove, we would be able to control her seizures with medication." 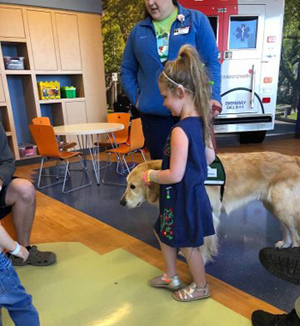 After surgery, Paisley appeared to be recovering physically, but she wasn't speaking and her personality had shifted. "It made us second-guess ourselves since she had always been so outgoing before," Andy says.

As her family worked on recovery, Paisley received a helpful visit from a Child Life Visit who brought her a brand-new stuffed dog – her very own mini "Van" doll. She was able to go home the next day.

After a few months, Paisley's joyful disposition returned, and, much to her parents' delight, she was soon back to her old self again. Most importantly, she was seizure-free.

Today, a year after her symptoms first started, Paisley is thriving. 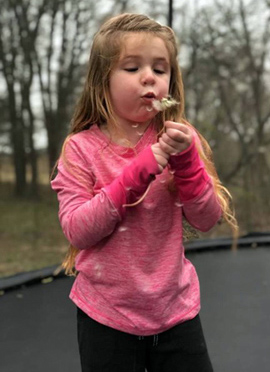 She's enjoying school, another season of soccer with friends – and a new service dog, Toddy. Now in the beginning stages of his training, Toddy is already providing a great deal of comfort and support to Paisley and her entire family.

"Even though Paisley is currently seizure-free, we know that she'll most likely require adjustments to her care and medication over the years," Andy says. "We are grateful that she will have Toddy to help support her, physically and emotionally, as she grows up."

Dr. Lowden continues to monitor Paisley's progress through regular visits as well as through the MyChart App, which allows Brooke and Andy to easily communicate with her care team and send updates.

Designated as a Level 4 Epilepsy Center by the National Association of Epilepsy Centers, Children's Medical Center Dallas provides the highest level of treatment for the most complex cases of pediatric epilepsy, with additional advanced epilepsy treatment options available at our Level 3 Epilepsy Center in Plano. Learn more about our program and services.