When Jireh was 14 years old, his mom Sharonda rushed him to the doctor on a weekend because she was afraid he was having an extreme allergic reaction to something he had eaten. His face had swollen up significantly and, initially, his doctor came to the same conclusion but asked for a urine sample just in case. To everyone’s surprise, the urinalysis detected there was blood in the sample, and Jireh was referred to Children’s Health℠ for additional testing.

He was admitted to Children’s Health where he was evaluated by experts in the Nephrology department. The team performed a biopsy on a sample from his kidney and diagnosed Jireh with focal segmental glomerulosclerosis, or FSGS for short. FSGS is a rare disease that affects the kidneys’ ability to filter blood in the body and is one of the causes of nephrotic syndrome, which can ultimately lead to kidney failure.

Unfortunately for Jireh, his kidneys were already in renal failure, but Mouin Gerios Seikaly, M.D., a pediatric nephrologist at Children's Health, was hopeful that it could be managed through medication. The medicine worked for a while, but in August 2016, his kidneys’ function had declined so much that he needed to go on dialysis three days a week for four hours at a time.

It hasn’t been easy, but his mom Sharonda says the support they’ve received from the Children’s Health Nephrology department and dialysis team has made a huge difference. 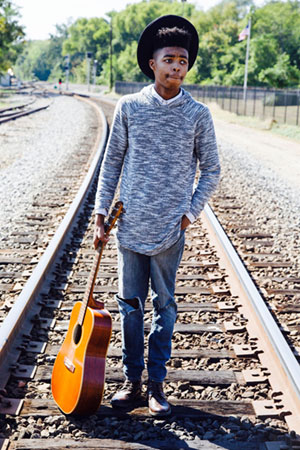 “They are like family to us,” she says. “As soon as we walk through the door and start seeing all the familiar faces it helps ease our minds and puts a smile on Jireh’s face.”

Sharonda says her son continues to meet each new challenge with a positive outlook fueled by his faith, the support of his family and...his love of music.

Jireh, the son and grandson of a preacher, has grown up in his church’s choir, singing and filling in for pretty much whatever instrument was needed on a particular Sunday. So it makes sense that during one of his biggest challenges in treatment, it was music that helped pull him through.

“One day in the hospital, we noticed that Jireh seemed to be a little down, which was incredibly unusual for him,” his mom says. “One of his nurses knew about his love for music and suggested that he visit Seacrest Studios and play around a bit on the instruments.”

Jireh and his aunt, who is also a singer, went downstairs to the studio, and to say that he enjoyed himself is an understatement. His mom says his entire mood was lifted when he got back.

“He sang and played around on the piano and - though I didn’t know it at the time - he began writing a song that helped him put into words some of the things he had been feeling that day,” she says. “He titled it, ‘The Cure.’”

Music continues to be a huge part of Jireh’s life and future plans. He’s currently on the waiting list for a kidney transplant and says that after that, he hopes to attend Full Sail University to further pursue his musical passions.