Libby from Amarillo found out during a routine ultrasound at 24 weeks gestation that her baby girl had several serious heart defects. Natalie would need treatment for hypoplastic right heart syndrome, which causes the right side of the heart to be severely underdeveloped, along with tricuspid atresia, ventricular septal defect (VSD) and atrial septal defect.

"I'm thankful every day we knew ahead of time because some people find out at birth," Libby says. "We felt very fortunate to have time to put plans in place."

'Our baby was in the right hands'

After consulting with the team at Children's Health℠, Natalie's parents rented a corporate apartment in Dallas and arrived five days prior to the scheduled delivery date. After Natalie was born, the Children's Health transport team brought her in to see Libby before making the trip to Children's Medical Center Dallas.

"As much as we hoped and prayed the diagnosis would change, it didn't," Libby says. "But we were at peace and knew Natalie was in the right hands. I was able to touch her before she left the hospital with my husband, and once she was at Children's, they set up a video conference, so I could ask the team questions."

Once discharged from the hospital, Libby went to Natalie's bedside in the Cardiac Intensive Care Unit.

"I didn't know how I was going to react with all the wires in her," Libby says. "It was emotional, but she looked beautiful."

Initially, Natalie was just observed because she appeared to have enough blood flow to her lungs to maintain good oxygen saturations.

"By a miracle, Natalie did not need surgery the first week," Libby says. "In fact, she was the small percentage that was able to hold off. The surgeon told me this never happens, but it happened to Natalie."

The valve to her lungs was abnormal, however, and the area under the valve was obstructed with heart muscle which limited the amount of blood flow going to the lungs over time. She was discharged, but her saturations decreased, and she was readmitted for a shunt.

Natalie was taken to the operating room for a modified Blalock Taussig shunt procedure. This procedure is where a tube is sewn between the arm artery and the lung artery, during the procedure she developed a problem with coronary flow and heart function. At that point, Natalie was placed on the transplant list in a hold status.

"After we found out Natalie would be on the transplant list, a nurse sat for hours with me to explain everything and answer all my questions," Libby says. "Everyone at Children's not only cares for the child but the parents, too."

A home away from home 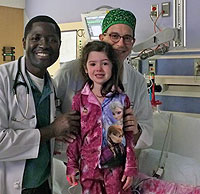 Several weeks later, the shunt procedure was performed successfully. She was then followed as an outpatient and was admitted at 6 months old for a Glenn shunt which connects the great veins from the upper body to the lung vessels. After Natalie recovered, they moved back home to Amarillo.

"I think the hardest thing I have done, besides watching my child go through the operating doors, is going home," Libby says. "We had such a huge support group at Children's, it truly felt like a home away from home."

At 3 years old, Natalie underwent a fenestration Fontan procedure which is a tube that connects the lower vein drainage that goes to the heart to the pulmonary artery. A couple of years later, Natalie experienced persistent blueness and had her fenestration successfully closed in the Pogue Catheterization Lab at Children's Medical Center Dallas.

Natalie is a thriving kindergartener 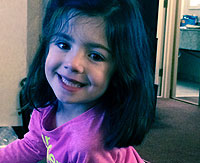 "Natalie is doing great," says Thomas Zellers, M.D., Interventional Cardiologist at Children's Health. "Hopefully she is done with any surgeries and now is to be followed clinically at least yearly. We will look for changes in heart function and for any heart rhythm problems."

"We could not have asked for better caregivers or experience at Children's even during such a difficult time," Libby says. "Natalie is an active kindergartener, and we are so grateful."