"Mighty Mia" shows her strength from day one

After experiencing a severe brain injury at birth, Mia finds the specialized care she needs at Children's Health

Michele's pregnancy with their first-born daughter, Mia, was, "beautiful," as her husband Michael puts it.

"Michele had no issues," he says. "And we had every reason to believe that Mia would be born healthy." 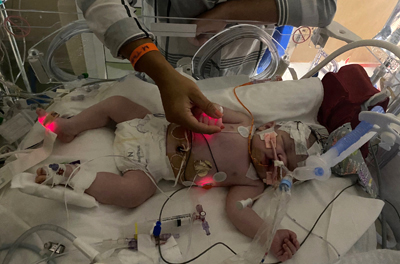 In July 2020, however, Michele went into labor, which was fraught with unexpected challenges. After pushing for nearly five hours, Mia was born, but she wasn't breathing. Doctors worked to intubate her and administer medications to revive her, and she was rushed to the hospital's Level III neonatal intensive care unit (NICU) for more support. The NICU physicians determined that Mia had suffered a hypoxic brain injury during delivery and would require hypothermic treatment to cool down her body to prevent any further brain damage – a therapy unavailable at the hospital where she was born.

Mia was sedated and transferred by ambulance to the Level IV NICU at Children's Medical Center Dallas where she was met by Asya Asghar, M.D., a Neonatologist at Children's Health℠ and Assistant Professor at UT Southwestern. The team quickly worked to begin cooling her body to protect her brain and continued other critical treatments to give Mia a fighting chance.

"The first day was very chaotic," Michael says. "Michele was still recovering from labor and delivery at the other hospital while Mia was engaged in a battle for her life."

Michele was able to join Michael and Mia at Children's Health later that evening, and for the next week, the new parents were forced to wait and see what their future would hold. 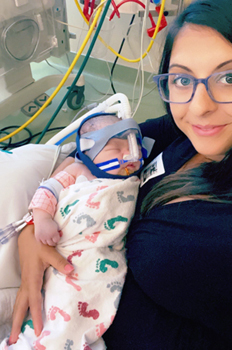 "In a time of uncertainty as Mia arrived, I could promise Michael that our team was going to act quickly and do our best for Mia," says Dr. Asghar. "Mia would tell us her story and we would listen to her."

From day one, Mia showed what a fighter she would become.

"Mia improved every day," Michael says. "Her levels were improving daily, and it seemed like each day a new IV line or catheter or medication was removed from her care because she no longer needed it. After a few days, as more machines were removed from her hospital room, Michele and I looked around and realized it was beginning to look more and more like a ‘normal' room each day."

After three days, doctors soon began re-warming Mia's body. She was weaned off all of her supporting medications by the fifth day, which marked the first time Michele and Michael were able to hold her, and was breathing on her own by day four. 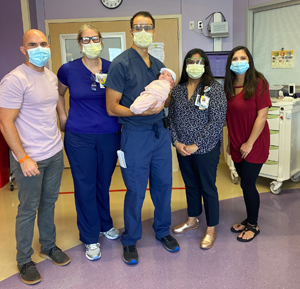 When she was one week old, an MRI was taken of Mia's brain to assess the damage. After reviewing the scan, Jennifer Thomas, M.D., a Pediatric Neurologist at Children's Health and Assistant Professor at UT Southwestern, informed the family that Mia had severe hypoxic-ischemic encephalopathy (HIE), a brain injury that occurs when a baby's brain does not receive enough oxygen at birth, and that Mia may have a high risk of having significant challenges with her future development as she grew up, including seizures.

Still, Michael and Michele had hope for their daughter's future. Mia began anti-seizure medication, and her parents and care team, which included Drs. Thomas and Asghar, focused on supporting her feeding efforts and physical therapy to ensure her movements were efficient and that she had a full range of motion.

"The Friday we got Mia's diagnosis was certainly a low point for us," Michael says. "But from that day on, every day was a success. She continued to make progress and there was no going backwards for her." 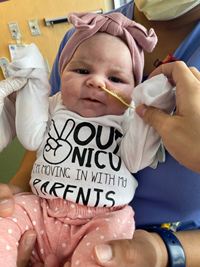 After almost a month in the NICU, Mia was ready to go home. She continued physical therapy to support her motor skills and soon was eating well enough on her own that she no longer needed the NG tube that had helped supplement her feedings since birth.

Just like she did in the NICU, Mia continues to astonish everyone with her strength and progress. 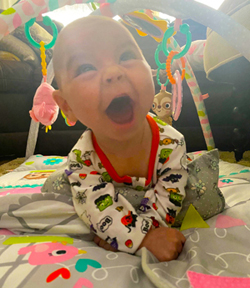 "Mia's progress has been tremendous," Michael says. "She is only on one daily medication to prevent seizures and has incredible leg strength. She loves standing on the table when we hold her, and we are hopeful she will walk."

Mia may have an EEG at 6 months of age to show Dr. Thomas how her brain has developed and determine if she can wean off her seizure medication, but Michael and Michele are resolute that it won't diminish their hope for Mia's future, no matter what the picture says.

"What we've been told about her diagnosis and how she is doing on a daily basis just doesn't add up so far – in a good way," Michael adds. "At this age, it's hard for anyone to notice that anything may be different if they don't know already. She's simply phenomenal."