Managing her EoE isn't easy, but Bella refuses to give up

After years of dealing with a chronic illness, Bella is hopeful for a solution thanks to experts at Children’s Health

Bella is the modern version of a Renaissance (wo)man. She's a high school junior who excels in academics and manages the school wrestling team. She has a close-knit group of friends and family, was recently promoted at her job and is a talented vocalist who is teaching herself to play guitar. She is also in the midst of a life-changing search for answers as she manages a chronic illness that has knocked her down several times in her life – but Bella refuses to give up.

When Bella was 14 years old, she began getting very sick, throwing up multiple times a day and unable to keep food or water down. Her pediatrician suspected she may be suffering from a herniated stomach and referred her to a specialist for additional testing. The gastroenterologist diagnosed her with eosinophilic esophagitis (EoE), a rare disorder in which elevated levels of eosinophils (a type of white blood cell that fights allergens) in the esophagus cause inflammation that leads to problems eating and drinking.

"Basically, she told me that I was allergic to a food, but we didn't know what it was," says Bella. "And instead of having an external reaction, like hives, my reaction is internal. My esophagus becomes inflamed and irritates the top of my stomach, which makes me severely ill."

Her doctor prescribed her an over-the-counter heartburn medicine, which kept her condition in remission for about two years.

Around the time she turned 16, Bella's EoE symptoms returned, and she also began experiencing periodic blurred vision, a burning sensation on her skin, slurred speech and difficulties with her gross motor skills.

"I remember I went to church one night, and all of a sudden, my skin felt like it was on fire and I just didn't belong in my body," says Bella. "All my nerves felt like they were tingling, and I knew something was wrong."

Bella called her doctor, who thought she may be experiencing an allergic reaction to the medication she was taking and suggested she go to the nearest emergency room. But the doctors in the ER couldn't find anything wrong.

After several similar episodes, Bella's allergist believed her new symptoms had nothing to do with her allergies and referred her to Lauren Dengle, M.D., a pediatric neurologist at Children's Health and Assistant Professor at UT Southwestern.

"When I came to Children's, I felt like it was the first time someone really took the time to listen to me and try to figure out what was really going on because they believed me," says Bella.

Dr. Dengle worked with Bella and her family to systematically rule out a number of possibilities before diagnosing her with conversion disorder, a condition where a child has physical symptoms that can't be explained by a medical reason.

"For Bella, her body physically reacts to the emotional stressors that are going on in her body," says Alesia, Bella's mom.

Since conversion disorder symptoms are often triggered by extreme stress, Dr. Dengle and Bella discussed ways to identify when her stress levels may be increasing and how to manage them to mitigate the effects it has on her body. For Bella, that often means turning to music.

"I've learned that when I feel my stress levels start to rise, it's time to go to my room and play guitar or write a song for an hour," says Bella. "Music challenges me, but it's a happy challenge for my brain to work on and a great release for me."

The team explained to Bella that she could plan to manage her EoE by relying on medication for the rest of her life, or they could work together to determine what was causing her condition through an elimination diet.

In true Bella fashion, she chose to meet the challenge head-on through an elimination diet.

"I wanted to find out exactly what was causing all my problems," says Bella.

Bella began eliminating certain foods -- such as gluten, acidic foods and dairy -- from her diet and then systematically reintroducing them back in to see if her EoE would flare up. As she reintroduces new foods, doctors examine her esophagus through an upper endoscopy to determine if it is inflamed. So far, Bella still is unaware of what food is causing her issues, but she's hopeful she will soon have answers.

Bella is also participating in research to determine how to improve care for children dealing with EoE. Once she heard the goal of the study, there was no question in her mind that she wanted to participate.

"I remember being the child who was sick to my stomach and my mom was scared because she had no idea what was wrong with me," says Bella. "If the study could give me a chance to help prevent someone else from going through the same thing, I knew I had to take it."

At 17, Bella will soon transition to adult care – something she and her care team have already discussed. And while it will no doubt be a significant change in Bella's life, she says that she's confident it will be a smooth transition and is not worried about it – which is music to her mother's ears. 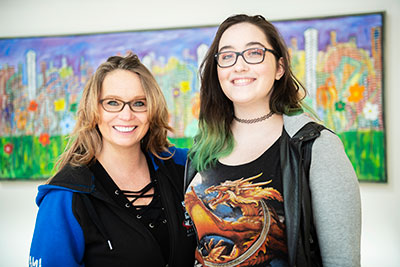 "When you have a child that is constantly feeling out of balance, it's really valuable to know that her standard of care will remain the same as she becomes an adult," says Alesia. "I appreciate the team's ability to communicate effectively and set expectations so there are no surprises."

Given Bella’s resilience, the DEEP team has confidence that Bella will thrive moving forward in all that she does.