Luis was diagnosed with retinoblastoma, a rare cancer of the retina, when he was just 7 months old. It’s a day his mother, Crissty, will never forget for two reasons. First, the obvious: It was the day the terms cancer, chemotherapy, survival rate and prognosis entered their vocabulary. But even more than that, it was also the first time Luis called her “mama.” Understandably, Crissty likes to focus on the latter milestone.

Still, looking back, she now realizes the diagnosis and treatment were all a part of her son’s journey to become the inquisitive, incredible young man – and published author – that he is today, a now healthy and thriving child who continues to inspire those around him.

“Luis is like an angel to me,” Crissty says. “Cancer was such a big experience for both of us, and he has always dealt with it very wisely and well beyond his years.”

Retinoblastoma is usually diagnosed before a child’s third birthday. While the prognosis is very good when the cancer is caught before it has spread, often doctors must remove the affected eye – as in Luis’ case. Though he doesn’t remember his initial visits at Children’s Health℠ – he was just an infant during surgery and subsequent chemotherapy treatment – Luis remains a patient in the ACE (After Cancer Experience) program, aimed at providing long-term monitoring for children, adolescents and young adult survivors of childhood cancer.

It has been more than 10 years since his last chemotherapy treatment, and he has a strong support system of family, teachers and friends. But it hasn’t always been easy. In first grade, Luis was bullied by classmates about his glass eye. As is his style, however, instead of letting it get him down, he used those experiences as inspiration for his first published book, Todd the Odd Boy, a story about bullying, forgiveness and redemption. For Luis, writing serves as a form of healing and positive expression. 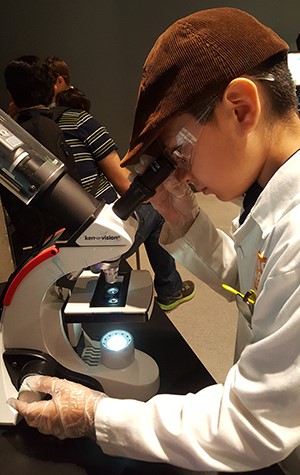 “Writing softens the mind and makes me feel happy,” Luis says. “I wanted to express my feelings about my experiences so hopefully, people who may have the same problems I did will feel happy and speak up to talk about their feelings.”

Luis has plans to write additional books to encourage even more people, but also has his sights set on a career that makes an impact in a slightly different way – as a scientist.

“When I was 8 years old, I visited a science museum that had an interactive DNA exhibit,” he says. “Since then, I’ve wanted to be a scientist to work on discovering cures for cancer like mine and Alzheimer’s disease as well as other conditions.”

Much can be said about the remarkable story of Luis’s fighting spirit and wisdom beyond his years, having battled cancer at such a young age. But perhaps what is most amazing about his story is how he continues to dream big and make such a positive impact on all those around him.