When an undiagnosed congenital heart condition led LJ to collapse on the basketball court, he found expert care at Children's Health 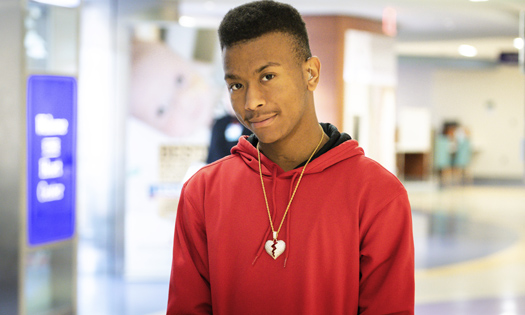 At 13 years old, LJ was an active, healthy student-athlete from Paris, Texas. He played football and basketball, was in the school's marching band and had the usual teenage aspirations – get a job, save up for a car and hang out with friends.

But then, an undiagnosed congenital heart defect put LJ's aspirations – and his life – on the line.

LJ collapses on the basketball court

It all started on December 12, 2017. The night before, LJ and his basketball team had an away game that was a long drive there and back. "I woke up the next morning, extremely tired and really sluggish," LJ says. "I thought it was because I got home from the game so late."

At practice after school that day, the team ran laps inside the gym.

"We all started running, and I felt like I couldn't keep up," says LJ. "As I got slower, my coach kept telling me to pick it up. I did my best, but it made it worse."

The next thing LJ remembers is hitting the ground, and seeing his teammates and coaches surround him. And then, he stops remembering.

LJ was taken to a local hospital, and the school staff contacted his mom, Valarie.

"At first, I thought it was just to get him checked out, and that he just needed some fluids," says Valarie. "That was not the case."

LJ had experienced a massive heart attack. His condition was quickly deteriorating, and he needed to be transported to Children's Medical Center Dallas.

The Children's Health℠ transport team arrived via helicopter and explained next steps to Valarie and her husband, Anthony.

"They told me they weren't stopping until they got to Children's Medical Center Dallas," she remembers. "What that team did, I have no doubt they saved his life."

But this was just the beginning of LJ's journey. He would spend the next seven and a half months at Children's Health, fighting for his life and courageously working towards recovery. 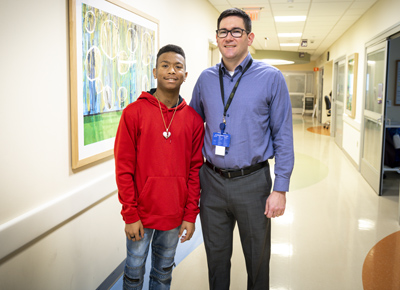 Ryan Butts, M.D., Medical Director of the Heart Failure and Heart Transplant team at Children's Health and Associate Professor at UT Southwestern, explains that LJ's heart had failed because of a congenital coronary abnormality. He was placed on Extracorporeal Membrane Oxygenation (ECMO), a machine that replaces the function of the heart and lungs to keep him alive.

LJ needed a heart transplant, and his condition also affected his other organs, including his kidneys, which went into failure. While LJ waited for a new heart, the Heart Center team implanted a ventricular assist device (VAD) to help his heart continue to pump.

"Without the use of the VAD, LJ would not have made it to transplant," Dr. Butts says.

On January 10, 2018, a heart became available for LJ. His heart transplant surgery was successful, but as he struggled to recover, he was placed back on ECMO.

Valarie remained by her son's side, trusting in her faith and his medical team.

Four days after his transplant, Valarie got her wish. LJ woke up for the first time since his heart attack.

"That day when he woke up, that was the best day," she remembers. "He looked at me and told me that he loved me."

An incredibly long road to recovery – with incredible support

LJ faced an incredibly long and difficult road to recovery. He had gone from being a healthy athlete to being too weak to sit up. Over the next few months, LJ was on continuous dialysis, had a feeding tube and faced multiple medical setbacks, but he had his family and care team by his side.

One nurse in particular, Lainey, was determined to help LJ take small steps towards recovery every day.

"I guess you could say I was hard-headed," LJ laughs. "But Lainey would tell me that I had to sit up, even if I didn't want to. And after a while, I decided I wasn't going to be like this for the rest of my life. I started to force myself to do the difficult things that I needed to get better."

LJ eventually got used to the schedule Lainey made for him, making sure he got up every day to work on occupational and physical therapy.

"I worked with LJ every day for nearly eight months, and there were times we weren't sure he was going to make it," says Lainey. "But one day, I came to help him stand up next to his bed. He didn't want to get up at first, but I played music he liked, and we got him standing. All of a sudden, I could feel him swaying back and forth to the music – and that's when I knew he was going to get better. And not only did he make it, but he's awesome. He's making the most of his life, and he's truly a miracle."

LJ looks to the future with determination and hope

On July 17, 2018, LJ was discharged from the hospital. His care team lined the hall with pompoms and cheered him on as he left. 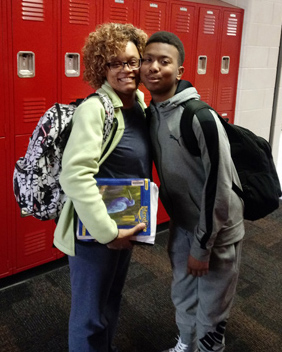 Today, LJ is on the waitlist for a kidney transplant and has dialysis three times a week but has returned to school and is back in the marching band. He just celebrated his 16th birthday and is looking forward to the future.

Both Dr. Butts and Lainey attribute LJ's determination and recovery to the support of his family.

"By many medical standards, LJ should not have survived," says Dr. Butts. "To see him back at school and living his life is really impressive, and I think that has a lot to do with his mom and his family. They didn't give up and they kept pushing him."

Valarie is grateful to have her son home but will never forget the people that saved his life.

"You have some special people here at Children's Health, and I don't know of one of them that didn't work on my son. He would not be here if it weren't for them taking care of him every single day."

The nationally renowned team of pediatric cardiologists and subspecialists at Children's Health treat the whole spectrum of pediatric heart problems, with a commitment to excellence. Learn more about our Heart Center.